On Tuesday, the company announced the assay results from the Golden Eagle area which is located in the Republic/Eureka Mining District in Ferry County, Washington, USA and found the following initial drill results:

Note: All holes were drilled at angles of -45 to -90 degrees at azimuths designed to intersect targeted structures as nearly as possible to perpendicular when possible. Some drill holes and intercepts reported here did not cross mineralization perpendicularly and do not represent exact true widths.

Golden Eagle hosts a pit-constrained, measured and indicated resource of 2.02 million ounces at 1.4 g/t gold with an Inferred resource of 155,000 ounces at 0.9 g/t gold.

The deposit will provide future value to Calibre shareholders through additional drilling and modern metallurgical testing. 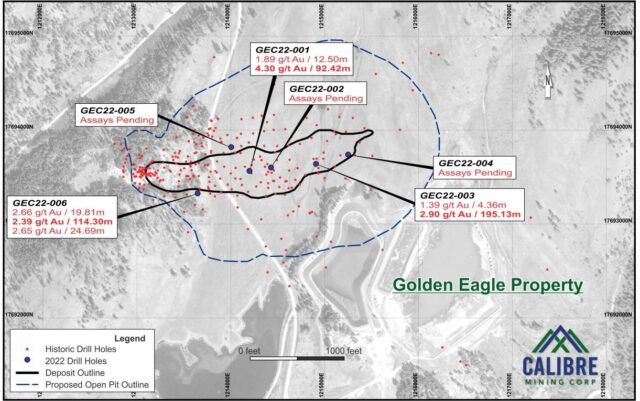 Golden Eagle is located in the northwestern portion of the Republic/Eureka district and includes the former Mountain Lion Mine which was active from 1898 to 1947.

The Republic/Eureka Mining District has produced nearly 4 million ounces of gold at an average grade of 19.89 g/t gold over the last 130 years, principally from high-grade underground narrow vein deposits. The last operating gold mine in the district was Kinross’ Buckhorn/Kettle River operation which closed in 2017.

“The first phase of this drill program confirms a robust mineral system with consistent gold grades over broad widths.”

Hall said the Golden Eagle Project is a key asset within Calibre’s United States operating platform which includes the Pan Mine, Gold Rock and Illipah projects in Nevada.

Calibre has operations in Nevada, Washington and Nicaragua. It focuses on delivering sustainable value for shareholders, local communities and all stakeholders through responsible operations and a disciplined approach to growth.

Company stock went up by 3.64 per cent on Tuesday to $1.14 on the Toronto Securities Exchange.