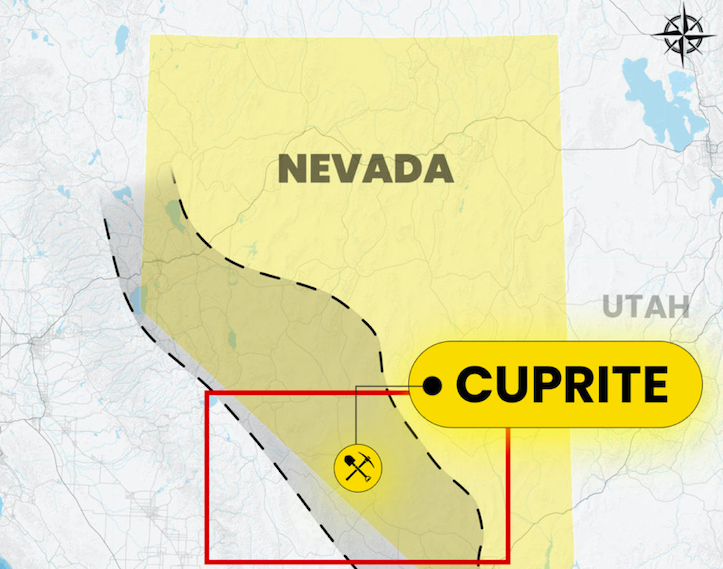 The Cuprite Gold Project is located in southwestern Nevada. Photo via Strikepoint Gold

On Monday, the company announced news of acquiring the Cuprite Gold Project from Orogen Royalties Inc. (TSX-V: OGN) (OTCQX: OGNRF) in exchange for about 6.4 million shares worth approximately $450,000, a $35,000 sum to reimburse Orogen for project-related expenses and a 3 per cent net smelter royalty (NSR).

Strikepoint says the acquisition will provide the company with a year-round exploration target in one of Nevada’s most unexplored districts, the Walker Lane Gold Trend.

Strikepoint’s stock rose by 6.67 per cent today to $0.08 while Orogen stock stayed flat at $0.51 on the TSX Venture Exchange.

“This acquisition establishes StrikePoint a year-round exploration target within the Walker Lane, perhaps the most underexplored district in Nevada,” said Michael G. Allen, President and CEO of Strikepoint Gold.

Under an agreement between Orogen and Altius Minerals Corporation (TSX: ALS) announced last September, Orogen will provide Altius with half of the shares acquired from Strikepoint and 1.5 per cent of the NSR thereby splitting the proceeds from Cuprite’s sale evenly between the two companies.

“The Alliance was formed to take advantage of the combined capabilities of Orogen and Altius and with a focus on targets with similar geologic characteristics to the major discovery at AngloGold Ashanti (JSE: ANG) (NYSE: AU)’s Silicon project, to which both Orogen and Altius hold royalty interests in that were generated through early exploration investments,” said Paddy Nicol, President and CEO of Orogen.

Nicol added that Orogen welcomed the technical expertise Strikepoint will bring to the Nevada project and that it was looking forward to observing the results of their future exploration endeavours there.

AngloGold Ashanti’s stock dropped by 0.22 per cent today to the equivalent of $30.17 on the New York Stock Exchange.