Some of the cheapest cannabis grown in Canada comes from the great outdoors.

Aleafia Health also today announced its first profitable quarter for the period ended Sept. 30, 2019 with a net income of $1.9 million, up from a loss of $11.5 million last quarter.

“Today, we believe that with our outdoor grow facility we are among the lowest-cost Canadian producers, while realizing a strong average revenue per gram sold. These results demonstrate the executional capabilities of our management team, with a clear path towards continued profitability for our young company,” Aleafia Health CEO Geoffrey Benic said in a statement.

Aleafia Health expanded its cultivation area by 60 acres by buying the land across the road for $1.2 million. Photo courtesy of Aleafia Health.

The production price of 10 cents per gram includes Aleafia Health’s operating expenses (such as paying your employees) and capital costs (such as irrigation, security infrastructure, and the newly built 460-square-metre drying facility).

But the low production cost doesn’t mean the weed is selling for cheap. In its third quarter update the company said it maintained some of the highest selling prices of its green crop, selling medical cannabis for $15.11 per gram, recreational pot for $6.40 per gram (offering similar prices as Hexo Corp.’s (TSX: HEXO)(NYSE: HEXO) black-market disruptive product), and wholesale prices of $6 per gram.

The Port Perry facility, around an hour outside of Toronto, was the first in the country to be granted an outdoor cultivation license by Health Canada June 7, 2019. The team wasted no time and planted out six acres in five days, but the late start on the growing season still limited the harvest. The plants produced around 1,000 kilograms of dried flower per acre this year, but that is predicted to increase by up to 200 kilograms per acre with an earlier start in the coming growing season. 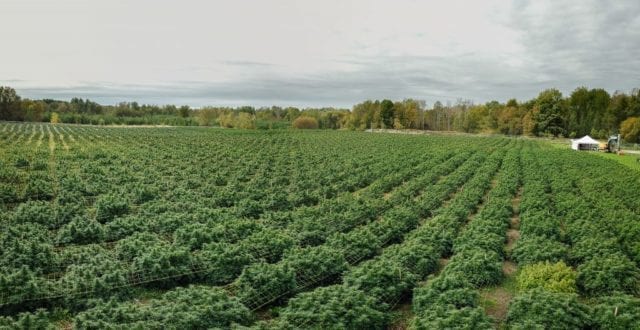 The Aleafia Health team was able to plant the company’s first six acres by hand in five days in June. Getting plants in the ground even earlier in the season will add around 200 kilograms of harvested dried cannabis flower per acre. Photo courtesy of Aleafia Health.

The company has aggressively expanded its cultivation space and will be growing in its newly minted 86 acre growing site for the coming year. At full capacity the facility is expected to produce 102,000 kilograms of dried cannabis flower for the 2020 season.

The outdoor pot has a slightly lower cannabinoid potency (THC and CBD) than indoor crops, and so far has successfully passed Health Canada quality assurance testing, which checks for things like microbial content, pesticides or contaminants, said the company.

“Aleafia Health has now reached the next phase in our development as we report our first profitable quarter. It saw us realize substantial improvements in all critical financial metrics, as we scale our cannabis health and wellness ecosystem in Canada and globally,” Benic said.

The company more than doubled its gross cannabis revenue since the last quarter, jumping from $2.5 million to $4.2 million and reported 94 per cent of its net sales were from packaged consumer products.