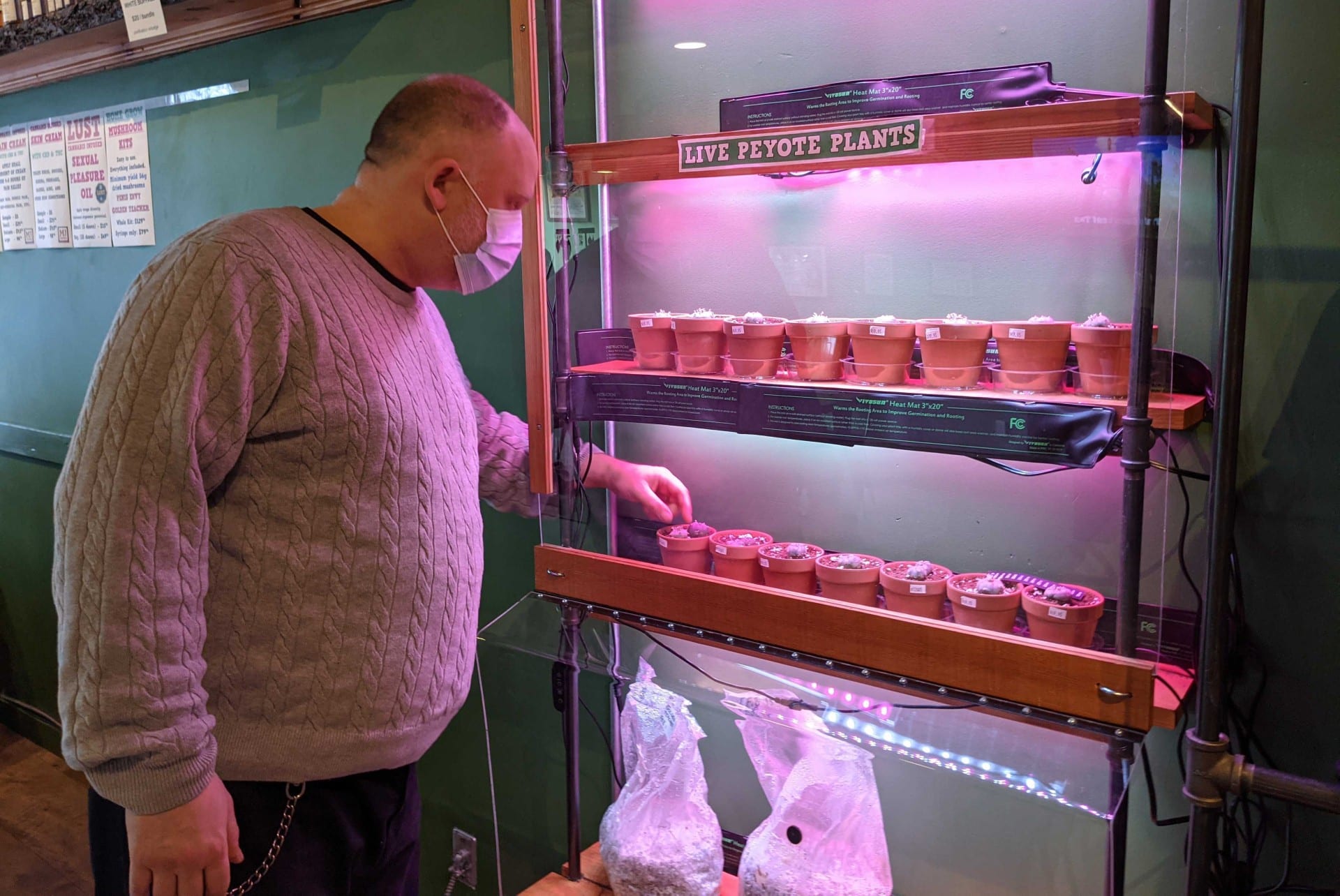 Nestled in Vancouver’s Downtown Eastside, the Coca Leaf Café is the only storefront in North America where you can buy Schedule I tea.

Owner and long-time drug activist Dana Larsen opened the shop on East Hastings Street last October. The café gets its name from a beverage it brews, a popular tea used to treat elevation sickness in many Latin American countries, which is made from the raw material for cocaine.

The unconventional coffee shop is decorated with visionary art and shelves of books on entheogenic plants. Helpful staff provide education to people wanting to learn about the plant medicines available there. 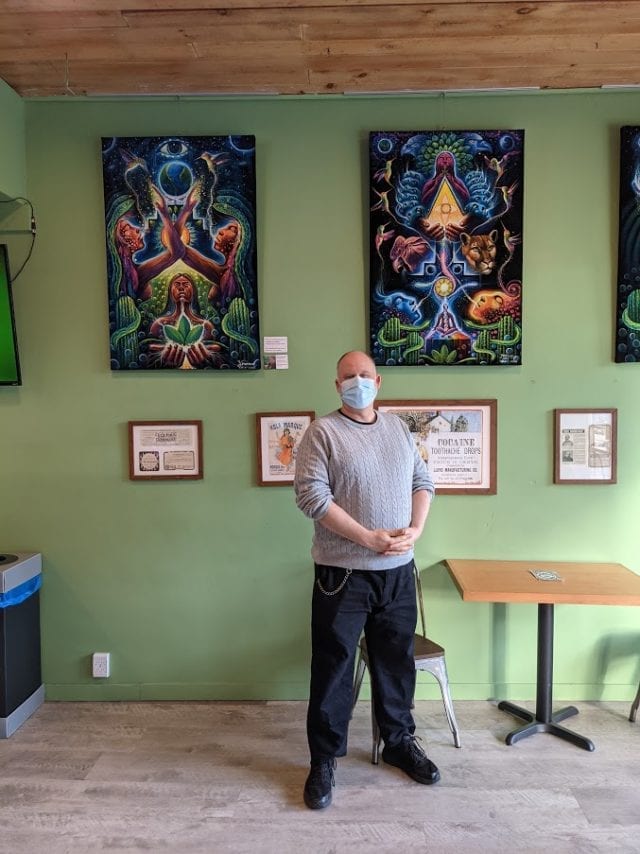 All of these substances are illegal to sell for human consumption.

According to Canada’s Controlled Drugs and Substances Act, a person carrying a Schedule I substance like coca leaves could be charged with a $1,000 fine or six months in prison as a first-time offender, and up to seven years of jailtime for more severe sentences. Kratom isn’t illegal to possess, but you can’t legally sell it for people to use.

Despite this, the Coca Leaf Café hasn’t been bothered by law enforcement, and owner Larsen doesn’t seem worried.

For him, running the shop is an act of civil disobedience as well as a business that provides access to what many people consider to be beneficial plant medicines. The café is also a way to move the drug reform conversation beyond cannabis, he says.

“I do expect one day, maybe soon, that Health Canada will write us a letter and come in and take our stuff but I’m not sure,” Larsen tells Mugglehead. “I’m clearly motivated by a higher purpose and I am political and an activist — I think that helps to contextualize what I am doing.”

The store is authorized to operate as regular coffee shop or café that adheres to food and safety regulations. But there aren’t any bylaws about selling mushroom kits or selling coca leaf, Larsen adds.

Most urban Vancouverites have probably tried a cappuccino, but what about a cocaccino?

Coca leaves are classified by Health Canada as not having any health benefits, but according to Larsen they have a number of beneficial properties and some people prefer coca leaf tea to coffee. 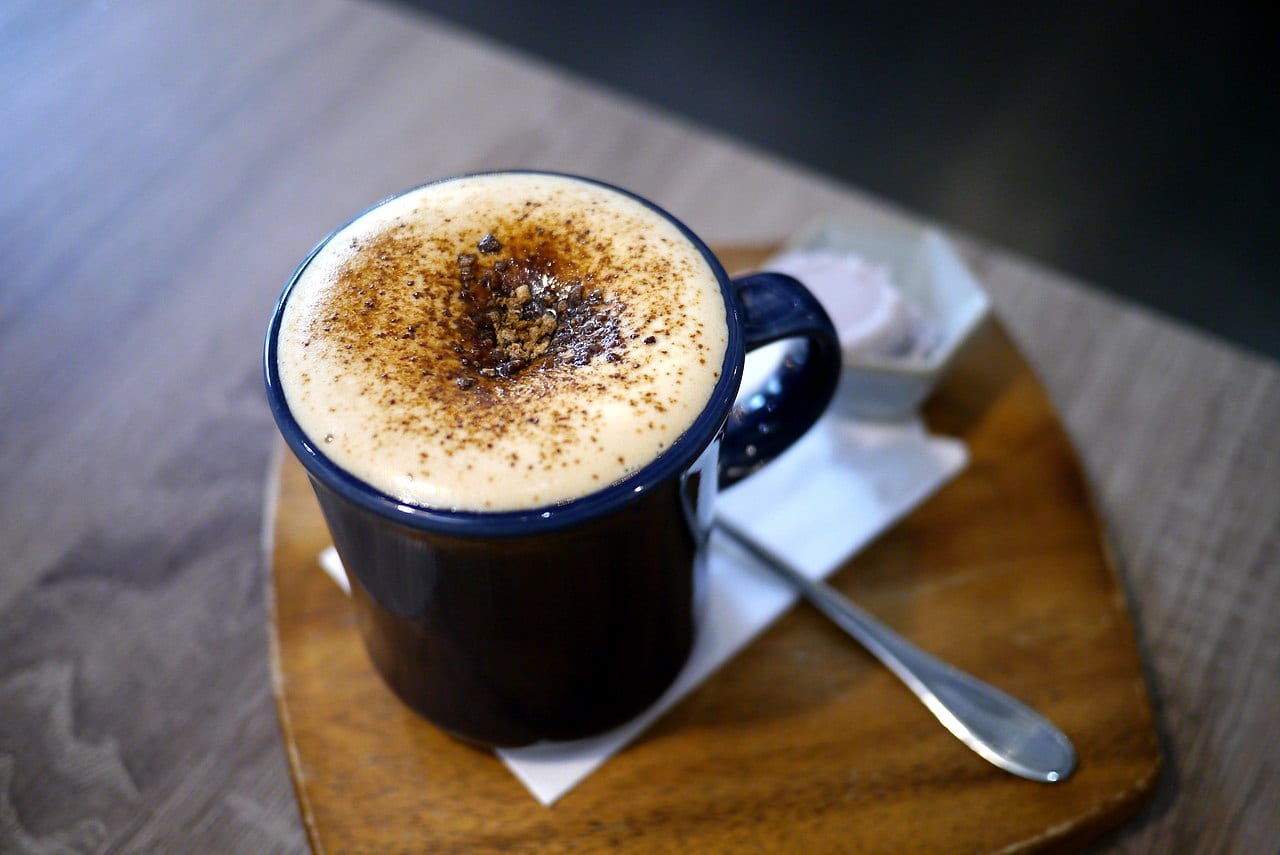 Many travelers to countries like Peru and Colombia, where coca leaf tea is used to combat elevation sickness, have experienced the mild buzz it offers. By selling it in familiar formats, like the cocaccino, Larsen has made the tea more accessible to urban tastes. Photo by Alex Chan via Wikimedia Commons

“It’s a good medicinal plant,” Larsen explains. “We had to work for a while to get a good coca tea recipe, and to Starbucks-ify it a little bit with the cocaccino, coca mocha and things like that.”

For centuries, coca plants have been used in South America and chewed by traditional Andean cultures as stimulants to suppress hunger, fatigue and thirst.

Tourists in Latin American countries, where coca leaves are legal and commonly used to make tea, sometimes make the mistake of returning with them without knowing they’re just as illegal as cocaine back home.

Some research confirms the leaves are effective at combating altitude sickness.

Larsen is aware he’s skirting the law, but says he doesn’t think the city will worry about closing the café when it has more pressing concerns like raiding unregulated weed operations like the Cannabis Substitution Project.

But the café’s biggest seller isn’t its namesake drink. It’s most popular product is kratom, a substance with opioid-like effects when taken in large doses and a stimulating when taken in small amounts.

The powder that Larsen sells comes from mitragyna speciosa, a tropical evergreen tree in the coffee family. The plant is native to Thailand, Indonesia, Malaysia, Myanmar, and Papua New Guinea, where it’s been used as herbal medicine since at least the nineteenth century. 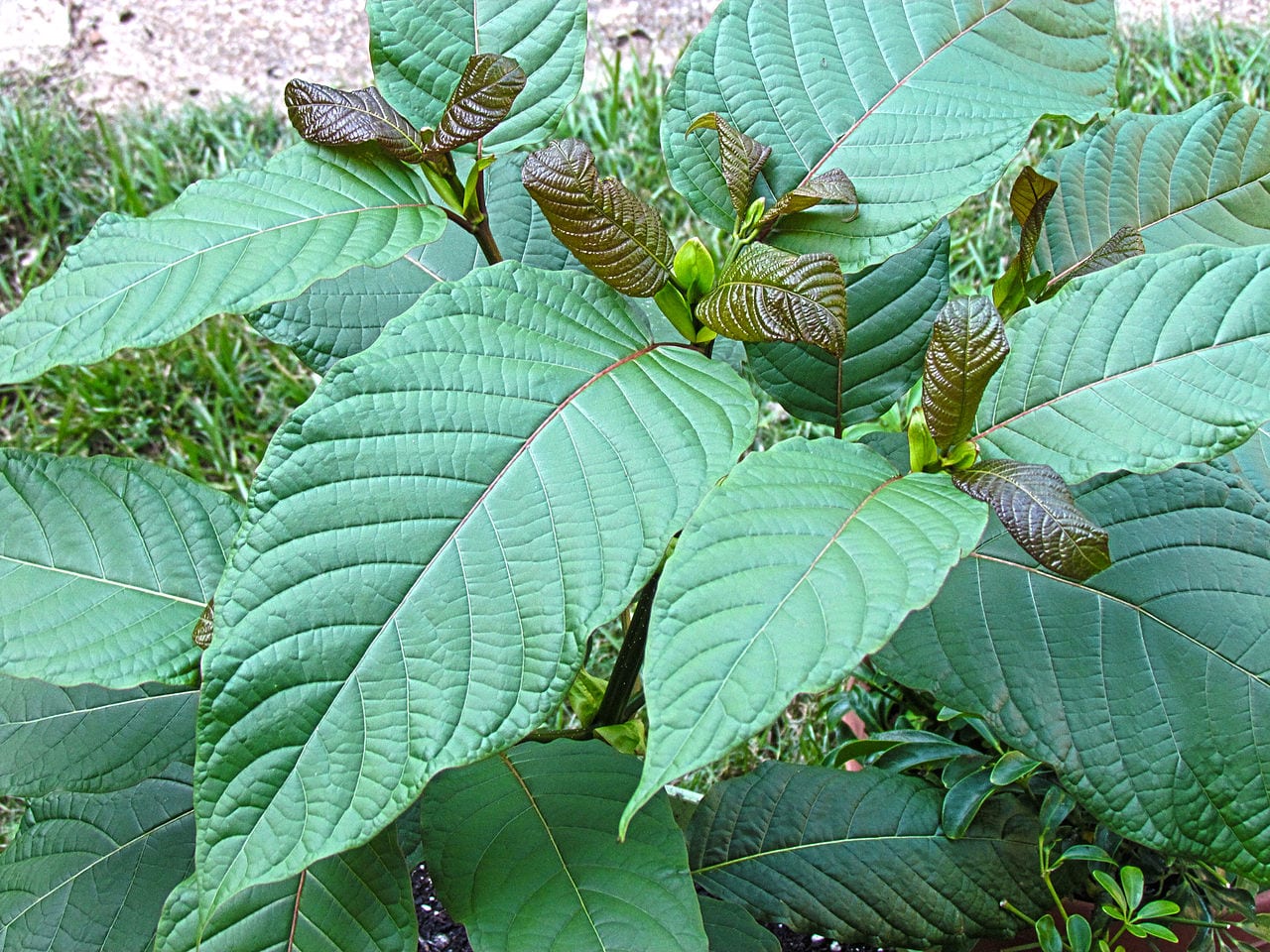 Leaves on a kratom tree. Photo by ThorPorre via Wikimedia Commons

The psychoactive substance in kratom is called mitragynine. According to a 2019 study on the impact of kratom use, it interacts with opioid receptors in the brain that produce sedation, pleasure and pain-killing effects.

While some claim kratom is dangerous and ineffective, research from Johns Hopkins Medicine researchers conclude the psychoactive compound likely has a lower rate of harm than prescription opioids for treating pain, anxiety, depression and addiction.

Harvard Medical School professor Dr. Peter Grinspoon calls into question statistics that suggest kratom is causing deaths, and instead calls for it to be regulated and researched further.

Though it’s in the same plant family as coffee, sale of kratom for human consumption is outlawed in Canada and can lead to criminal charges. It’s categorized by government as a herbal product that poses serious health risks if swallowed or inhaled.

However, kratom is available in Canada online and in storefronts across the country. They sell it as aromatherapy or as other non-consumable products.

“Kratom has benefits but it has risks too. You have to be knowledgeable of what you are taking,” Larsen says, emphasizing that his staff educate new users at the store about proper dosing.

Most of the café’s regulars are experienced kratom users. Some of them use it to stay away from hard drugs. Larsen noticed a need for kratom in the community after former clients of the Urban Shaman — a popular Vancouver source of entheogens — were left without source after it shut down. 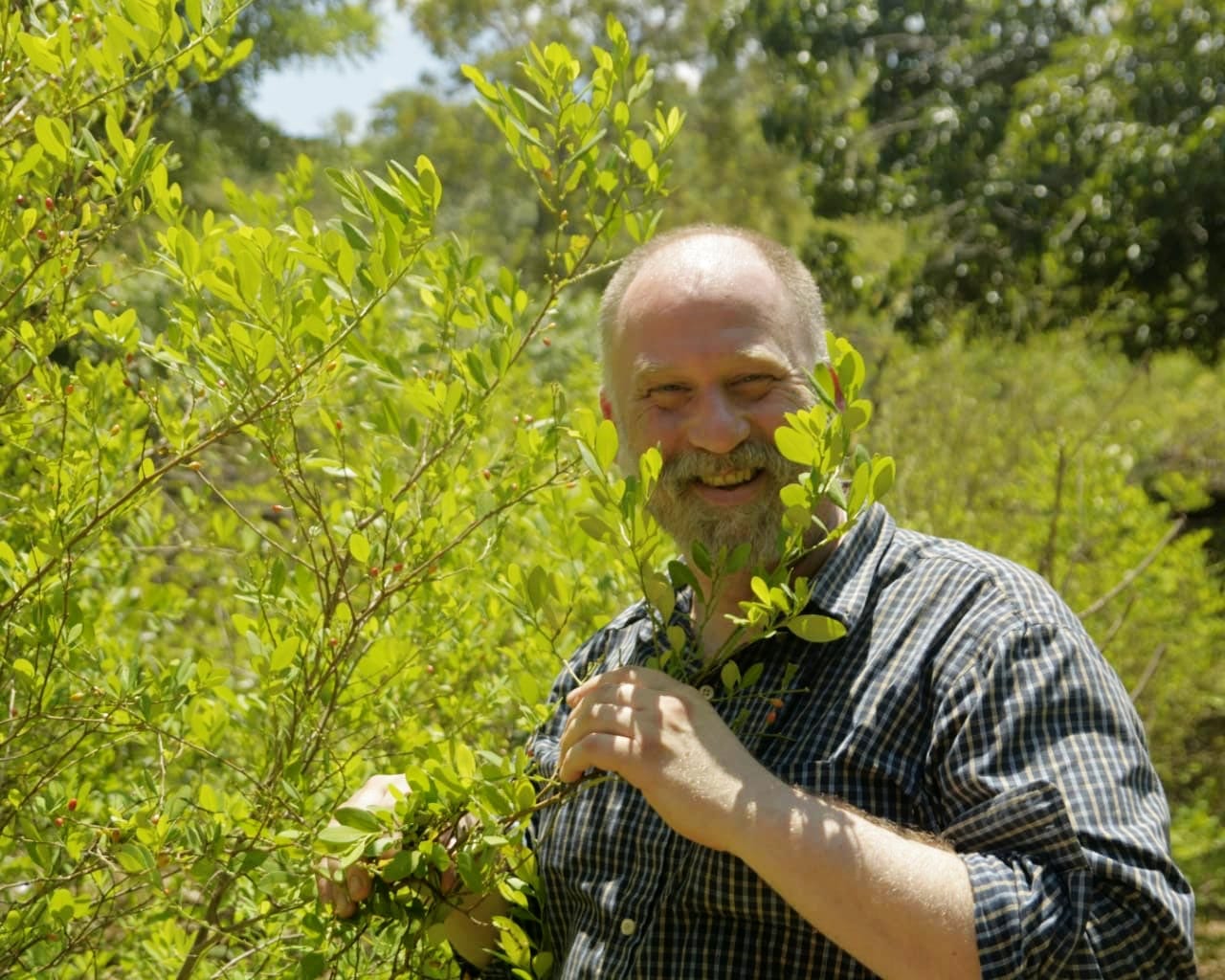 A joyful Larsen poses with a coca plant during a past trip to Bolivia. His shop fills a current gap in Vancouver’s market for people who use, or want more information about, entheogenic plants. Now that cannabis is legal in Canada, a resurgence of promising research means other plant medicines could follow. Submitted photo

“Cutting someone’s kratom supply when the alternative for them would be to start injecting or buying street drugs again — that should not happen,” Larsen continues.

Other stores selling scheduled substances with promising medical properties have opened up in Vancouver in the past year. Zoomers on Granville Street sells dried psilocybin mushrooms, edibles, capsules, elixirs and mushroom drinks.

They offer in-store naturopath and nurse consultations for psilocybin use, but require ID as well as confirmation of diagnosis for depression, cluster headaches, migraines, anxiety or other qualifying health problems.

In 2019, Vancouver city council shut down a motion brought forward by Coun. Melissa de Genova to ban the sale of magic mushrooms. She cited concerns of money laundering, but was criticized for her “anti-drug hysteria” when significant emerging evidence suggests the fungus can be a powerful clinical tool.