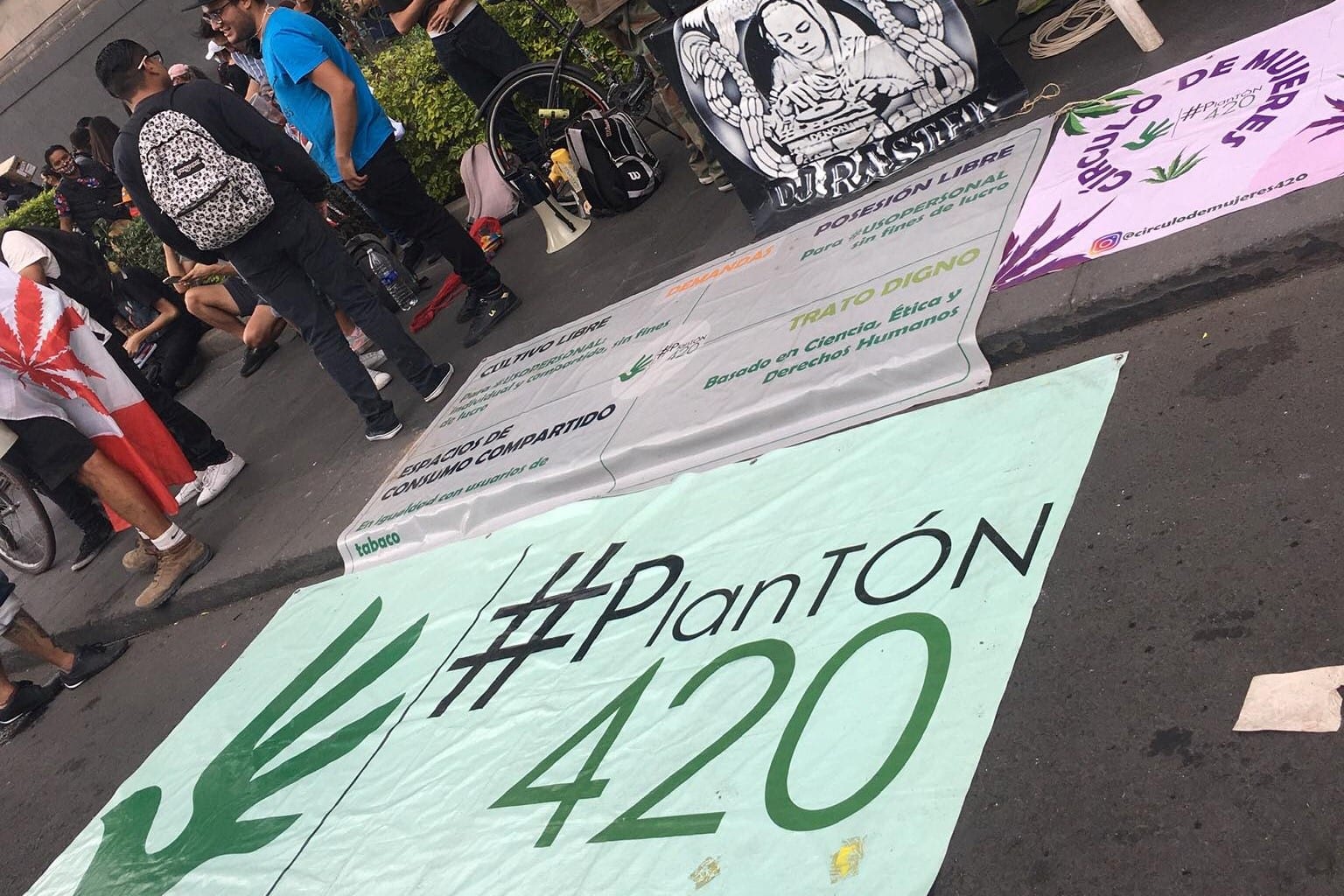 Plantón 420 Bread and Circuses protest on May 1. Photo by Karen Garcia

After three extensions and a missed April 30 deadline to pass the country’s legal weed law, the Mexican Senate says it’s considering additional legislative sessions to discuss the bill while activists demand the Supreme Court declare the delay as unconstitutional.

If a general act of unconstitutionality is declared, the law would be passed and allow people to assert their rights as cannabis consumers. But some anti-crime organizations say such a declaration could place all Mexicans, stoners or not, in a situation of ambiguous legal insecurity.

Depending on how the court proceeds, some activists say a declaration would eliminate criminality related to cannabis while limiting commercialization of the plant.

“This opens the possibility to the best case scenario for the movement,” says Pepe Rivera, leader of activist group Plantón 420. Articles that violate human rights would be removed, the recreational market wouldn’t exist and the conditions laid out by his movement would be met.

Plantón 420 is the largest and oldest marijuana activist group in Mexico. It’s widely known for organizing protests pushing for legal reforms of the plant from its cannabis garden headquarters on the doorstep of the Senate in Mexico City. 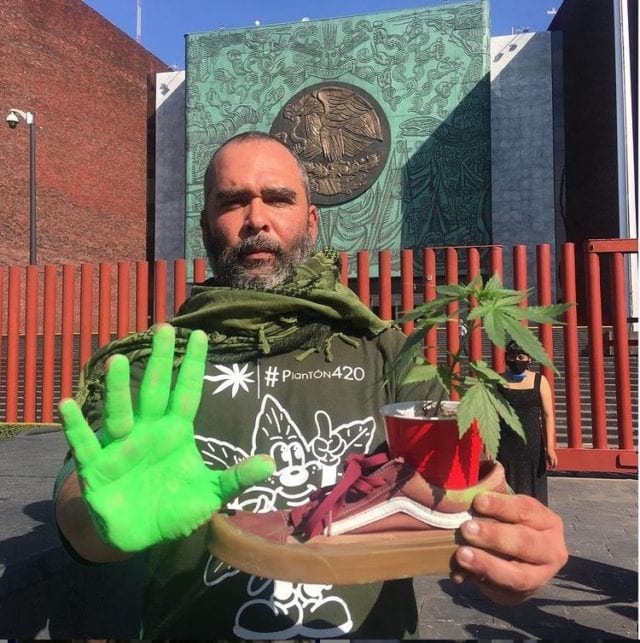 In 2018, the Supreme Court told lawmakers they had a constitutional duty to legalize recreational cannabis after ruling three years earlier that prohibiting people from growing weed for personal and private use was unconstitutional as it violated the human right to free development of one’s personality.

After granting three extensions since then, the court set April 30, 2021, as the deadline to pass the law.

On same day as the deadline, Senator Ricardo Monreal Ávila, president of the Senate’s Political Coordination Board, told media at a press briefing that they may hold extra legislative sessions to revise pending issues, including the marijuana law.

“Marijuana is sold on the corner,” Monreal said laughing, after media asked what will happen with the legislation. Plantón 420 activists called out Monreal’s comment on social media as mocking the cannabis community.

“We have to address the law — it is indispensable. I am convinced that we have to do it and it will be part of the possible extraordinary period,” he said, adding that senators are already working on some modifications to return the bill to the lower chamber.

Mexico Unido Contra la Delincuencia (MUCD), a non-profit organization aiming to reduce violence and crime, said in a statement it laments that even with the extensions Congress wasn’t able to meet the Supreme Court’s order. The organization is calling on lawmakers to take extra time to discuss the bill instead of declaring an act of unconstitutionality.

“This is an extremely serious scenario because it places all Mexicans in a situation of legal insecurity, whether or not they are cannabis users, as there is no regulatory framework that provides certainty about the activities that are legal or illegal within this matter,” reads the release.

The Supreme Court has until May 28 to pass the general declaration of unconstitutionality, according to MUCD.

Last week, Plantón 420 delivered a letter to the Supreme Court demanding it take action and hold Congress accountable for not meeting the deadline.

“For which I request the Supreme Court of Justice of the Nation to issue the corresponding general declaration of unconstitutionality, in accordance with the provisions of the second paragraph of article 232 of the legal protection law,” reads the document signed by Rivera.

“We thank you for your attention to address this situation after this long period of injustice against the cannabis community.”

Rivera says that if the declaration is approved, the court will likely limit some aspects of the current law, to protect informal trade in the absence of a legal market.

He said there’s also the risk that the Supreme Court doesn’t make the declaration “because eight ministers still have to vote. In that case, the incentive to legislate the law would end.”

“So, we are still waiting for it. We delivered the letters to the Supreme Court so that they take action,” says Rivera, adding that he doesn’t know how long it will take to process.

After most of the Senate’s commissions approved the bill late March, Senate president Eduardo Ramirez Aguilar announced early April senators were applying for another extension. But that application never came to be.

On May 1, one day after the deadline, pro-cannabis protestors led a Bread and Circuses march where demonstrators wore marijuana leaves, clown suits and other cannabis-inspired attire. They walked to the Supreme Court asking judges to pass the law and the declaration of unconstitutionality. 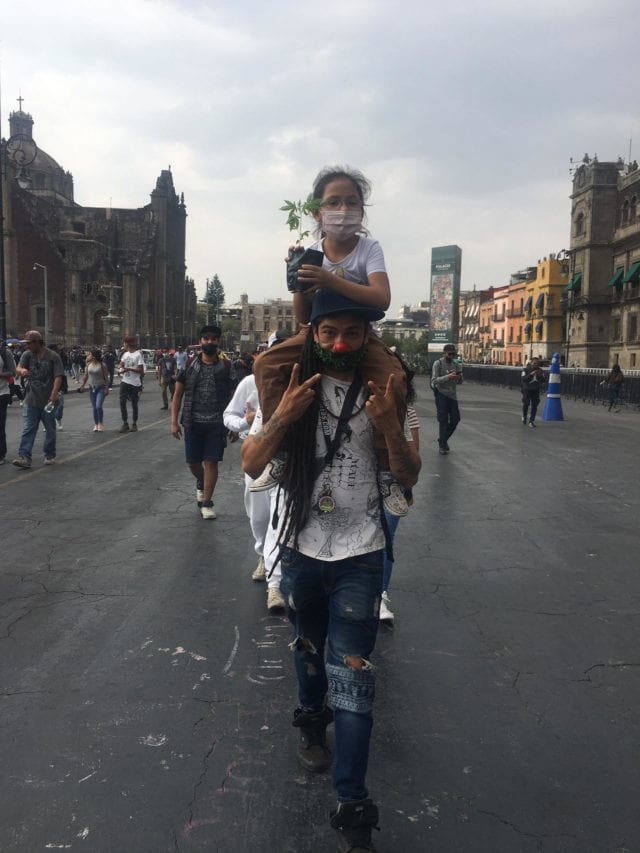 A protestor wears a clown nose with his daughter holding a weed plant at the Bread and Circuses Plantón 420 protest on May 1. Photo by Karen Garcia