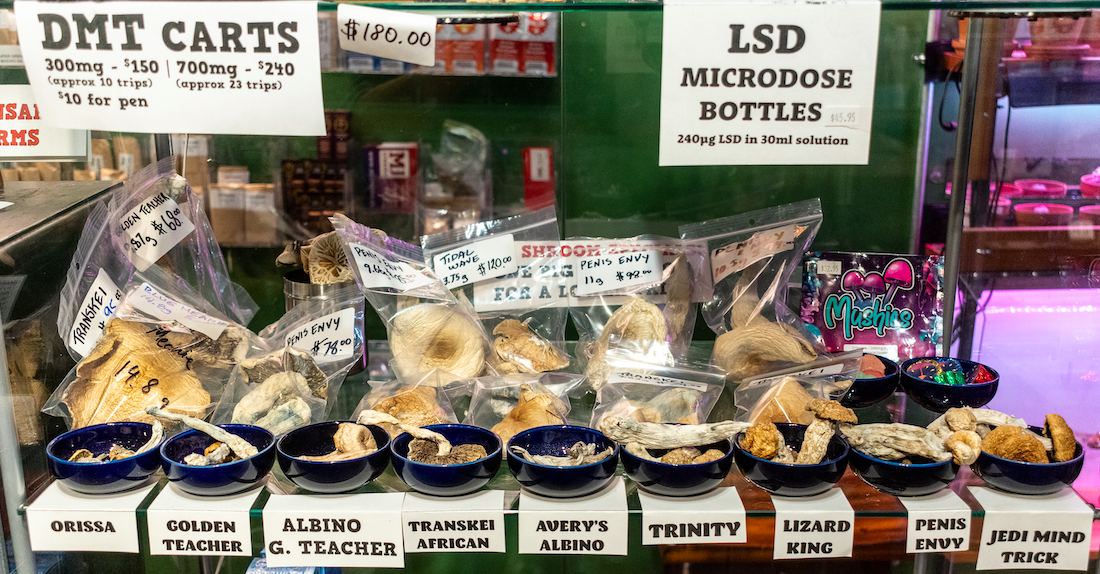 An assortment of stores in Vancouver continue to openly sell certain substances and plants in a manner that might land you in jail if you were in many other parts of the world.

Psilocybin mushrooms are generally the main retail item in these new dispensaries, but one is even carrying more powerful psychoactive compounds like LSD or DMT.

That store also has peyote, a psychoactive cactus known to be valued by Indigenous cultures for its consciousness-altering properties and spiritual significance.

Peyote cacti at the Medicinal Mushroom Dispensary, E Hastings St, Vancouver, B.C. “We get our peyote cacti mainly from a Canadian grower who starts them from seed,” said Dana Larsen, store owner. Photo by Rowan Dunne.

In a statement from Dana Larsen, owner of the Medicinal Mushroom Dispensary and Coca Leaf Cafe on East Hastings Street, he explained how it was possible for his store to function without being shut down or having any serious legal troubles.

Larsen’s shop openly sells an assortment of psychedelic substances and plants along with coca leaf products derived from a plant known for its role in producing cocaine. 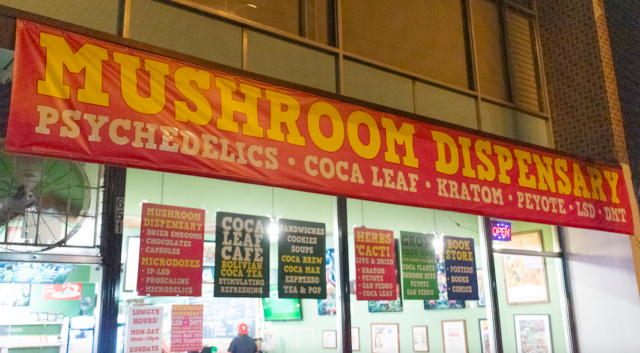 “Well, there are some legal challenges in regards to the city when it comes to licensing and permits. We are currently engaged in some court proceedings around these issues, but it is a slow process and we are in no hurry to resolve them,” said Larsen.

“However, when it comes to police raids, while there is no guarantee that we will not face police action, the Vancouver Police Department (VPD) have generally made it clear they do not wish to go after stores like ours,” he continued.

Larsen added that the local authorities have been refraining from raiding his and other dispensaries because it is expensive, time-consuming and ineffective. He expects their reasoning for leaving these stores alone is the same now as it was when unlicensed cannabis dispensaries were emerging in the city pre-legalization. 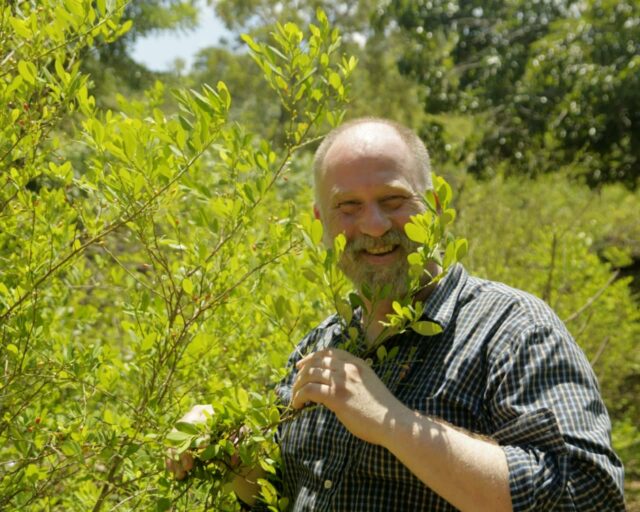 “In 5 years I hope there are hundreds of shops like ours opened across Canada, providing safe and affordable access so more Canadians can enjoy the benefits of psychedelic therapies.” Dana Larsen with coca plant in Bolivia. Photo via Coca Leaf Cafe.

When asked whether he believed legalization was on the horizon in the near future and how it would impact his dispensary he offered his thoughts.

“I don’t think legalization of mushrooms and other psychedelics in a manner similar to cannabis will happen within the next five years, and probably will take much longer than that. I do expect we will see increased legal access to these kinds of substances for medicinal and therapeutic purposes however,” said Larsen.

Larsen also said that he would be happy to see an increasing number of legal and licensed shops offering the same goods, even if it meant his store became unneeded. He wants to help pave the way for others and isn’t concerned with dominating the market in any way. 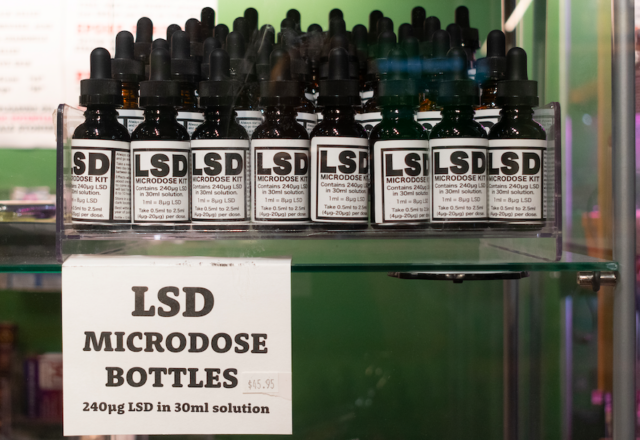 “I hope to have more locations opened in 2023, and I expect others will also be opening similar shops in Vancouver and across Canada,” said Larsen. LSD (acid) for sale. Photo by Rowan Dunne

Lastly, Larsen shared what made him proud about owning his store.

“I am proud that we are leading the movement to end prohibition of psilocybe mushrooms and other beneficial psychedelics and plant medicines. There is no other place in the world where adults can walk in and purchase psilocybe products, LSD, kratom, peyote, coca leaf and more. Our store is absolutely unique.”

According to the Controlled Drugs and Substances Act (CDSA), activities involving magic mushrooms or psilocybin and psilocin-derived products such as sale, possession and production are illegal unless authorized by Health Canada or provided through the Special Access Program (SAP) by the government.

LSD and DMT are also considered to be class III substances and are illegal to possess unless authorized by the government for medical, scientific or industrial purposes.

Lastly, possessing the peyote cactus is actually legal in Canada but its active ingredient or psychoactive derivative mescaline is considered a schedule III substance as well.

Zoomers Dispensary on Granville Street in Vancouver’s downtown core is another relatively new psilocybin mushroom retail outlet, and the shop has now been operating freely there for approximately two years.

“We operate in a grey area and sell for medical use to our members who use psilocybin products to help with various issues,” said Noah, a store manager at Zoomers.

Mugglehead also inquired about what made the dispensary operators most proud about their management of the location.

“We’re so proud when we hear of members who have stopped getting cluster headaches, members who are near end of life and have found peace and a sense of well-being after using our products.  A number of members have also abstained from using hard drugs while using micro dosing to help with their addiction. These are the kind of stories that excite us and make us proud to be helping our communities,” said Noah.

The Fungi Shop on Seymour Street is one other good example of a new mushroom dispensary operating in the city. 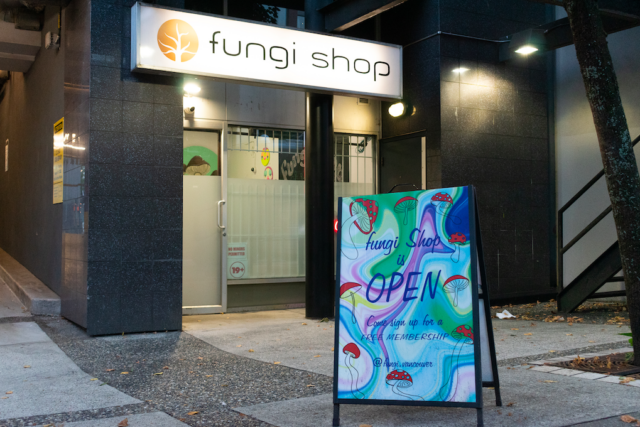 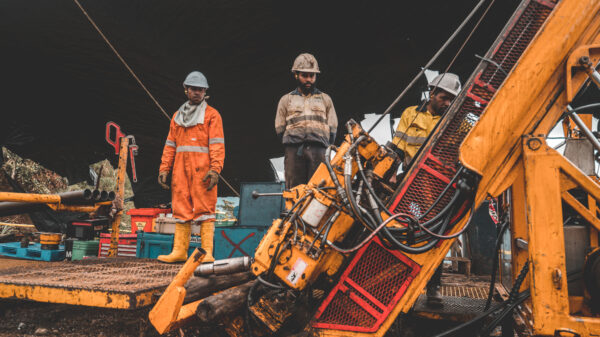