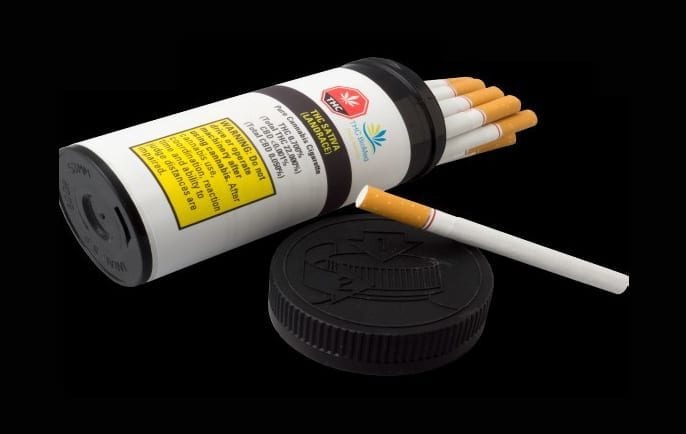 Tailor-made marijuana cigarettes are coming to Canada. THC Biomed Intl Ltd. (CSE:THC) announced Tuesday it will be offering Canadian cannabis users automated and pre-rolled cigarettes that are made with 100 per cent marijuana. The first-of-its-kind cigarette product in the industry will contain zero tobacco, despite the product resembling a conventional cigarette.

The Vancouver-based pot company believes its new product will be a popular choice with consumers based on the increased demand its seen for pre-rolled joints:

“We promise our Pure Cannabis Cigarettes will offer the same potency as our regular best-selling pre-rolls. I am predicting consumers will gravitate towards this finished type of product and the old way of rolling joints will be something of the past,”

THC Biomed can produce the cigarettes at high speeds with its pre-rolling system, which could add efficiency to the industry. In its Acland Road plant in Kelowna, the company says it can produce up to 5,000 cigarettes per minute.

And THC Biomed said it expects there will be enough demand to require such mass production, but investors will have to wait to see. The company believes its technology will help it achieve profits in the long term, but it preaches patience to its shareholders for the short term.

Is the company targeting tobacco users?

THC Biomed plans to offer its cannabis cigarettes in pack of three or 20. The marijuana pre-rolls will come in four different strains, with three focusing on THC, while a fourth containing a high CBD content.

And the company’s CEO suggests the latter could be an alternative for tobacco users:

“We also expect our CBD line of Pure Cannabis Cigarettes to be very popular, as we expect regular cigarette users will find it easier to transition to our CBD product, which we think is better than smoking tobacco,” Miller said.

If it can win over tobacco smokers and promote a healthier CBD product, it could create opportunity for THC Biomed. And if the cannabis cigarettes start selling, they could get the attention of big tobacco companies as a potential substitute for their products. But until sales figures come in to support that, its all just speculation for now.

One company that might keep THC Biomed on its radar is Altria Group Inc. (NYSE:MO), which already has a stake in the cannabis industry through its investment in Cronos Group Inc. (NASDAQ:CRON)(TSX:CRON). The tobacco giant Altria has billions of cash on its books and could surely swallow up THC Biomed with its small market cap of approximately $35 million.

THC Biomed could be attractive for other cannabis companies

But if there’s no interest from big tobacco, the possibility remains for THC Biomed to be acquired by a big cannabis producer in North America. With profits hard to come by for the industry and many companies bleeding cash, an innovative technology like this could add sales and potentially improve margins as well.

However, because TCH Biomed is still a young company and is generating minimal revenues so far, its stock’s main appeal may be its technology. And investors will have to wait to see how much demand its products will generate, which may depend on whether tobacco smokers consider it a viable substitute.