The 'Flavoured Vape Cartridges' section on the Ontario Cannabis store includes 'Forbidden Fruit' and 'Hops and Spice' options, which could be disallowed if the amendment goes into effect. Screenshot by Nick Laba

Members of the Canadian cannabis industry took to social media Friday to express their distaste over a proposed amendment that would ban flavoured vape products.

To reverse the rising trend of youth vaping, Health Canada is suggesting the removal of flavours in all inhaled cannabis extracts so they seem less appealing.

Health Canada aims to “discourage youth and young adult uptake” by restricting the production, sale, promotion, packaging or labelling of inhaled cannabis extracts from having a flavour.

The agency states despite current restrictions, the availability of flavours led to an increase in cannabis vaping among the 18–24 age group. It also uses data from the 2020 Canadian Cannabis Survey and the 2019 Canadian Student, Tobacco, Alcohol and Drugs Survey. 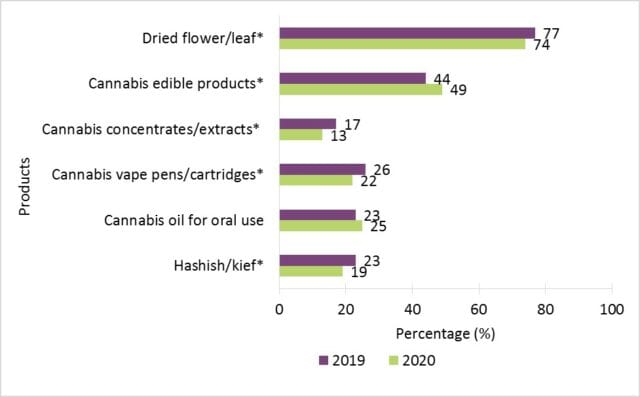 Cannabis products used among people who consumed it in past 12 months, 2019 to 2020. Chart via 2020 Canadian Cannabis Survey

But industry experts criticize the data for being outdated, and call out  Health Canada for drawing false equivalencies between nicotine and cannabis products, as well as insufficient industry consultation.

Amendments would apply to extracts sold for medical and non-medical reasons.

However, there are concerns stemming from the consultation the federal agency cites in its proposal, as well as the repercussions of banning flavours in the legal market.

If an additive makes cannabis products taste like something other than weed — like a dessert, or an energy drink — then it likely wouldn’t be allowed under the health agency’s proposed changes.

There are some exceptions laid out by Health Canada. “Factual flavour description” and cultivar names, like Pink Kush, would be allowed, as would flavour notes like “piney,” “diesel” or “skunk.” Factual statements about terpene content of extracts are okay too.

But this could mean quite a few products on the shelves right now would be banned if the proposal comes to fruition.

A “big win for the black market” is one of the arguments Shane Morris, CEO of Morris and Associates Consulting, has against the amendments. He details some of his concerns in a thread on Twitter.

Morris followed up with Mugglehead by phone to elaborate on the downsides of the proposed banning of flavours.

“There’s a high number — it’s well over 20 per cent, I would argue — of non-cannabis flavours,” he estimates, noting cultivars like Lemon Berry and Tropic Thunder. “I would argue a lot of these are potentially impacted by these regulations.

“[Flavours] are very popular. They’re popular in the black market. And if your key policy target is to move away from the black market, this isn’t going to help that policy.”

Health Canada’s proposals would be in alignment with amendments to the Tobacco and Vaping Products Act and proposed regulations for vaping products, “which would mitigate the risk of young adults starting to use flavoured inhaled cannabis extracts once flavoured vaping products are no longer available.”

However, comparing cannabis vapes to nicotine vapes is flawed, Morris argues, because the exposure to youth isn’t the same.

Solei’s Balance cartridges are described as having ‘a bright, citrus flavour with notes of lemon and grapefruit, and virtually no cannabis after-taste or smell,’ and would almost certainly be banned under the amended regulations. Screenshot via the Ontario Cannabis Store

“These regulations seem to miss the fact that cannabis vapes have very little exposure to youth because of the way they’re sold. It’s not sold in gas stations. It’s not sold over the counter at non-cannabis locations. You’re basically minimizing consumer choice based on a fear that is limited or already mitigated.”

Health Canada asserts there’s a “range of benefits” to the proposal like mitigating negative health impacts, but those benefits were “unable to be monetized at this time due to data limitations.”

Morris also takes issue with the lack of industry consulting by Health Canada before coming out with new amendments.

Morris points out Health Canada didn’t issue a notice of intent, which it has done recently for cannabis regulations and research, to allow for feedback before drafting regulations.

“They were clearly able to do that for that initiative. But in this initiative [for banning flavours], they haven’t bothered to do that. My concern is that you have a multi-millionaire-dollar industry that could potentially be impacted by regulation amendments, which they (Health Canada) haven’t even bothered to engage with the industry.”

6/9 Basically, HC is relying on one small non-peer reviewed “online” cannabis vape specific study that has lots of weaknesses. References to flavoured nicotine vaping studies are misleading as cannabis vapes are extremely limited to youth compared to nicotine vapes.

Health Canada reports nearly 6,800 responses to an online questionnaire and 350 written submissions in the reports, but also notes “Very little feedback was received on flavoured inhaled cannabis extracts as part of this consultation.”

That consultation ended in 2019.

5/9 Costs to Licence holder “it is not possible to quantify these activities for affected licensed processors at this time.” Because HC didn’t bother to ask them yet.

“This was before [cannabis] vape pens were on the market,” he says, calling the move to only reference this data “highly disingenuous.”

Public consultation on restricting flavours in inhaled cannabis products opened the same day the proposal was released and goes until Sept. 2.

The proposed amendments are expected to be registered by 2022, and the proposal would come into effect 180 days after the day they are registered.

Quebec, Newfoundland and Labrador, Prince Edward Island, and Nova Scotia have all either banned or restricted cannabis vaping products.