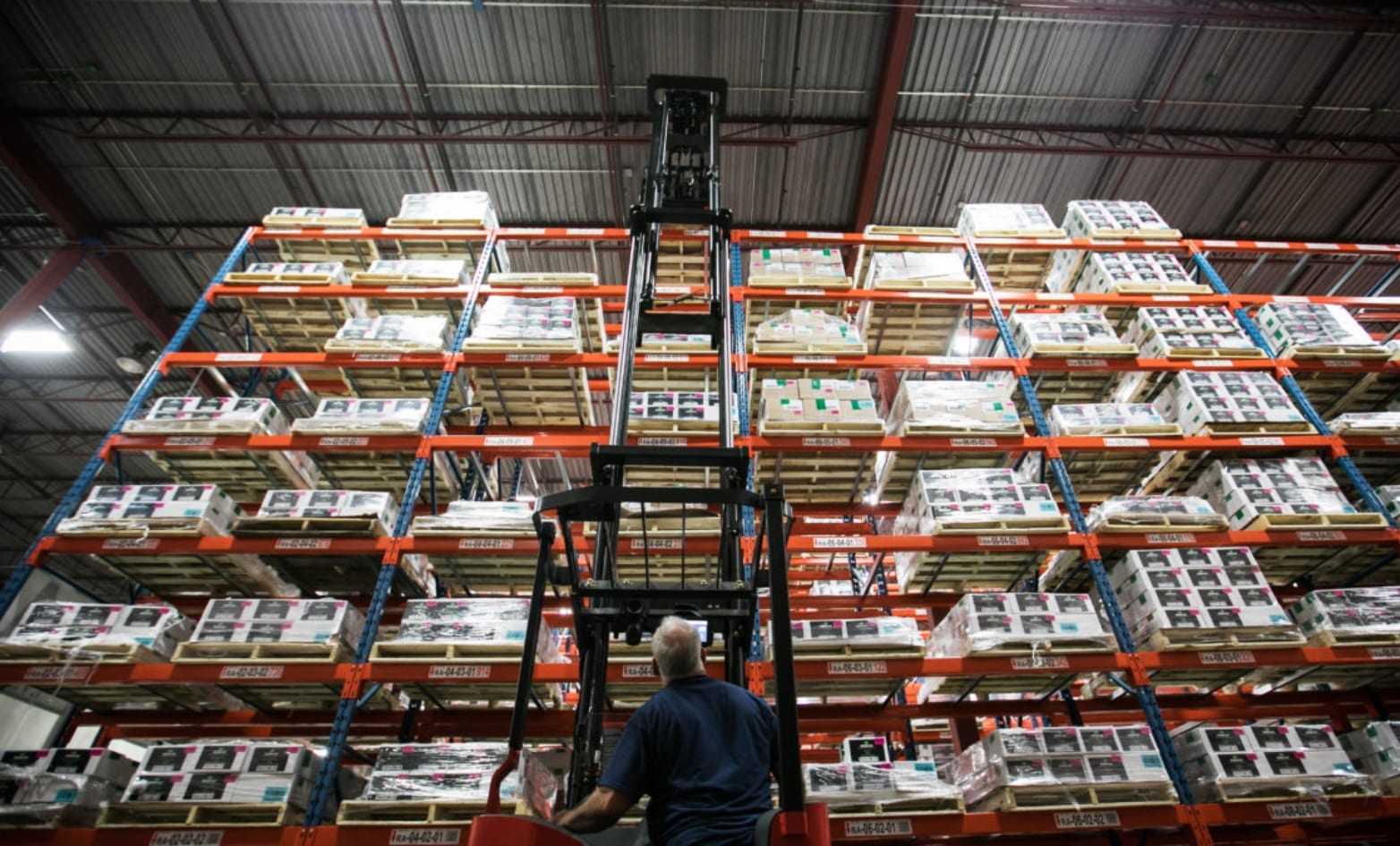 The average distance to a pot shop decreased by 3 kilometres over the fiscal year, according to the OCS

Ontario’s wholesaler and sole online seller of legal weed has posted the results for its second fiscal year, detailing the provincial entity’s significant growth and a number of retail data points.

On Monday, the Ontario Cannabis Store posted its annual review for the fiscal year ended March 31, with a wealth of information not seen from other provinces.

After an initial snail’s-pace rollout of stores, the province shed its lottery system at the end of 2019 and has sped up approvals several times since. Ontario had 42 private storefronts in December 2019, and had 572 by the end of the reporting period.

“Most central to the growth of the Ontario cannabis marketplace in 2020-21 has been the rapid expansion of our retail store network,” interim president and CEO David Lobo says in the report.

As a result, the province’s share of national sales has climbed to 29 from 25 per cent. While speculation swirls on retail saturation in some areas, the fact that Ontario’s 14.6 million people make up almost 39 per cent of Canada’s population suggests there’s still room to grow.

Due to the increase in stores, the OCS says it now captures 44.1 per cent of provincial sales, up from just 19 per cent a year ago. A majority of sales are still from illicit sources.

With the rollout of cannabis 2.0 goods at the beginning of 2020, the product landscape has shifted dramatically. At the end of last fiscal year, dried flower made up 73 per cent of sales. Now, dried flower still has a commanding lead at 59 per cent. 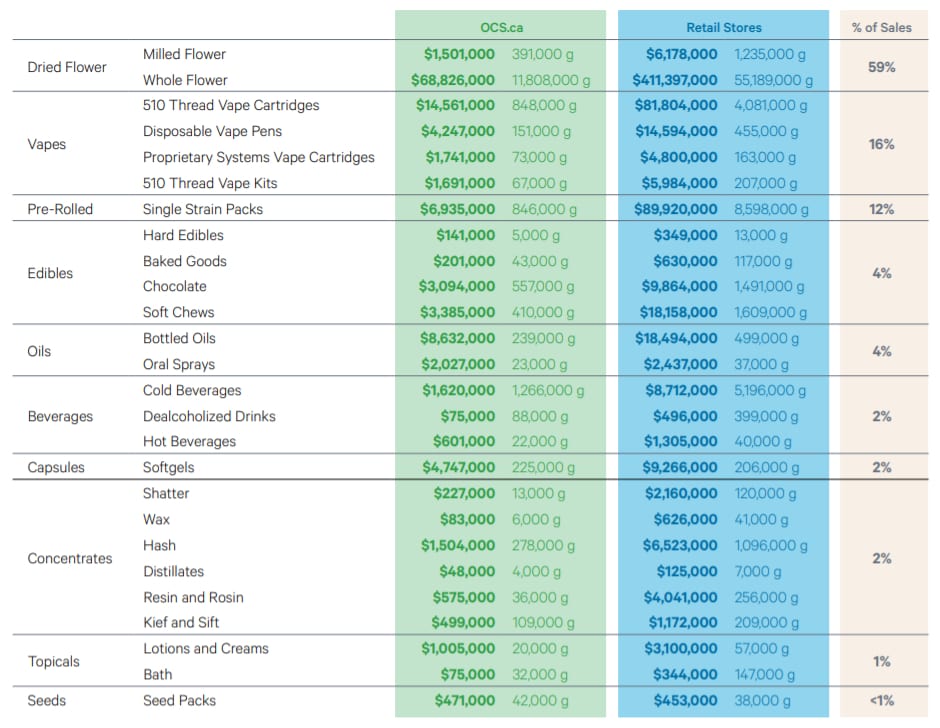 Percentage of sales by product category. Chart via OCS

Overall flower sales have increased almost 78 per cent to $487.9 million.

Pre-rolls have a 12-per-cent share of sales, and edibles have just 4 per cent.

One of the most striking charts in the report shows just how important high-THC products are to Canadian consumers.

“Our best-selling products are cannabis flower that is the best perceived value (by price or quantity) for the highest THC they can get in their budget,” says Jennawae McLean, whose privately owned store Calyx + Trichomes Cannabis racked up the most sales in the “East” region.

“Overall we are going to see the price of 20-per-cent-plus flower going down. People care less about brand or even strain and more about whether they feel they’re getting the best value for their money,” she tells Mugglehead. “Over 70 per cent of our flower sales are for items that are 20-per-cent plus, exclusively.”

Among OCS.ca customers, “quality” (85 per cent of returning consumers) was rated the most important product attribute, followed by “potency” (76 per cent) and “price” (72 per cent). 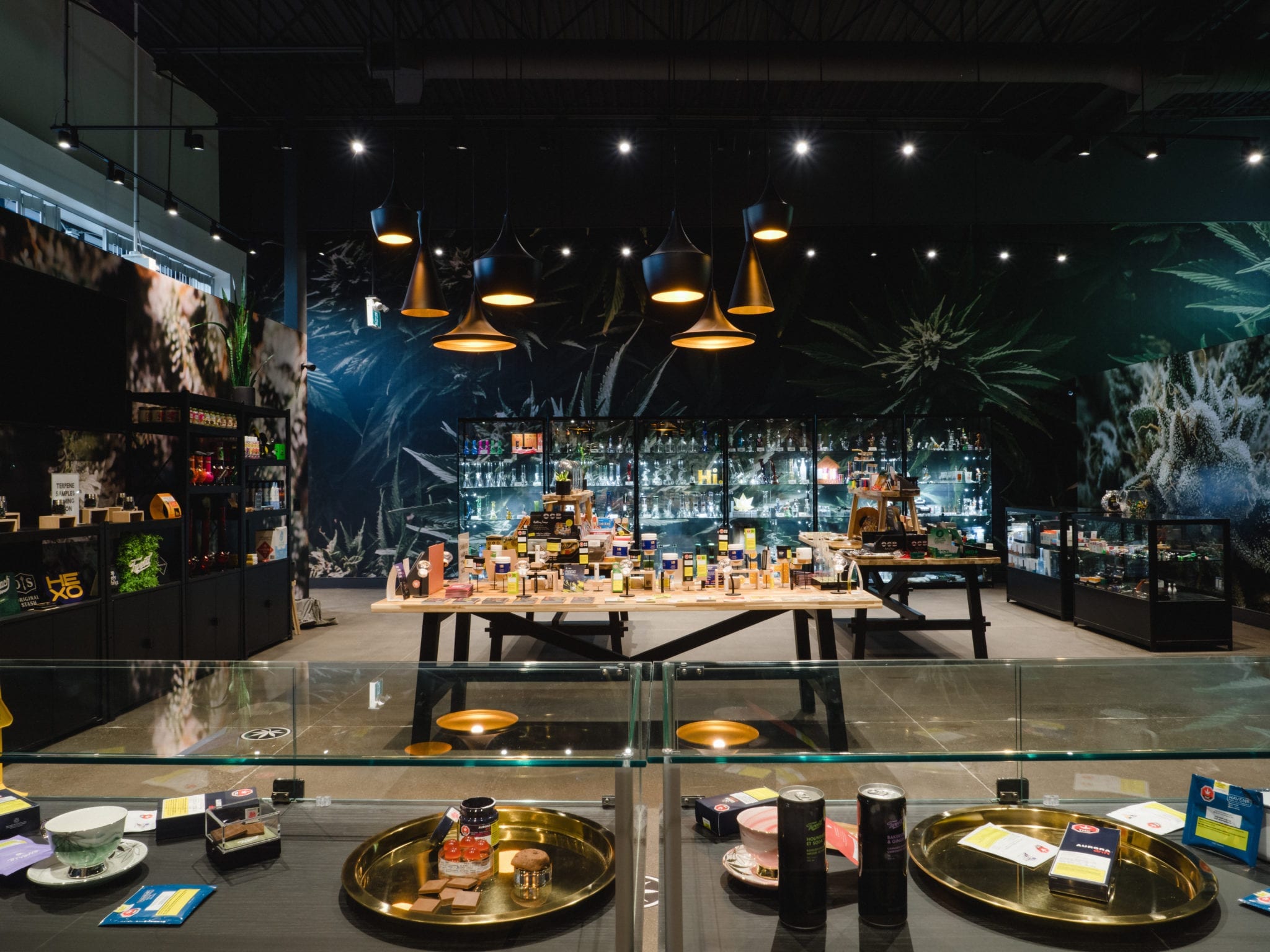 ‘At this point 20 per cent is even considered low for some people who are spoiled by choice,’ says Calyx + Trichomes co-owner Jennawae McLean. Submitted photo

The Ontario “half quarter” 3.5-gram flower format is still the most popular at 66 per cent in stores, but has waned from 73 per cent at the beginning of the fiscal year. The 7-gram format has grown the most, to 12 from 7 per cent, while single-gram offerings have slid the most to 10 from 17 per cent.

Gummies have come to dominate the edibles category — rising to 54 per cent from 28 in stores — overtaking chocolate, which melted to 19 from 46 per cent. 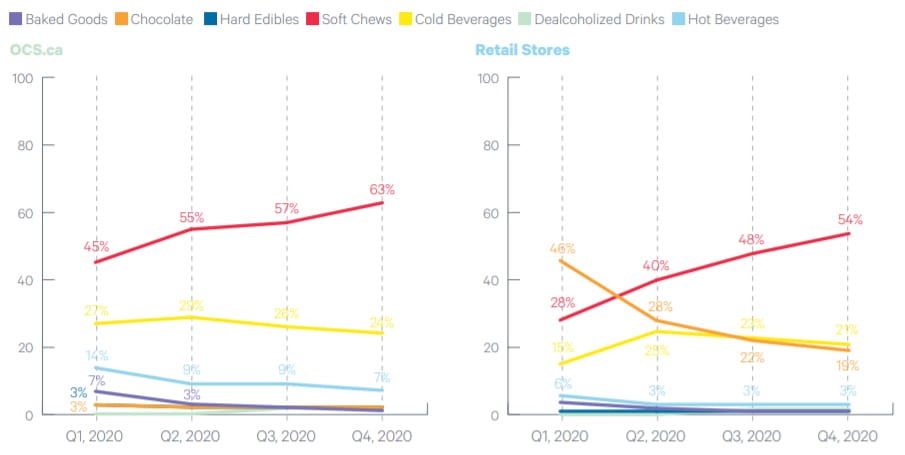 With more SKUs hitting the market, gummies have risen sharply in popularity, taking a bite out of chocolate sales. Chart via OCS

Average prices for dried flower have dropped 10 per cent to $8.87 per gram in stores, and almost 13 per cent to $6.17 at OCS.ca. Surprisingly, the OCS reports illicit market prices have jumped 20 per cent to $9.59 per gram.

“To calculate illegal market pricing, OCS sources data from [mail-order marijuana] (MOM) sites, and continuously looks for new sites to add to this search to ensure more accurate numbers,” senior communications director Daffyd Roderick said in an email. “The increase in the average price of illegal market dried flower is due to a number of factors, including fewer value offerings on MOM sites with an increased focus on premium flower, and a smaller sample size of products as illegal sites are shutting down rapidly.”

“We are currently reviewing different approaches for future publications,” he said. 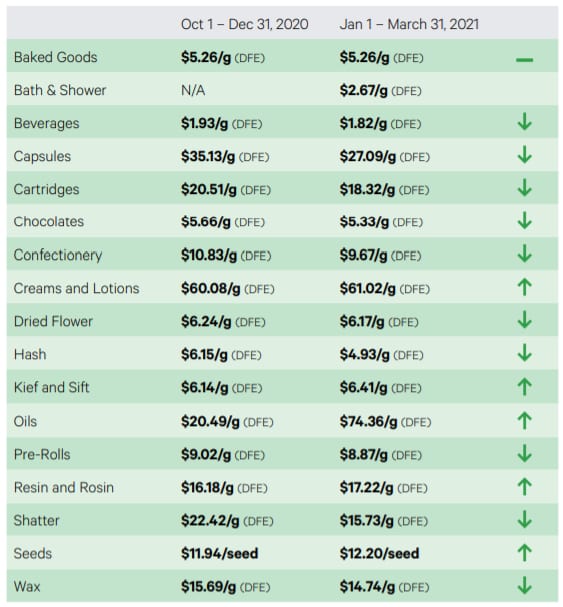 Prices for most product categories decreased over the fiscal year. Chart via OCS

Prices for many extract products have dropped as well. The cost of shatter per dried-flower gram equivalent fell 22 per cent to $15.73, and oil capsules dropped 23 per cent to $27.09.

Roderick says he expects prices for new product categories to decrease as the market matures.

Access to stores has improved significantly over the year, with store count jumping from 110 to 572. Average distance to a retail storefront has shrunk to 6.5 kilometres from 19 kilometres.

Tokyo Smoke leads the province in number of locations with 27, followed by Fire & Flower (26), Sessions Cannabis (25) and Spiritleaf (25).

“I see our number-one status as a win for independents overall,” she says. “We did this with our own vision, our own drive and our own investment.”