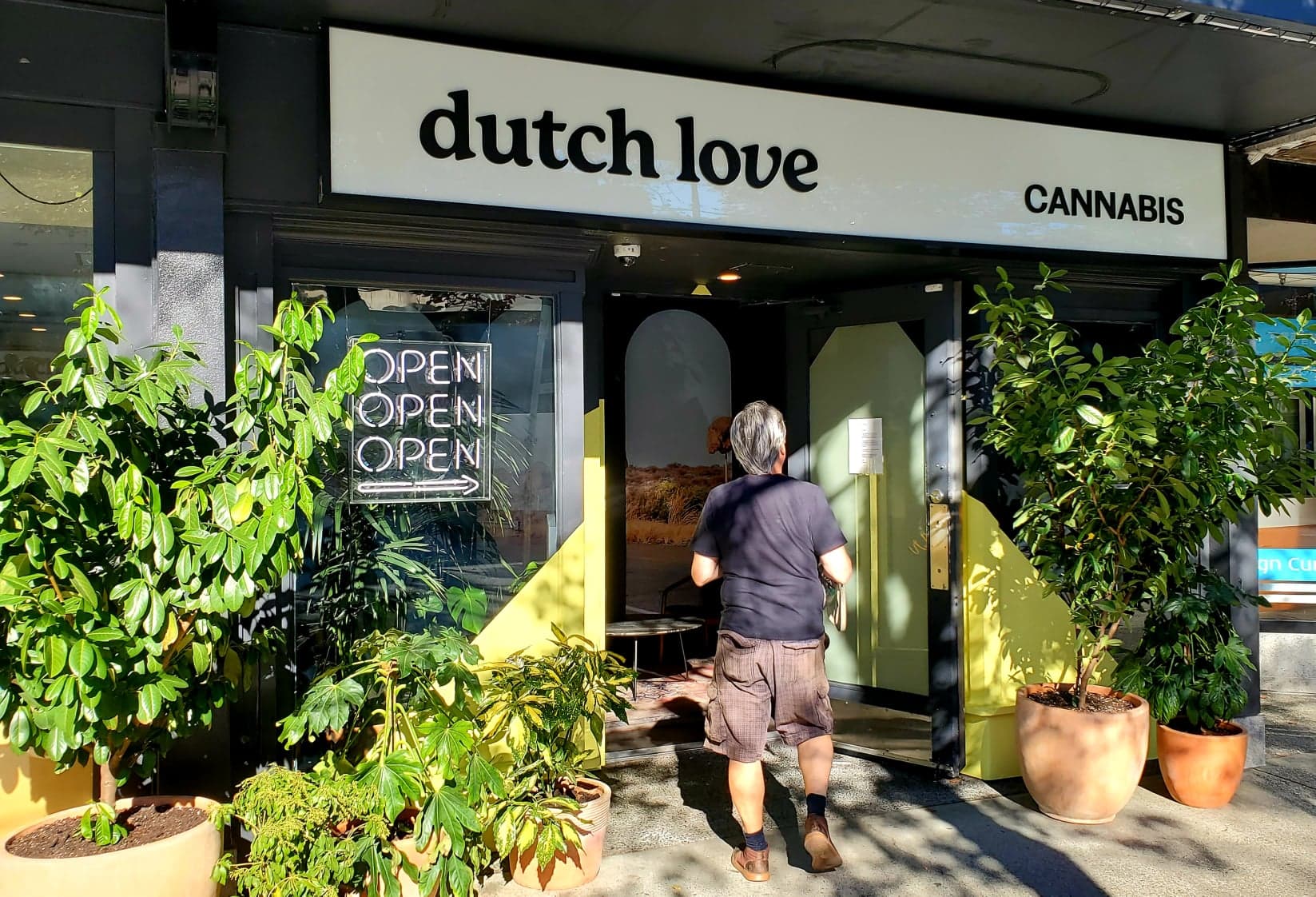 Legal cannabis spending in Canada hasn’t eclipsed the country’s still-thriving illicit market, which likely commands about two-thirds of total spending in the country.

That’s according to Nick Pateras, an industry veteran who questions recent official figures suggesting regulated weed sales in the second quarter of 2020 outpaced the illicit market for the first time.

In late August, Statistics Canada said that household spending on recreational weed hit $648 million in the quarter and medical cannabis spending reached $155 million. Meanwhile, illicit spending fell to a new low of $784 million. Therefore, the federal agency is saying that the entire legal market now accounts for 50.5 per cent of all weed purchases in Canada. The reported milestone went on to draw splashy headlines and praise from industry watchers.

Not only do these numbers run contrary to projections from prominent analysts, which base their modelling on a variety of sources, but StatsCan’s numbers are limited to self-reported surveys that rely on individuals to honestly report illicit activity. Additionally, its national survey has been on hold in recent months, so its most recent figures are historical guesstimates.

Pateras has reason to be skeptical.

“For legal sales to have already eclipsed illicit sales that would make Canada the fastest to convert from illicit sales to licensed sales of any jurisdiction in the world,” he said in a phone interview. “In any other state, like Uruguay, it’s never been done that fast before. So that’s why I think it is an eyebrow-raising headline.”

If legal sales are already 46% of the overall market in Canada (highly doubtful), then the market's size is ridiculously smaller than what everyone's models call for.

Be distrustful of dodgy data. https://t.co/YnLO5OR6HF

“Most of the illicit market is sized through surveys by the agency,” he says. “So basically what you’re asking Canadians to do is admit to illicit behavior as invited through unlicensed channels — so that’s obviously going to be understated.”

Pateras cites reports from major banks — including Cowen, Raymond James and Bank of America — as more reliable sources to estimate the Canadian market. That’s because the institutions extrapolate data from multiple sources, both internally as well as from governments, research companies and industry reports.

According to the three big banks, the potential value for Canada’s total addressable market for weed ranges from $6.5 billion–10.8 billion. StatsCan’s data puts the total market size at a meager $2.4 billion.

“If you look at what they estimate the total size of the market to be, it’s several billion dollars larger then what the annual run rate will be based on StatsCan’s latest data,” he said. “So, it’s something that doesn’t quite add up. Either the market is going to grow beyond that of the size it is today by a sizable portion, or [StatsCan’s] figures are understated. I’m going to guess it’s the latter.” 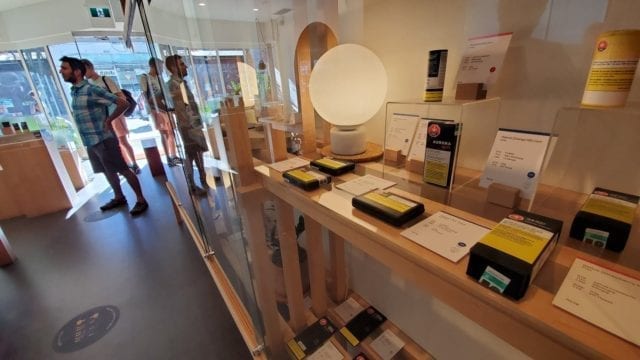 Consumers line up at a cannabis store in downtown Vancouver, B.C. Photo by Jared Gnam

Pateras admits there’s no single source of truth in figuring out how much Canadians actually spend on cannabis, but his own educated guess falls somewhere around $8 billion annually. That would mean the legal industry now accounts for just over one-third of all spending, based on StatsCan’s data.

And there’s still room to grow. Reports show Canadian consumption is going up during the pandemic, including from more first-time consumers.

A recent Deloitte survey found 29 per cent of Canadian cannabis users are consuming more than before, while 16 per cent say they’re turning to weed for the first time to help cope with Covid-19 stressors.

StatsCan confirmed with Mugglehead that it uses its National Cannabis Survey (NCS) as the indicator for total Canadian household spending. The agency says it also uses its own monthly retail sales data to calculate legal recreational spending, and Health Canada data to estimate medical spending.

According to StatsCan’s website, the NCS is typically conducted online or by phone each fiscal quarter to 12,000 households to gather a cross-sectional sample of the 10 provinces. The sampling error of the survey is a reported 2.5–6 per cent. But its response rate is quite low — about 47 per cent in the fourth quarter of 2019. For Pateras, those factors are why the estimates are dodgy at best.

In a highly publicized report last year, business accelerator Grow Tech Labs estimated the unregulated economy to be in excess of $10 billion based on the number of personal and designated medical production licences, a large percentage of which have historically been used to sell cannabis illicitly. 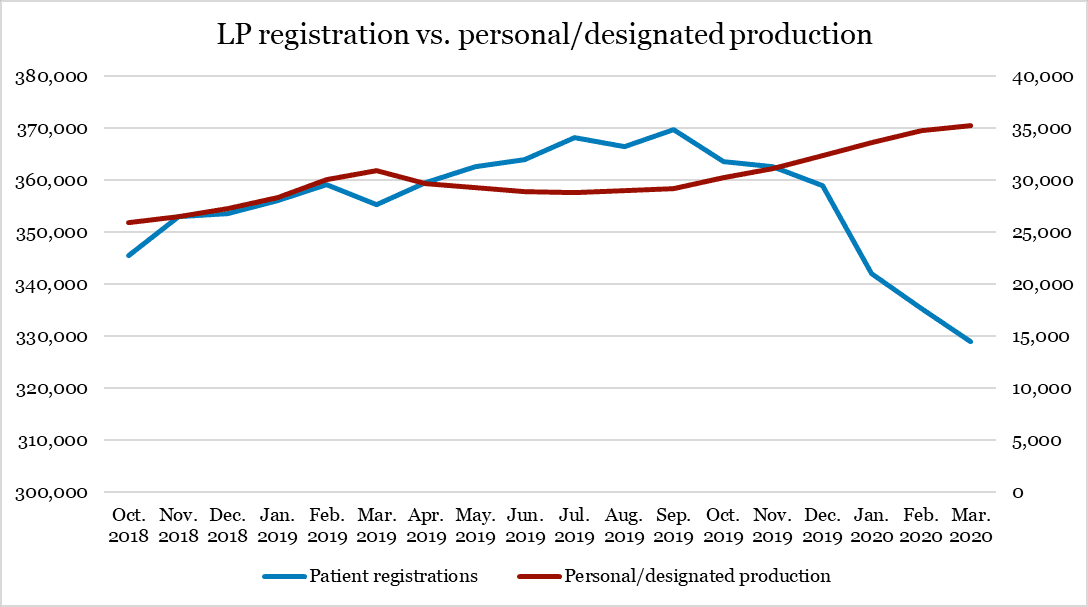 Health Canada data charting the number of patients registered with licensed producers versus those registered to produce medical cannabis for themselves or designated by a patient to grow for them. Data visualization by Mugglehead

“If we saw even 15 per cent of those growers enter the legal market as micro-cultivators we would be looking at an economic contribution of $6 billion dollars,” senior project manager Natasha Kumari said in an email.

Since legalization in Oct. 2018, the number of these licences has risen to 35,227 as of March 2020, an increase of almost 10,000 — according to Health Canada data. Taking into account how many of these licences have been used in the past provides more reason to doubt that regulated channels champion Canadian cannabis.

Since Sept. 2019, the number of patients registered with licensed producers has fallen steeply, which many attribute to Canada’s lacking medical cannabis program. This could also be driving the increasing number of non-LP production registrations.

While the legal industry might not be progressing as fast as StatsCan portrays, Pateras says it still has come a long way in two years considering its highly experimental rollout.

“I think we know more stores are needed, we know that more products are needed in terms of different formats, more affordable pricing, and we know that potency levels are going to be important as well,” Pateras said.

In Colorado, the oldest legal recreational cannabis market that’s now going on seven years, Pateras says the legal industry now accounts for about 75 per cent of total weed sales. He said a big part of Colorado’s success is having one store per 10,000 people.

“We’re nowhere close to that in Canada – not even close. And we know that stores drive sales because consumers want convenience,” he said. 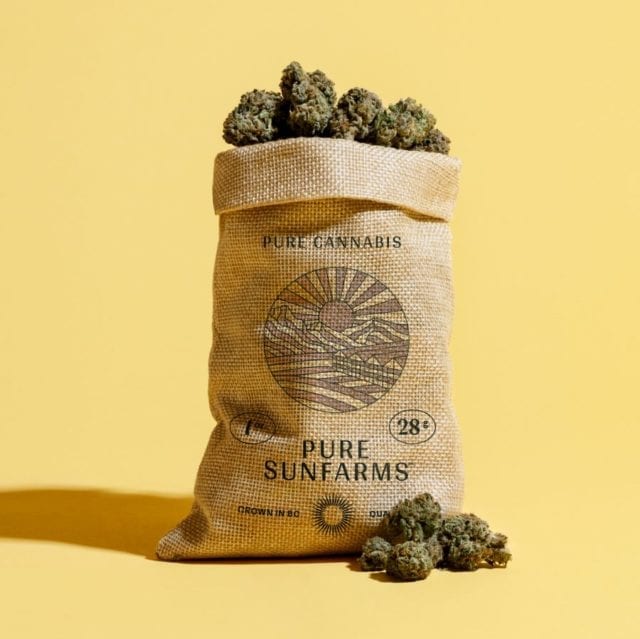 Pure Sunfarms introduced 28-gram bulk packages into Ontario and B.C. recreational cannabis markets in March. The product is listed as the cheapest dried flower product at the OCS at $4.20 a gram. Press photo

There are currently over 1,100 stores open in Canada, or around one store per 34,000 people. Ontario, the country’s biggest provincial market with almost 15 million people, recently said it will double store approvals to faster add to the 150 stores that are open today.

However, Alberta has now surpassed the 1-to-10,000 ratio with 518 stores for its population of around 4.5 million, which could in fact point to oversaturation there.

He praises LPs for introducing more bulk dried flower brands this year, that sell for around $5 a gram.

“Those value sized products now encompass a 40 per cent market share in Ontario, for example, which really goes to speak to how important price is as a purchasing lever for customers,” he said.  “I think you’ll see that trend continue.”

As Health Canada becomes more comfortable regulating the industry, he expects the regulatory requirements will loosen and licensing, building and operational costs will decrease in the process.

At the same time, more small-to-medium scale cultivators have come online this year and consumers are responding positively. 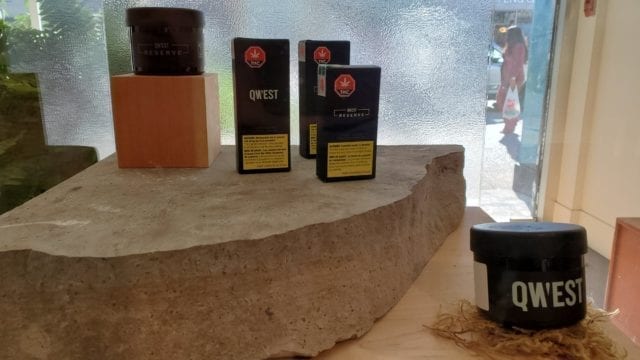 For Pateras, the Canadian federal government should also loosen rules on things like THC caps on 2.0 products. He says the big producers need to get their act together an offer a wider array of specialized products.

“Today in Ontario, there are only five edibles brands made by four manufacturers. Whereas on the black market, there are dozens and dozens of options with much higher potencies,” he said.

But even in Colorado where rules are less strict and more products are offered, converting the last 25 per cent of consumers to the legal market has proven a tough task.

Pateras sees a long road ahead for the Canadian industry to reach Colorado’s success.

“When you have such an ingrained black market with people who’ve been growing for friends or little side businesses, I think it will take years if not decades for the cannabis market in Canada to be completely converted,” he said.

“That’s just natural. That’s by virtue of the size and complexity of what the legal market is trying to replace.”