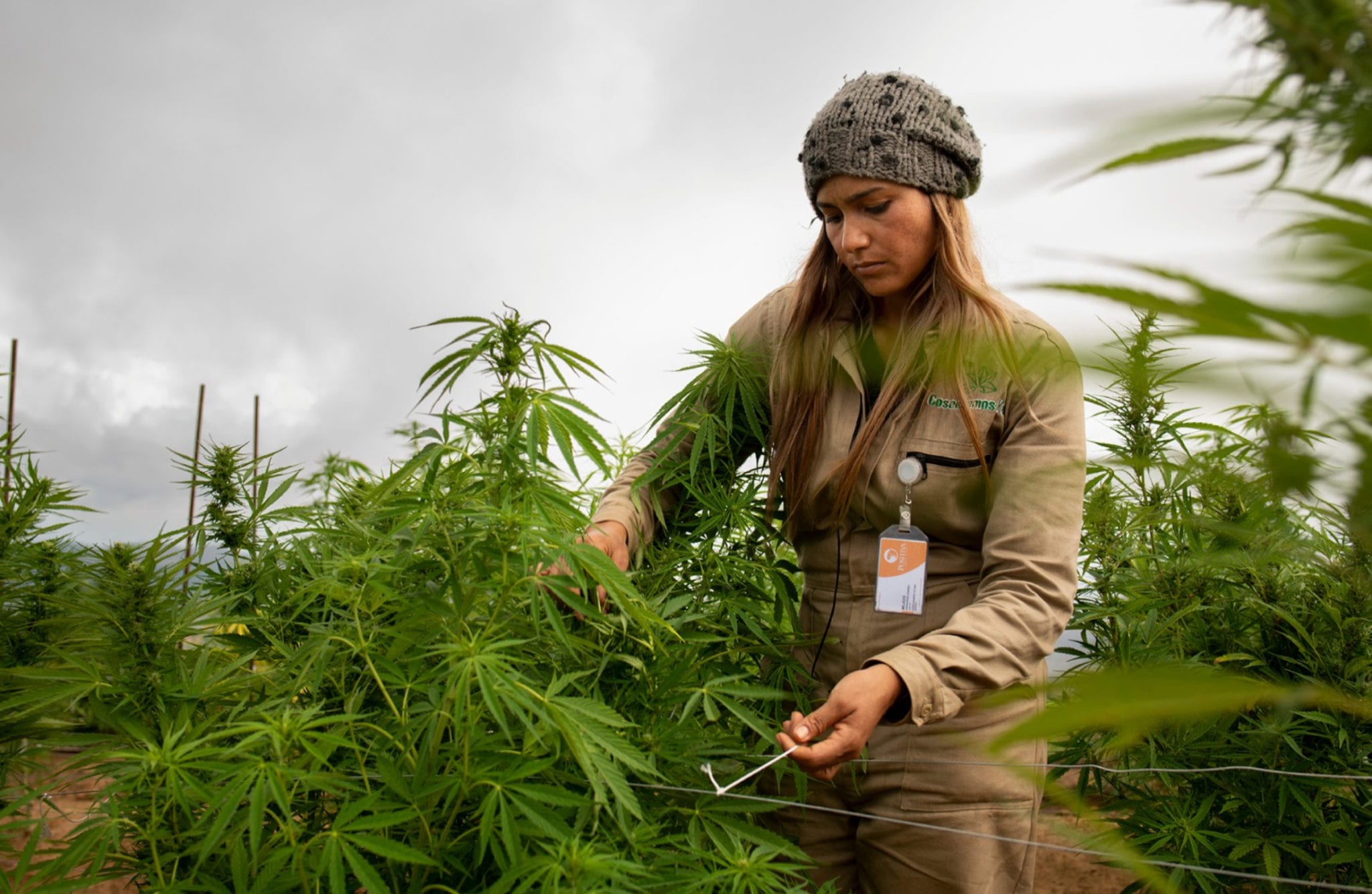 With over 190 million consumers worldwide, weed is the most popular drug on the planet. And as old stigmas crumble, more than 50 countries are in various stages of advancing regulated recreational or medical markets.

But drug experts warn if new markets take after current U.S. and Canadian regulatory models, they will continue to be controlled by wealthy, white businessmen and fail to address the harms caused by prohibition.

The International Drug Policy Consortium (IDPC), a global network of 200 NGOs, set out this month to provide policymakers a comprehensive vision “for regulated cannabis markets that advance social justice, equity and human rights.”

The IDPC published a report containing 20 key principles on how to create more equitable cannabis industries that promote harm reduction and the health of drug users, give business opportunities to communities worst affected by the war on drugs, are inclusive of women, protect the environment and resist corporate capture. 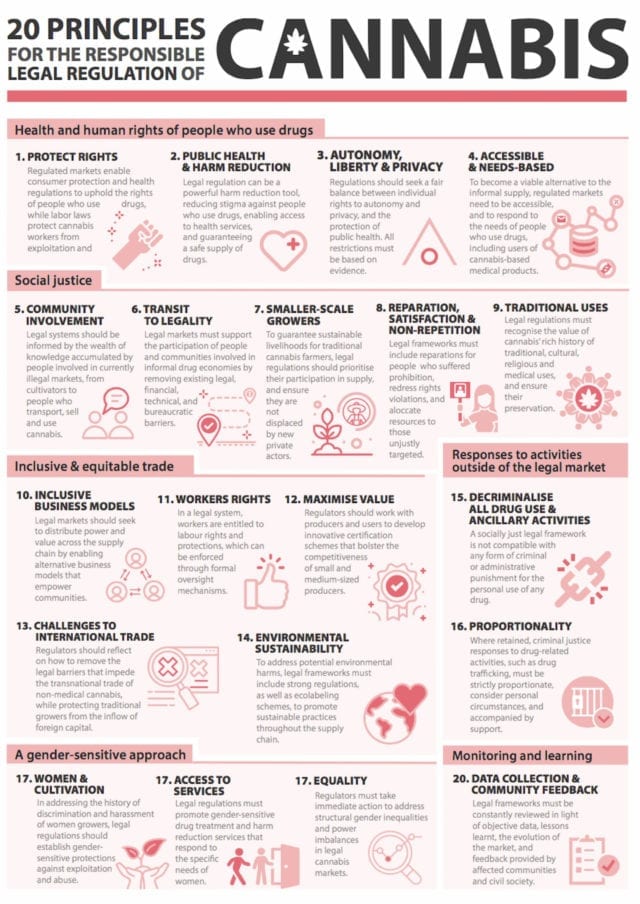 Image via IDPC’s advocacy note: “Principles for the responsible legal regulation of cannabis”

Adrià Cots Fernández, an IDPC advocacy officer who helped write the report, says the principles act as a checklist for their members as they press for cannabis policy reform.

“Our strategy is to mobilize and support our membership,” he said in a phone interview. “And what we want is to make sure that our members have in mind all of these implications of legal regulation when they engage with their politicians, their government, and the government mechanisms in their countries — they can push for this.” 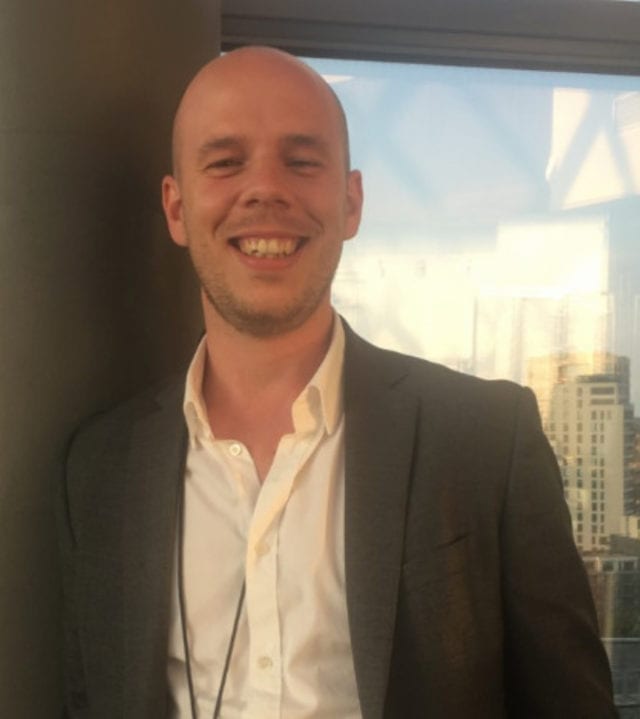 Because the revolution on cannabis policy is very different around the world — from Luxembourg to Jamaica to Indonesia —  there’s no one-size-fits-all approach, Fernández says.

And since it’s very hard to put all of these policy ideas into law in each country, the NGOs have to be selective while picking their battles. The idea behind the principles is for every organization to identify the biggest regulatory gaps faster.

“We need a vision, and this is a vision. So we’re offering something new here and each organization opportunistically will see what’s the best strategy for them in their national context,” Fernández said from IDPC’s London headquarters.

Fernández explains that the IDPC principles were a result of repeated demands from its members of wanting to confront how current cannabis regulations favor big business while leaving out local communities.

In just over a decade, Canada, Uruguay and 11 U.S. states have legalized recreational weed, while medical cannabis programs have been adopted in 33 U.S. states and over 50 countries, including the U.K., Israel and Colombia.

IDPC’s Latin American members, which produced the first draft of the advocacy note last year, warn how Canadian corporations have flooded the region controlling over 70 per cent of Colombia’s and Uruguay’s cannabis markets. 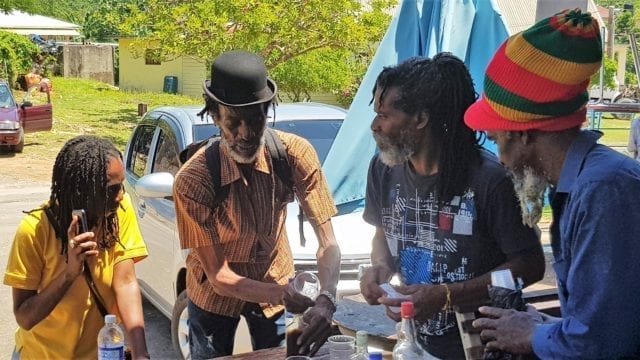 Traditional, cultural and religious uses in countries like Grenadines and Jamaica should be taken into account when regulations are formed, IDPC says. Photo by Martin Jelsma via TNI

“The reality is that newly created legal markets are dominated by private actors that do not share or understand this history of oppression, and are unwilling to address it,” the IDPC said in a statement.

Fernández says Colombia’s medical market regulations serve as a prime example of policies that leave behind traditional cannabis farmers, who have for decades faced horrific conditions of exploitation, military intervention and the eradication of crops.

While the Colombian government added a provision that corporations have to source 10 per cent of their production to small and medium cultivators to try to protect them, he says it hasn’t been enough.

For instance, in 2017 Canadian-headquartered producer PharmaCielo teamed up with a small farmer cooperative in Colombia called Caucannabis to help each other succeed in the legal weed trade. But the cooperative says they have yet to see any economic benefits, according to a June report by Cannabis Wire.

“If you regulate a market with only some soft interventions, money is just too powerful, as you see in Canada and everywhere in the world, investors have come and muscled out people from the legacy market,” Fernández said.

For traditional farmers around the world to truly benefit from legalization, there needs to be strong intervention from regulators to remove existing legal, financial, technical and bureaucratic barriers.

In Colombia, a legacy grower has to absorb high costs to gather licences, land leases and expensive cultivation technology, while navigating rigorous requirements from six distinct federal agencies. In total, an investment of US$150,000-200,000 is needed for every half hectare of medical weed production in the country, according to Colombian economic research institute Fedesarrollo. 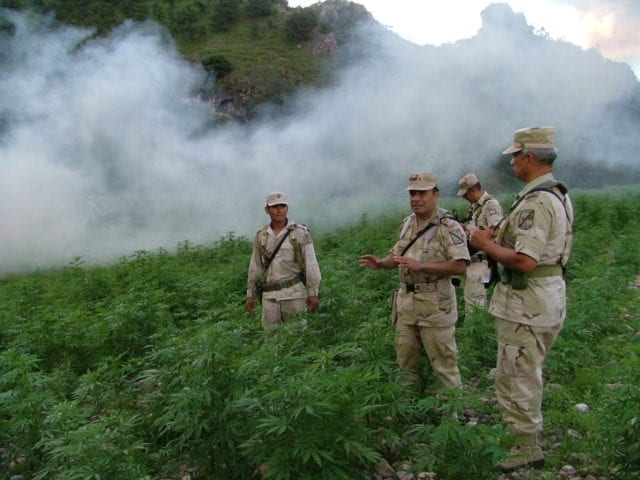 The Mexican army eradicating illegal crops in 2003. Photo by oswaldo via Flickr

Fernández says several IDPC organizations are actively working with Mexican lawmakers to avoid the same regulatory pitfalls as the country is expected to legalize recreational cannabis in the near term.

The seven Mexican NGOs also voiced concerns over the lack of environmental considerations when it comes cannabis policy reform. That propelled the IDPC to include a sustainability principle when revising a draft of the advocacy note in February.

Just like California’s Humboldt State University, Fernández wants to one day see fair-trade certification similar to that in the coffee industry.

Canada and US support Big Cannabis, not minorities

Fernández notes that no jurisdiction has a perfect record on legal weed.

“The corporate takeover in Colombia is literally the same thing that’s happening in the streets of the big cities in Canada, where the people who have suffered from prohibition are being left out of the legal market,” he said.

With Canada’s Cannabis Act up for parliamentary review next year, Fernández is pleased to see vibrant discussion on how to make regulations fairer.

Canadian advocacy group Cannabis Amnesty sent an open letter to Prime Minister Justin Trudeau this month, calling for a more equitable industry which so far has largely left out people of colour.

The advocacy organization has also called out the federal government for its abysmal record of clearing thousands of low-level cannabis charges that have disproportionately hurt minorities, which is something Fernández says needs to be addressed faster.

In the U.S., Black, Indigenous and minorities own less then 20 per cent of the state-level legal markets, the IDPR report notes. That’s despite Black Americans being almost four times likelier to be arrested with possession charges than white Americans.

Fernández says Massachusetts is the best example of responsible social justice policy in the Northern Hemisphere.

“Their approach checks off a lot of boxes on our 20 principles.”

But even with the state’s more robust social equity program, Netflix series Patriot Act showed in May how there’s still only one Black-owned weed dispensary open.

Patriot Act host and comedian Hasan Minhaj cites how many social equity licence holders across the U.S. get targeted by big weed corporations that offer predatory loans to try to take over the business.

Not only should governments take social equity seriously, Fernández says: it’s an ethical duty for the entire industry.

Yet Minhaj highlights that many U.S. states have corruptly passed onerous regulations that only the largest multi-state operators can navigate and thrive in. Not only does that further entrench and exacerbate inequality, but it’s made some former politicians very rich. For instance, the list of board members at New York-based Acreage Holdings include former U.S. House Speaker John Boehner and former Canadian Prime Minister Brian Mulroney. Both have strongly supported the war on drugs in the past but since raked in tens of millions in the legal weed game.

Fernández acknowledges there’s still a huge deal of work ahead to fix flawed regulations in the U.S. and Canada.

“But I don’t think it’s too late,” he said. “That’s the beauty of regulation. It’s going to keep evolving every year and that will present new opportunities to amend existing regulations to make them more fair and more inclusive.”

The IDPC report notes that its core principles are “just the beginning of an ongoing and iterative process through which the IDPC network will reflect and work on the legal regulation” as it evolves.

For the 200 drug groups, legalization is the ultimate harm reduction tool — and with cannabis, more evidence-based research is needed to show its therapeutic benefits, which may include reducing the use of opioids.

During a lengthy 90-minute phone interview, Fernández had to pause to take a call with the United Nations Commission on Narcotic Drugs, which is poised to vote on the international rescheduling of cannabis in December. This could be another watershed moment in the history of the weed reform movement, he says, and will open the door for better research and access.

As more credible research emerges, Fernández expects it will also compel lawmakers to open up access for cannabis patients.

Despite Canada being the first G7 nation to legalize adult-use, patients still frequently get their medicine from underground channels due to high prices and a lack geographic accessibility in the legal market.

“Cannabis cannot be a medicine for rich people. Governments have an obligation to allow for accessibility to the medicines,” Fernández said. 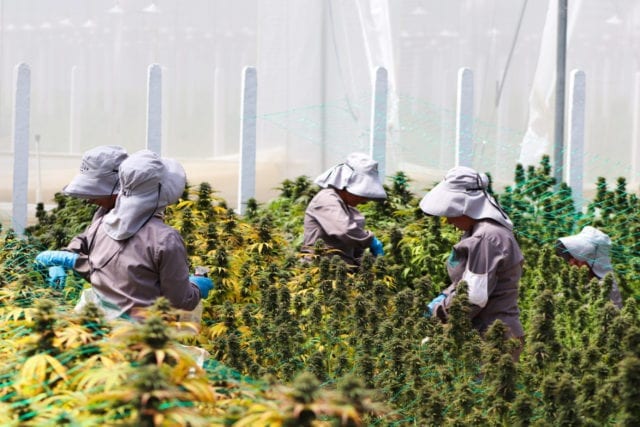 The drug policy expert explains that in many countries — even those that have legalized — women are more vulnerable in receiving cannabis-related health services because they are stigmatized worse than men.

Women have also been heavily involved in producing unregulated cannabis over the decades but have been rendered invisible in new legal markets, he said.

“Women have been subject to a really heightened risk of exploitation, sexual abuse, and all sorts of mistreatment even in the legal industry.”

Regulators and companies must make an effort to ensure women become not only visible, but are given fair access to senior management positions.

The IDPC’s ultimate goal is to use cannabis as an opening to address reform issues for all drugs, and the groups hope to create a wider document that covers all substances in the near future.

“It will be a bad outcome if we ended up in a world where cannabis is fantastically regulated, but then all the other drugs are still stigmatized and criminalized.”