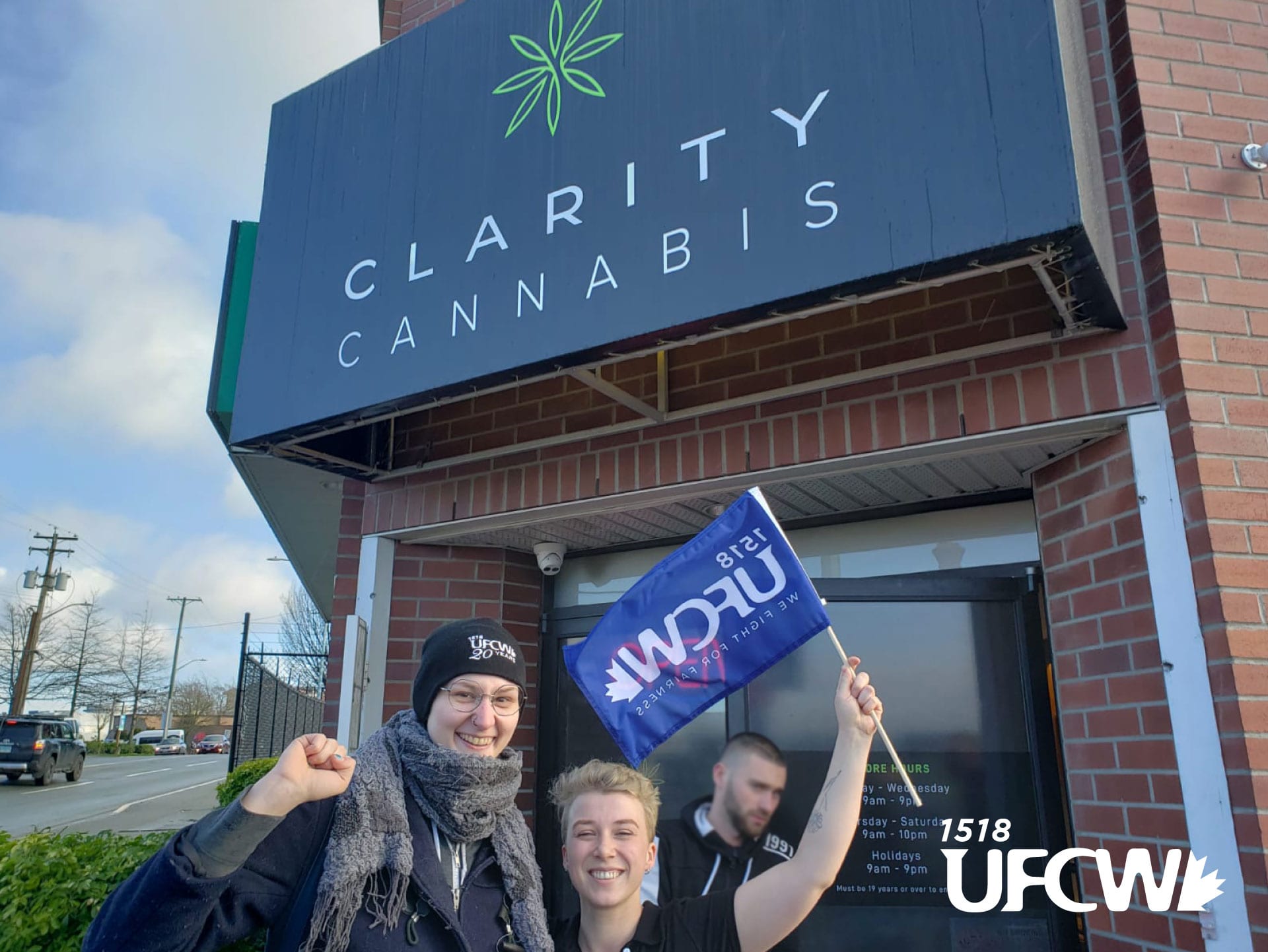 A group of Victoria employees are the first private weed workers to join a Canadian union.

On Tuesday, two Clarity Cannabis retail locations joined the United Food and Commercial Workers Union B.C. branch, local 1518, to better bargain for fair wages, workplace safety and job education and training. Of the retailer’s seven locations across B.C., just the Victoria locations have voted to unionize. The union represents over 250,000 workers across Canada and 24,000 people in B.C.

Budtenders, the people who sell weed in cannabis stores, have felt the brunt of Canada’s frustrations with the new legal cannabis market, which one budtender says could be easily solved with the help of a union.

“I have noticed a drastic difference in the way I’m being treated by customers between grey market and legalized stores,” Clarity Cannabis budtender Emma Belen told Mugglehead. She says customers can bring her warm socks and chocolates — or verbal abuse when they’re angry at the quality and price of weed.

With these wins, #cannabis workers are showing the power of standing together to protect good jobs for hardworking families. https://t.co/3jLc2WS50N #1u #UnionStrong pic.twitter.com/VVJvvLuNAC

“This can look like swearing and in the rare cases threatening. I’ve been belittled and insulted by people who have ‘been growing for years,’ despite being told that we don’t control the quality,” she said.

“For the most part I don’t mind answering questions or concerns, but it becomes a problem when I’m being mistreated and sworn at for problems I can’t control.”

She’s even had other customers get involved and stand up for the employees — but it isn’t the customer’s job to ensure workplace safety, Belen said.

Creating a safer work environment and bargaining for fair wages are the main things unions are asked to help with, UFCW local 1518 secretary-treasurer Patrick Johnson said. This can include ensuring people don’t work alone late at night, mandating that managers are present, or even just educating employees they have the right to not be yelled at.

He said UFCW was approached by the Victoria Clarity employees because the workers wanted budtending to be their main job — not just one of many jobs they have to work to support themselves.

“One thing that has been really clear with these workers is they have been tremendously excited about both their job and the industry,” he said. “And they really want to look at, not just Clarity, but for budtenders across the province: How do you make this a good sustainable industry to have a job in?”

Clarity Cannabis won’t be the only to unionize, prof says

Cannabis companies and employees needed to establish themselves in the space first, before looking around and asking for better working conditions. And issues like fair wages and the health and safety of employees is the bread and butter of unions, she added.

In America, where legal states are several years ahead of their northern neighbours, UFCW covers thousands of workers, Johnson said. Now Canada is following America’s lead.

“Across Canada UFCW gets a lot of interest from cannabis workers on joining the union,” Johnson said. “As the industry continues, grows and in some ways stabilizes there will be more people joining the union.”

When people talk to Weststar about unions they often voice their concerns unionized workers will put the company out of business by asking for things the company can’t afford.

But collective bargaining rarely ends up like that, she said.

“There aren’t a lot of drawbacks really. You now have a collective body that can ask for things — doesn’t mean you’re going to get them but it does mean you have slightly more leverage to get them than you did before.”

For the most part, Belen says Clarity Cannabis employees just want to work at a job they love and earn a living wage in Canada’s sixth most expensive city.

“Most of our staff is full time and just want to talk about cannabis with people and make a living,” she said. “I look forward to working with Clarity to create a healthy, happy and safe working environment.”