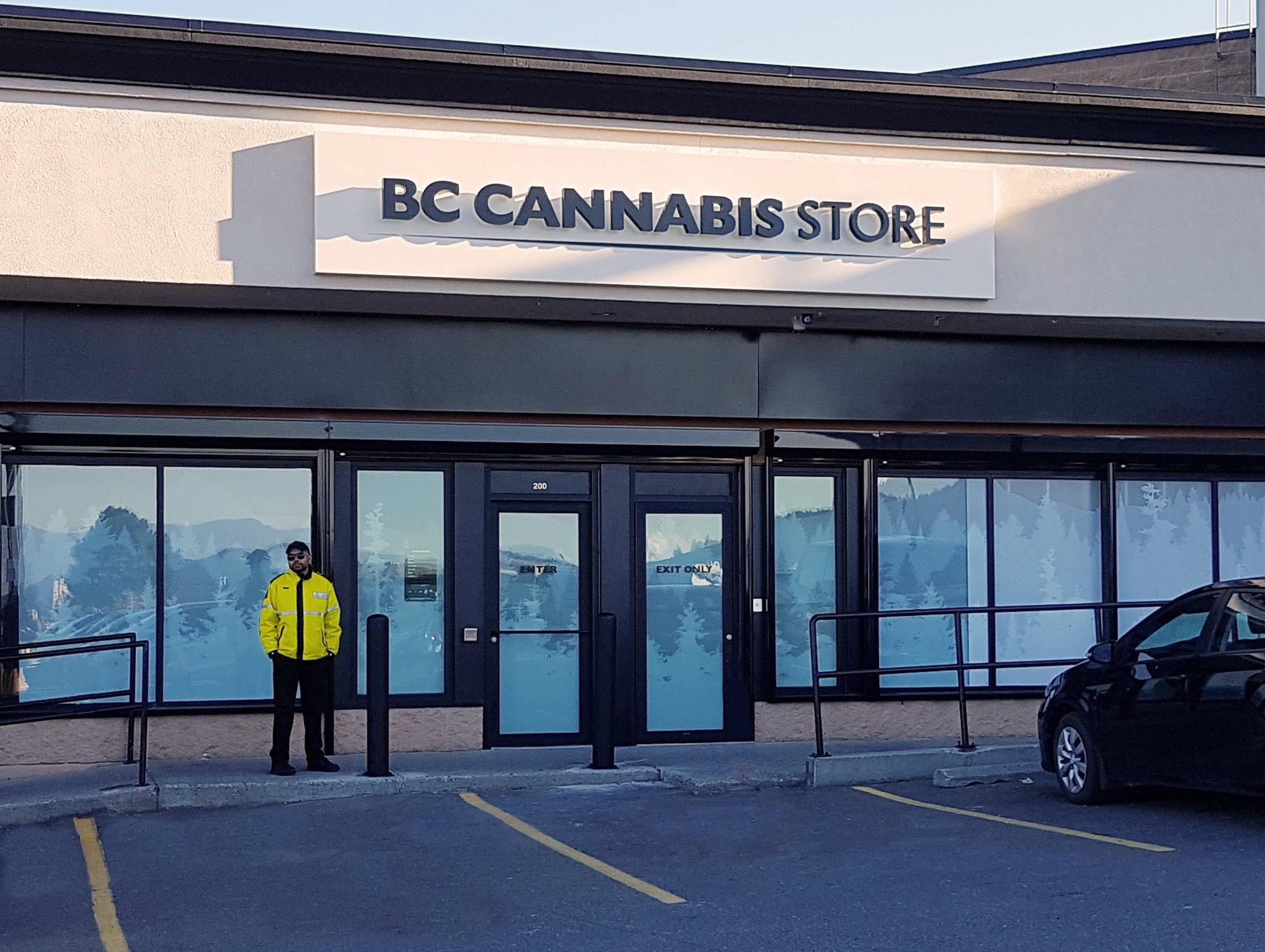 In British Columbia and Ontario, provinces handle wholesale distribution but also compete with private retail. In other areas, like Quebec and New Brunswick, private pot shops aren’t allowed and province-run stores are the only option.

But another potential model is challenging the status quo.

Last month, the Alberta government proposed stepping back from e-commerce and delivery, by taking the provincial store offline and giving full jurisdiction to private stores.

If the idea comes to fruition, the province would be taking free-market approach in Canada’s regulated cannabis space, one that private retailers welcome. 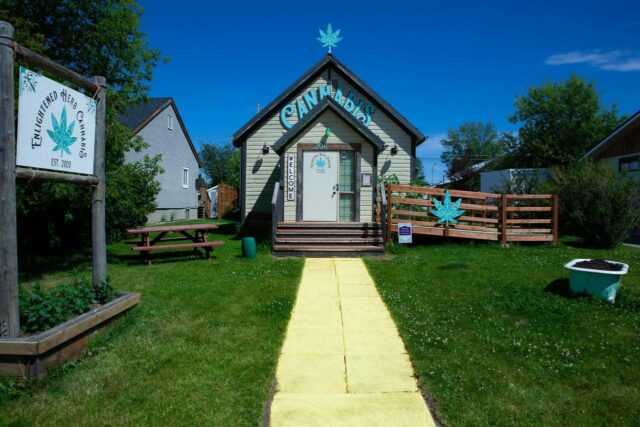 Private stores in British Columbia worry about the longevity of their businesses, and less competition from the provincial store is necessary, says Jaclynn Pehota, executive director of the Association of Canadian Cannabis Retailers.

“That is something that is top of mind for my members. The margin pressure that the public stores represent when they move into communities is almost untenable.”

Of the roughly 360 pot shops in B.C., 27 are BC Cannabis Stores, and the province-run store is the only legal option for mail delivery.

Since July, licensed pot shops have been able to deliver cannabis to B.C. homes, a move that was presented by the provincial government as a reason to choose regulated sellers over illicit ones.

It’s been an exciting opportunity for some and hasn’t paid off for others. Pehota says it’s too early to tell if the services are meaningful to the market.

Alberta’s decision will hopefully spur more provinces to leave the industry in the hands of the private sector, says John Kaye, co-founder of Burb Cannabis.

“Obviously, it’s not ideal to have your wholesaler also competing with you in the retail space, but it is what it is. No one said it would be easy,” he says.

“We just definitely hope that wholesale can be left at that, and then private stores can have a chance to compete, because the government definitely has an edge in terms of the entire supply chain.”

Jess Smith, the manager of Speakeasy Cannabis in Ontario, says she doesn’t want to see the Ontario Cannabis Store any more involved with retailers than it is now.

“Taking the store offline would benefit us retailers as it would help drive more business to our brick and mortar retailers — giving more opportunity to deal directly with the LPs, giving the customer more of a choice. We also have the ability to deliver to the door like has been done in the past,” she says in an email, adding she would love to see delivery made permanent.

The Ontario government has temporarily allowed cannabis delivery and curbside pickup in some areas during the pandemic, and recently suggested keeping the services permanently.

The OCS is the only legal option for online weed sales in the province. 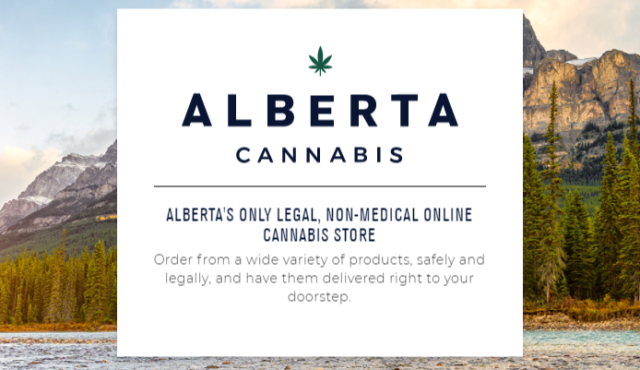 Alberta Cannabis is currently the only online retail and delivery service authorized in that province.

“I do feel that the provincial government’s role in the cannabis industry should be more on a regulatory level than as a seller/distributor, so I see any changes that bring that into a better balance as positive,” she tells Mugglehead in an email.

“My understanding is that online sales at the AGLC site have only been accounting for about 5 per cent of all cannabis sales in the province, so I’m curious if this change to allow retail stores to sell online will alter people’s purchasing habits, or if people will still prefer to visit a store in person?”

The St. Albert Gazette reports that online sales from April 1 to Oct. 31 accounted for around 1 per cent of the AGLC’s total cannabis sales.

Private retail advocate Pehota says B.C.’s direct-to-consumer sales model, or farmgate sales, should be started as soon as possible to give retailers a leg up.

“Unfortunately, the situation that [retailers are] facing in many cases is really, really dire. And rolling out a program like that, in the third quarter of 2022, might be too late for a lot of these businesses by that point,” she says.

In the short term, Pehota says BC Cannabis Stores shouldn’t expand any further, to limit competition. 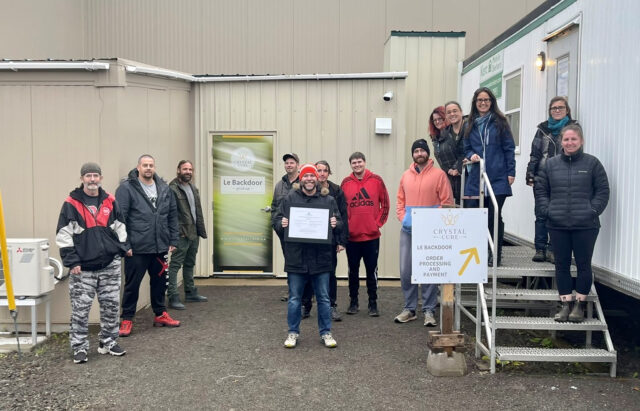 Customers can reserve products online, or drop in at Le Backdoor from 10 a.m.–5 p.m. Tuesday to Friday and place an order directly. Photo via Crystal Cure

“We hope to bring our own craft curations to the B.C. market and definitely work with the growers that we’ve already been working with to source our flower [that] we’ve been stripping it out east,” Kaye says.

And there’s an opportunity to provide an array of products, he says, which is big for retailers to remain competitive.

While there isn’t private retail, New Brunswick became the second province to implement farmgate sales, after Ontario. Cultivators celebrated the decision, by Cannabis NB, which helps them stand out.

“Our elected officials really need to start to align their thinking on cannabis as an industry and as an economic development and job creation engine, as opposed to a strictly public safety exercise,” Pehota says.