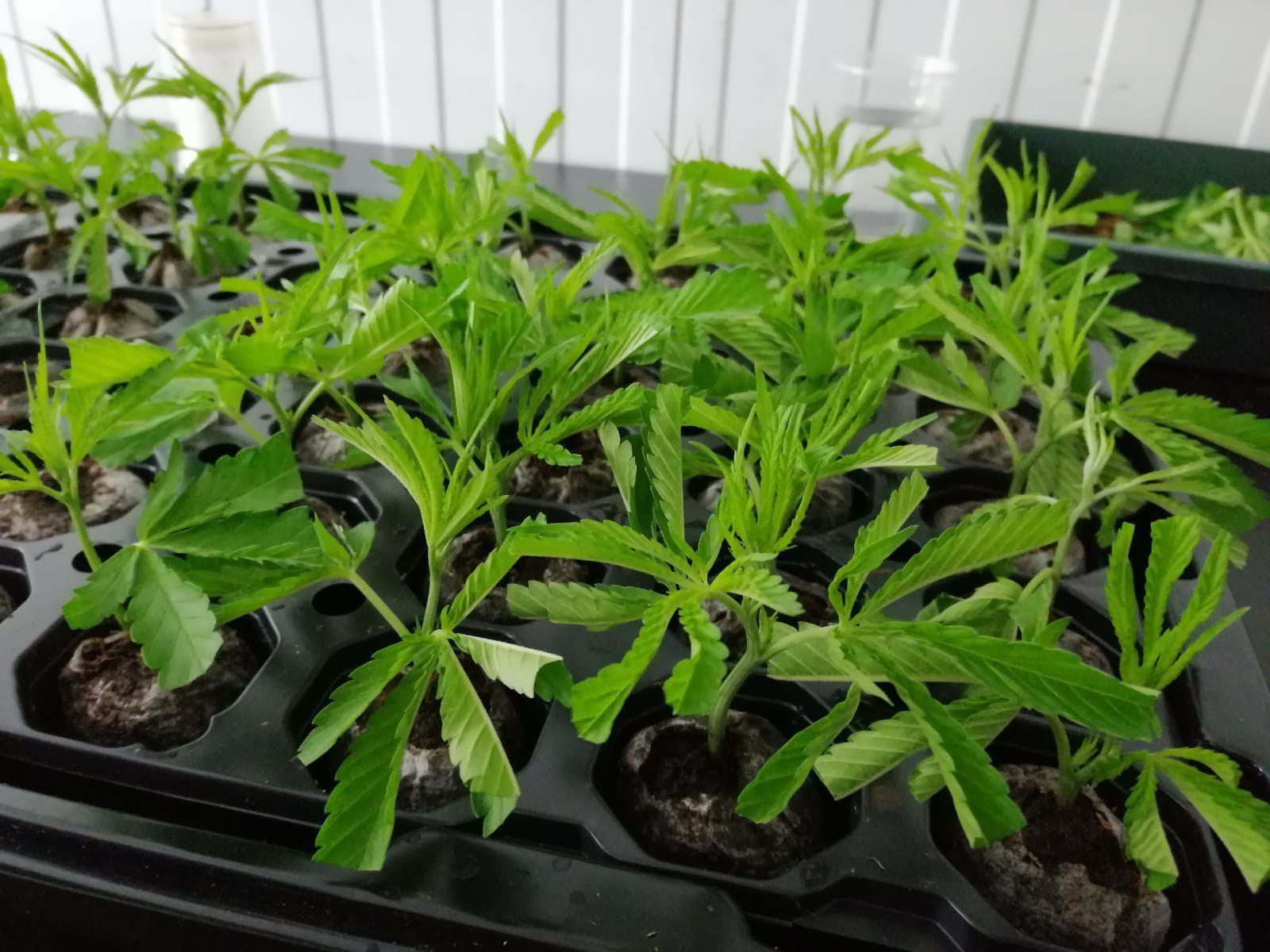 As scientists record and predict imminent environmental catastrophes due to global warming, cannabis investors are focusing more than ever on the environmental and social impacts of a company, as well as the long-term economic benefit that monitoring these areas will bring.

A report by the United Nations Intergovernmental Panel on Climate Change (IPCC) detailing irreversible human-caused damage to the global ecosystem has sent shockwaves throughout financial markets, and is catalyzing investor interest in environmental, social and governance (ESG) reporting, according to lawyers at Denver-based firm Husch Blackwell LLP.

Fund managers focused on ESG criteria will have an increased focus on environmentally conscious companies and substantial sums of investment dollars will likely flow to those that commit to more aggressive plans, write attorneys Alyssa Samuel and Marshall Custer in a post on Husch Blackwell’s website.

ESG reports outline metrics of a company’s business practices over a period of time, which the lawyers say is essential for a company to thrive and attract investors in the fiercely competitive cannabis industry.

The lawyers suggest looking at sustainable practices in the wine industry like regenerative growing, filtration systems and other biotechnologies.

A small but increasing number of public weed companies are beginning to publish ESG reporting.

“Increasingly, institutional investors are using ESG principles to guide investment decisions, and as one of the first global cannabis companies to publish an ESG report, we have achieved another corporate milestone that distinguishes us as an industry leader and market disruptor,” Alvaro Torres, CEO of Khiron Life Sciences Corp.  (TSXV: KHRN) (OTCQX: KHRNF), said in a statement this week.

Khiron, which released its first ESG report this week, is an international medical cannabis producer based in Toronto with operations in Latin America and Europe. 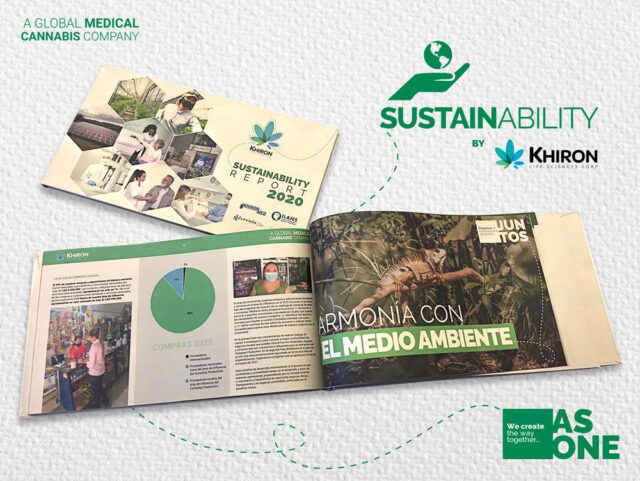 Khiron has released its first environmental, social and governance report, which tracks sustainability metrics in 2020. As the dangers of climate change become more apparent, investors are putting more emphasis on this type of information

In its 97-page report, Khiron outlined its commitments to sustainability, which include a solar park to reduce energy consumption at production facilities by 40 per cent, as well as initiatives to measure and reduce consumption of energy, water and other materials.

The company says it secured 88 per cent of production supplies from local suppliers, and 74 per cent of hires at its production facility were local residents.

Khiron says it also supported local communities impacted by Covid and donated PCR testing equipment to the Santa Clara hospital in the Colombian capital of Bogota.

The company reduced waste sent to landfills by building an outdoor nursery made from 90 per cent construction scrap materials. Rubicon says it has 78 per cent diversity across its employee base.

Controlling for perfect environments to grow cannabis heats up the planet

The IPCC report published this week gives a grim ultimatum that if greenhouse emissions and the temperature of the planet don’t decrease or stay the same in the next decades, lack of action could lead to deadly consequences for humans.

Another report by risk research company Swiss Re Institute says that worldwide losses totalled US$190 billion from natural disasters in 2020, increasing 1.6 per cent over the past 30-year average.

And the massive growth of the cannabis industry is making matters worse, experts say. 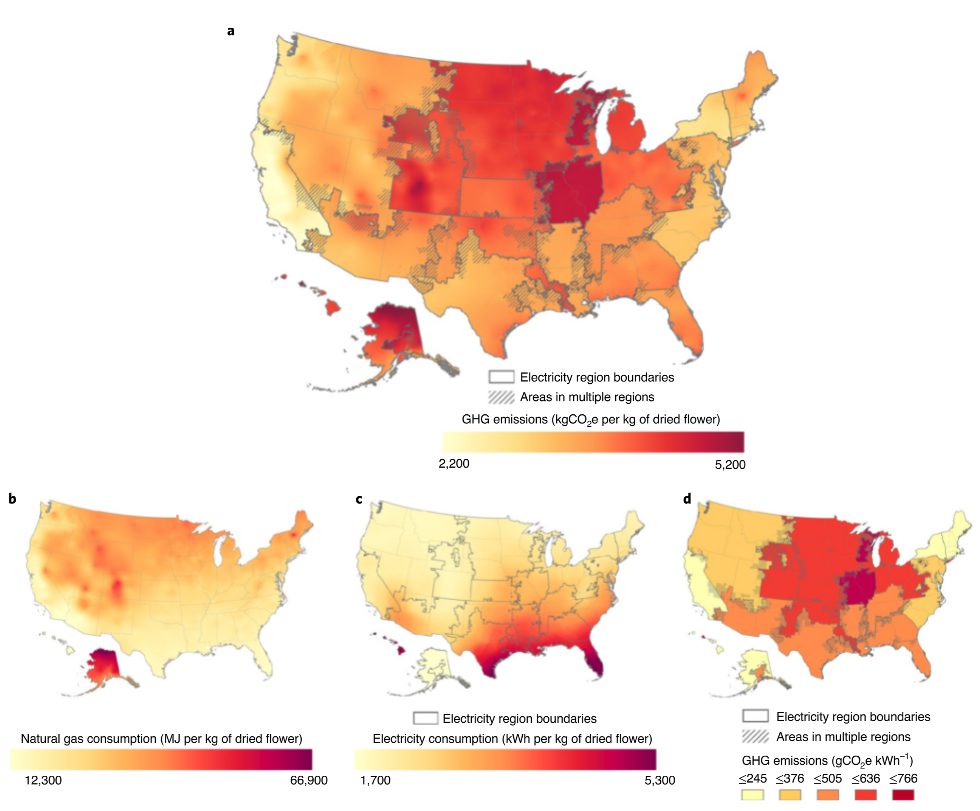 Carbon Dioxide emissions depend on the location and the needs to use heating and lighting to keep plants healthy. Image via ‘The greenhouse gas emissions of indoor cannabis production in the United States’

In the U.S. indoor grows produce, depending on location, from approximately 2,000–5,000 kilograms of carbon dioxide per kilogram of dried flower.

A study published in the journal Nature Sustainability found that more than 80 per cent of emissions from U.S. indoor grows is due to environmental control, high-intensity lighting and extra CO2 to increase plant growth.

Lightning intensities for cannabis plants can be 50–200 times higher than a typical office setting and run for 12, 18 or 24 hours, depending on the stage of the plant’s life cycle.