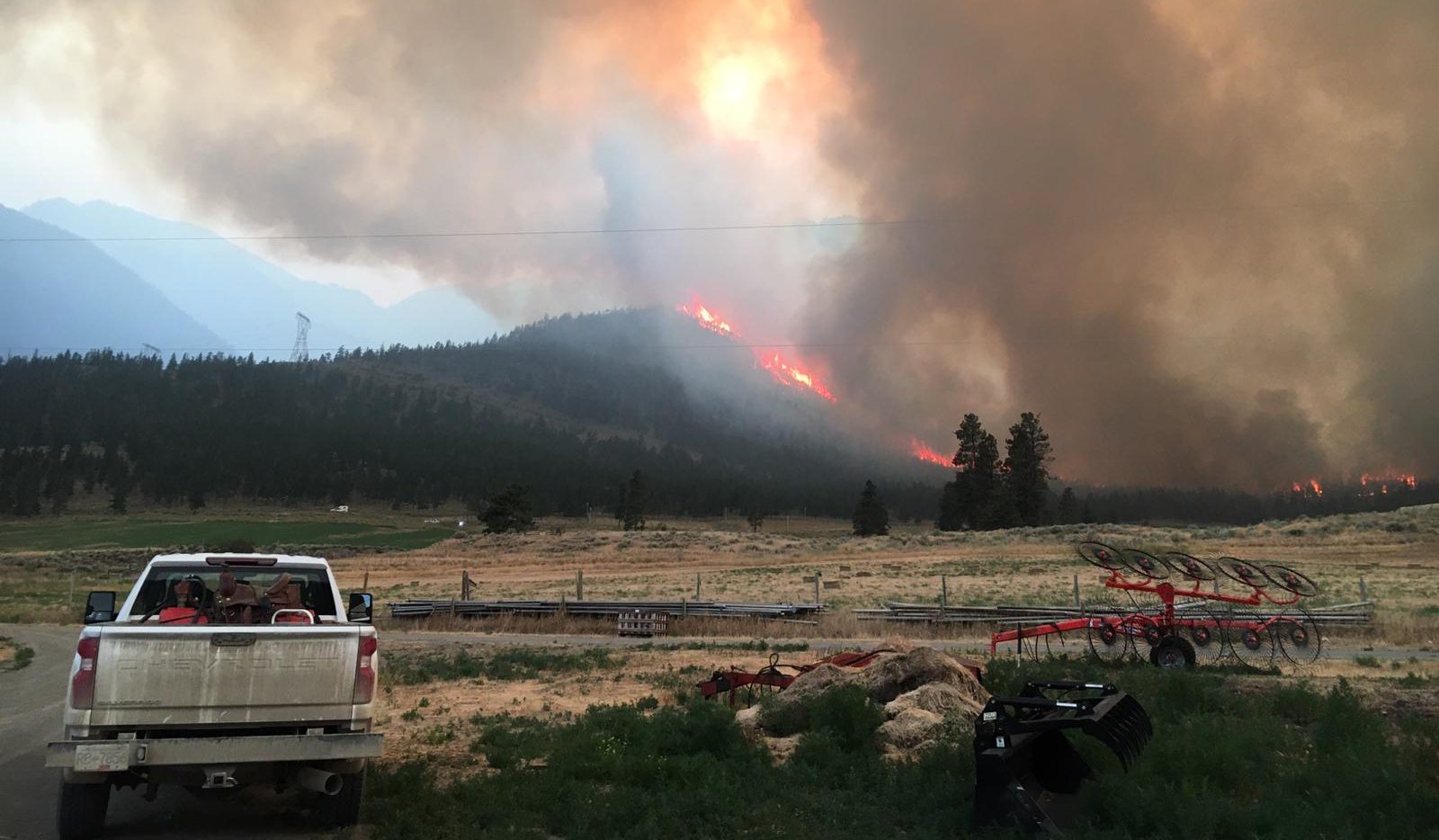 Wildfires burning through British Columbia have cannabis growers on edge only partway through an exceptionally hot, dry and dangerous season.

An early and devastating wildfire season in B.C. has flattened the village of Lytton, prompted a state of emergency and evacuated homes while others are at risk.

Before the end of July, more land has been scorched than the entire 2020 wildfire season.

Outdoor grows are particularly vulnerable, but not all indoor operations have been spared by the toll of wildfires either as long-term consequences remain unclear.

“This summer is shaping up to be one we will all remember for a long time. From heat waves to wildfires all over the province, everyone is being affected one way or the other,” says micro-cultivator Scott Rutledge of StoneGrove, an indoor growing facility just outside of Golden.

Some farms evacuated for staff safety

Wildfires are closing in on some cannabis cultivators in southern parts of the province, forcing evacuations. At the same time, poor air quality is making work difficult where it can continue, while another bout of high temperatures is in the forecast with no rain in sight.

After adjusting to record-high heat last month, Rutledge says StoneGrove is starting work sooner in the day to cope with current conditions.

“With this much smoke in the air, it is hard not to feel it in your lungs and in your head while working,” he tells Mugglehead by email, adding fatigue is a major concern and feeling run down is common at this point.

Mitigating poor air quality is pushing filters to the limit while power outages are more common due to high winds and strain on the power grid, he adds.

Aside from the threat of power outages, losing access to the cultivation facility worries Kyra Horvath, COO and master grower for Pineapple Buds, an indoor facility just outside Oliver on Osoyoos Indian Band land.

“Currently, there are two fires on both sides of us,” she says by phone. “We commute from Penticton to Oliver for work, so if there is a chance of road closure, that would really limit myself and any other employees from being able to get to the facility to maintain it.”

As a micro-cultivator, Horvath points out they don’t have the same sophisticated technology for automation as larger operations.

“All the time I’m checking the weather forecast and I’m praying to see cloud coverage or rain on one of those days,” she adds.

Southern B.C. has been hardest hit by wildfires. As of July 28, there are 67 active fires burning in the Southeast and 87 in the Kamloops fire centres. 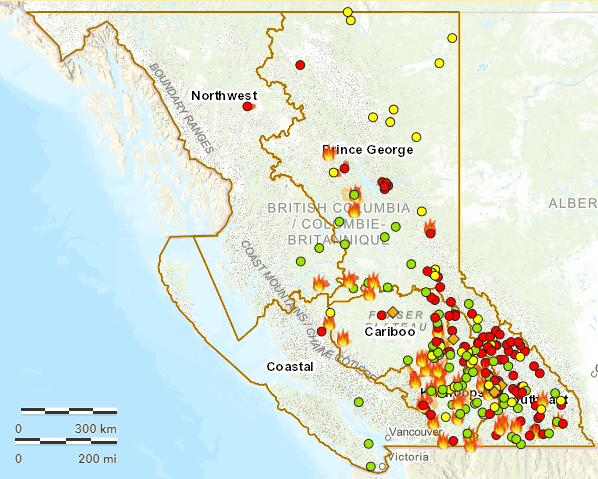 Wildfires burning in BC on July 28, 2021. Image via Government of BC

“We’re going to be on our tiptoes for sure,” says Whistler Therapeutics CEO Brishna Kamal looking ahead at the remainder of the wildfire season.

She explains over the phone that the site has been evacuated at Backcountry Harvest Organics, and it isn’t safe for staff to be working at Lillooet’s Earthwolf Farm.

Similarly, Aurora Cannabis Inc. (TSX and NYSE: ACB) has been keeping a close eye on its B.C operations, specifically the Aurora Valley outdoor grow in Westwold.

“At the moment, we have not had to evacuate our operation, but the company is taking the necessary precautions to ensure the safety and well-being of our employees, as well as supporting employees who live within the evacuation zones,” the company says in an email.

But for Kamal, crops are being lost and although it’s too early to know the extent yet, the consequences reach beyond this year’s haul.

“It impacts a lot of things beyond just workers’ health. It’s affecting the entire ecology of our farm,” she says.

An earlier fire season during the transplant stage of young crops is detrimental, she continues.

“So that’s greater loss, in our respect, I would say. But it’s also scary in the grand scheme of things having it happen earlier every year,” Kamal explains. “It’s changing the whole ecology of the area.” 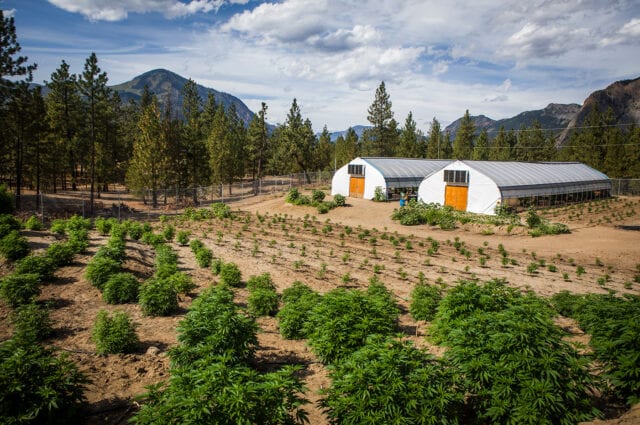 Cannabis growing outdoors at Earthwolf Farms in Lillooet B.C. where young plants are at risk during the transplanting phase. Image via Whistler Therapeutics

As wildfires burn and water is used up, the ground becomes unstable and erodes. There’s also the risk of weather systems created by wildfires, such as firestorms.

With four major wildfires burning near StoneGrove, there are undoubtedly feelings of stress.

“We don’t feel like our property is currently at risk but with a shift of winds or more lightning storms, that could change quickly. It’s hard to stay focused on the job at hand with all these factors weighing on you,” Rutledge says.

“There are many people much worse off than us right now and our hearts go out to everyone who is being affected by the fires this summer.”

Smoke taint in the province’s prominent wine industry has been studied, and researchers expect it to increase as climate change intensifies the number and severity of forest fires.

Wesley Zandberg, a UBC Okanagan chemistry professor who studies the relationship of wildfire smoke on wine grapes, identifies some overlap with cannabis.

“Even an hour of smoke exposure, the aroma molecules responsible for that smoke get trapped within the grape,” he explains in a phone interview. “It’s sort of a common sense thing: You don’t plant your best wine grapes next to a slaughterhouse or an onion dehydrating factory or something like that — they’re going to make stinky wine because the aromas get trapped inside the grape.” 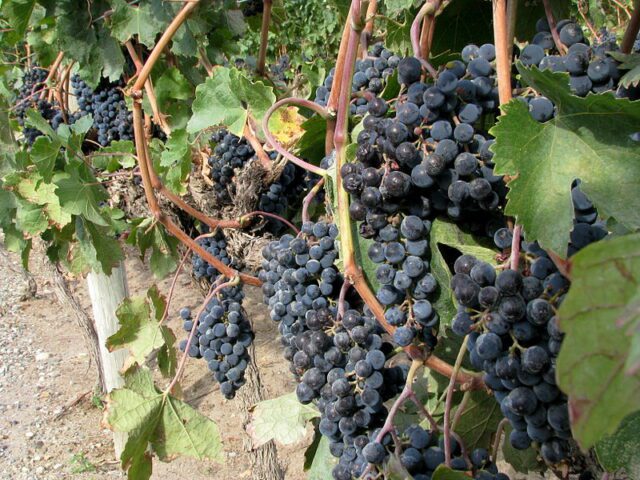 Researchers have studied the impact of smoke taint on BC’s wine grapes and expect incidences to go up due to climate change making wildfires worse. Photo by McKay Savage via Wikimedia Commons

Zandberg believes chronic exposure to smoke could alter a plant’s chemistry as aromatic molecules from smoke compete with a plant’s ability to produce aromas naturally. As well, smoke could trigger a hormonal change in the plant.

“I don’t think there’s a health risk. I also think that there may be a risk to having smoky aromas in cannabis products that aren’t smoked. But I definitely think what we will find is that chronic smoke exposure is going to change the levels of all of these essential oils and cannabinoids in the plant, I think you’re going to absolutely see that effect.”

Overall, he suggests if flowers are smoked, the difference may be minimal whereas smoke taint could infiltrate extracts and oils, which when heated may release smokier aromas.

Update (2021-7-9): This article has been updated to include comment from Pineapple Buds