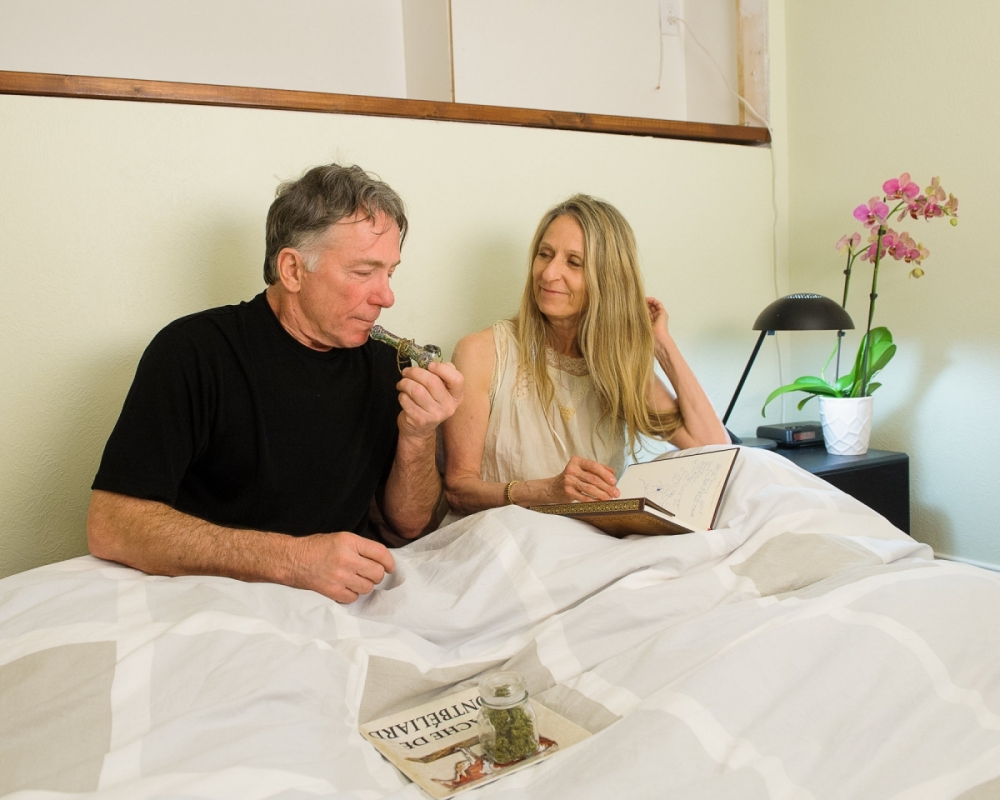 Photo by Darrin Harris Frisby via the Drug Policy Alliance

While a bedtime bong toke or late-night pot brownie may be a helpful way to get some shuteye, the relationship between cannabis use and sleep is more complex and may not lead to a restful night, according to a large-scale study.

Published online Monday in Regional Anesthesia & Pain Medicine 2021, the study led by University of Toronto researchers shows a connection between frequent cannabis use and the extremes of sleep duration.

Though insomnia is one of the most-cited reasons for self-medicating with cannabis, the evidence base is inconsistent, researchers say, and the only robust evidence for therapeutic cannabis use to improve sleep are for obstructive sleep apnea, PTSD and chronic pain syndromes.

“Despite popular use as sleeping aids, there are mixed findings about the effects of cannabis and cannabinoids on various sleep metrics such as duration, architecture, and quality,” researchers say. “Both sleep-wake regulation and human endocannabinoid physiology are immensely complex, and their interaction is not yet fully understood.”

Since sleep deprivation has become a public health concern, understanding the relationship between cannabis use and sleep patterns may help guide targeted clinical intervention and policy development, they add.

The sleep study used the cross-sectional National Health and Nutrition Examination Survey from 2005 to 2018 and categorized respondents as recent or non-users based on if they’ve used cannabis within the last 30 days, respectively.

Of the 21,729 American participants between the ages of 20–59 who were used in the analysis, 3,132 were determined to be recent users.

According to the study, they were more likely than non-users to report both short sleep (less than 6 hours) and long sleep (more than 9 hours). Optimal sleep is considered between 6–9 hours. 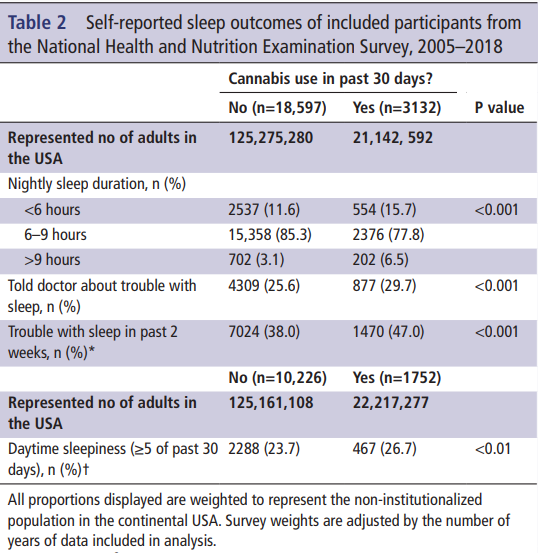 Chart via ‘Recent cannabis use and nightly sleep duration in adults: a population analysis of the NHANES from 2005 to 2018’

The study shows a “significant association” between recent cannabis use and the extremes of nightly sleep duration, as well as a connection between how often cannabis is used and sleep periods.

Those who used cannabis 20 out of 30 days are considered “heavy users” and are at a greater risk than non-users to experience both extremes of sleep duration, according to the study.

Moderate users — those who used cannabis fewer than 20 out of 30 days — were more likely to have a longer sleep but not a shorter one, compared to non-users.

Data didn’t show a link between cannabis use and daytime sleepiness.

“With our cross-sectional analyses, we can only speculate that these findings may be related to an unknown consequence of repeated cannabis exposure alone or may be a reflection of other underlying sociodemographic or health factors,” researchers say.

The amount of cannabis used by survey participants was not reported, so researchers say the results “imply that frequency of use alone may impact sleep architecture,” and that further clinical study is needed to determine the dose-response relationship between pot use and sleep.

Given the survey responses were self-reported, they’re subject to selection bias, and ongoing stigma around cannabis use may influence how people respond were also noted as limiting factors.

Despite limiting factors, the results didn’t differ between survey years, “suggesting that the effects of this response bias did not differ over the study period.”

Researchers say that the prevalence of cannabis use and sleep deprivation is a “potential cause for concern” since sleep disturbances can lead to using cannabis.

“This can perpetuate cycles of increased cannabis use, progressive sleep disturbances, and acute cessation leading to withdrawal which may add further negative effects to sleep architecture and quality,” they add.

“The importance of adequate sleep is underscored by the known health consequences of chronic sleep deprivation and chronic oversleeping. Both states can predispose to traumatic injuries, cardiovascular comorbidities, depression, cognitive deficits, and pain.”