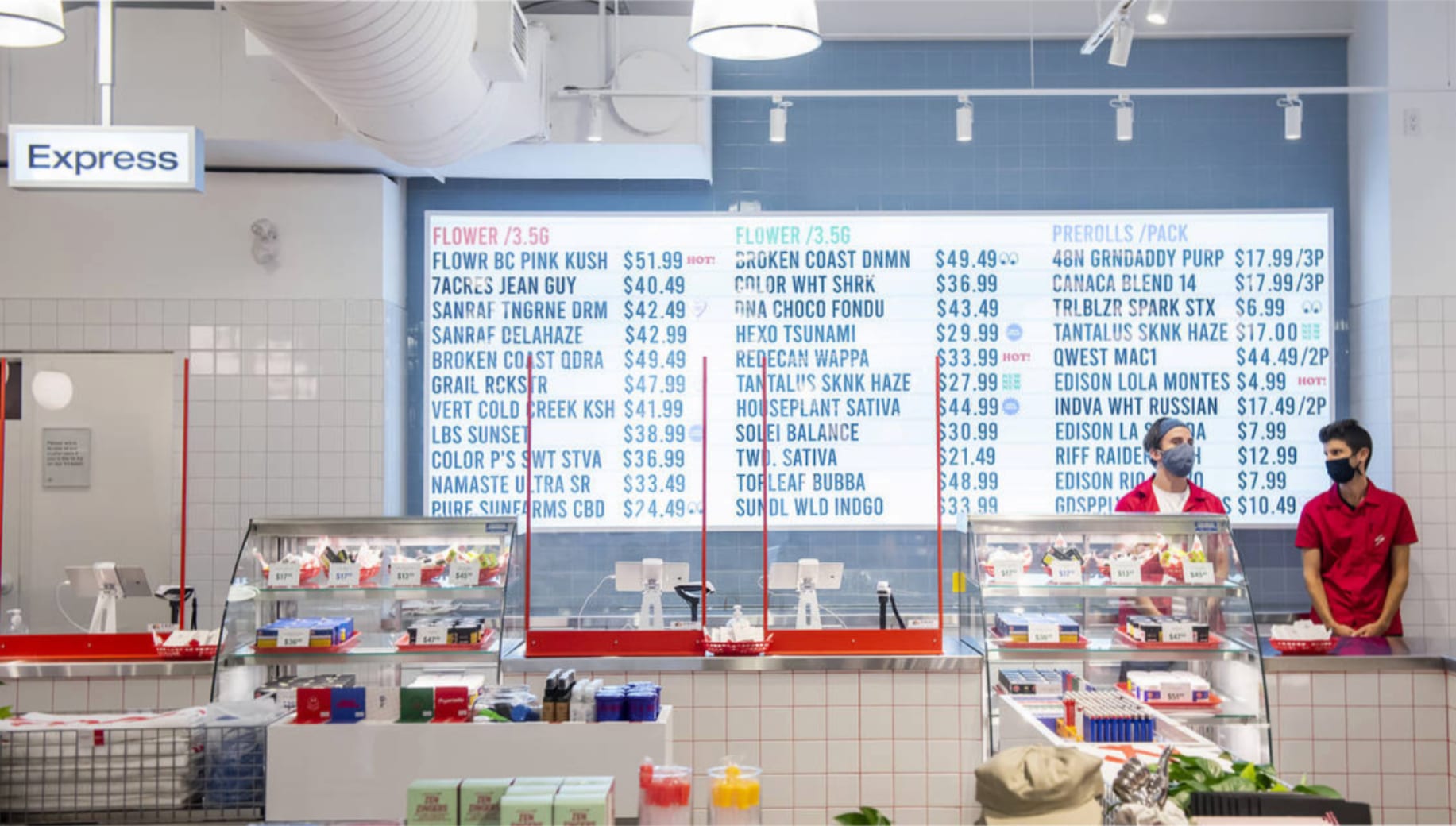 Canada’s largest pot market continued to eat away at illicit sales at the end of 2020, according to the latest quarterly report from the Ontario Cannabis Store.

On Friday, the OCS said legal sales in Ontario represented 40.3 per cent of all cannabis sold in the three months ended Dec. 31, up from 36.2 per cent in the previous quarter.

“It is clear that expanding physical access in unserved or under-served communities is key to continued growth over the long term,” CEO Thomas Haig wrote in the report. 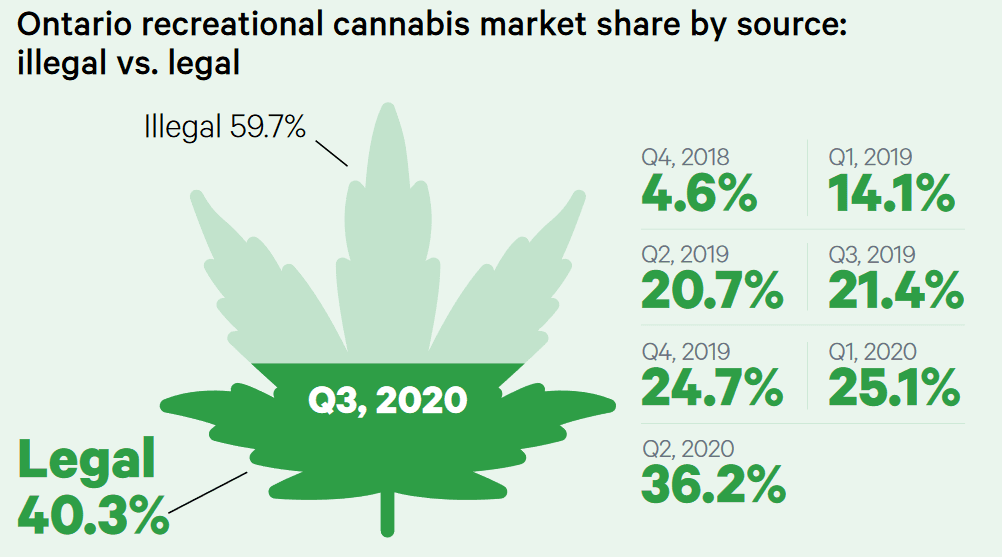 There were 324 legal pot shops open in Ontario at the end of last year, according to the OCS.

The Crown corporation, which manages its own online sales as well as wholesale distribution to private retailers, says it’s continuing to support the Ontario government’s enhanced retail rollout effort in 2021.

With just 100 cannabis stores open by last June, critics have said that a slow rollout was hampering legal sales and boosting the illicit market.

The Alcohol and Gaming Commission of Ontario, the province’s cannabis regulator, said last month that it started upping retail authorizations to 30 per week. With over 430 stores up and running today, Ontario is now on pace to hit 1,000 by the fall.

The OCS says focusing on increasing legal retail access helped Ontario hit a new high of $251 million in legal sales in the fourth quarter, up 23 per cent over the previous quarter.

Despite the major sales growth, the public operator says the province still lags behind the national average of 52 per cent of the legal recreational cannabis market share.

However, industry experts have questioned how total weed spending in the country gets calculated. That’s because Statistics Canada, which the OCS sources, uses self-reported surveys to estimate national illicit cannabis spending.

Another concern for the industry is how the expanded store rollout leading to saturation in some regions. Around 70 Ontario municipalities have refused to allow the opening of cannabis stores, creating clusters in those that permit pot shops.

The average private store made $670,000 between October and December, according to the OCS. That’s down from $2.6 million during the same period a year earlier, as Covid-19 restrictions and growing competition in some concentrated areas hurt retailers.

To keep sales flowing to legal channels, the OCS says it’s continuing to work with licensed producers to lower prices.

The average price per gram of dried flower on OCS.ca hit a reported $6.24 per gram in the fourth quarter, while prices found on the illegal market through analysis of online sellers decreased to $7.76.

The OCS noted consumers that buy weed on its website tend to be significantly more thrifty versus those who purchase in person at private stores, which sold an average of $9.13 per gram.

Value products — priced around $4.75 per gram — sold 4.6 times faster at the OCS.ca than those at the top end of the scale at around $22.25 per gram. But shops sold value products at the same speed as premium products, the report reads.

Ontario continued to have the broadest catalogue of cannabis products in the country, with a reported 1,362 unique shop-keeping-units available last quarter.

The province also led all Canadian jurisdictions with 31.5 per cent of the country’s total legal weed sales.

Dried flower continued to rake in the largest share of sales, accounting for 57.4 per cent of the Ontario market, the OCS says. Vapes and pre-rolls made up the next two spots at 15.7 per cent and 12.5 per cent, respectively.

Pure Sunfarms, the producer owned by vegetable grower Village Farms International Inc. (TSX: VFF) (Nasdaq: VFF), led all companies in dried-flower sales at private stores with a 13 per cent share. Meanwhile, private operator Redecan led in both vape and pre-roll categories at 17 per cent and 15 per cent. 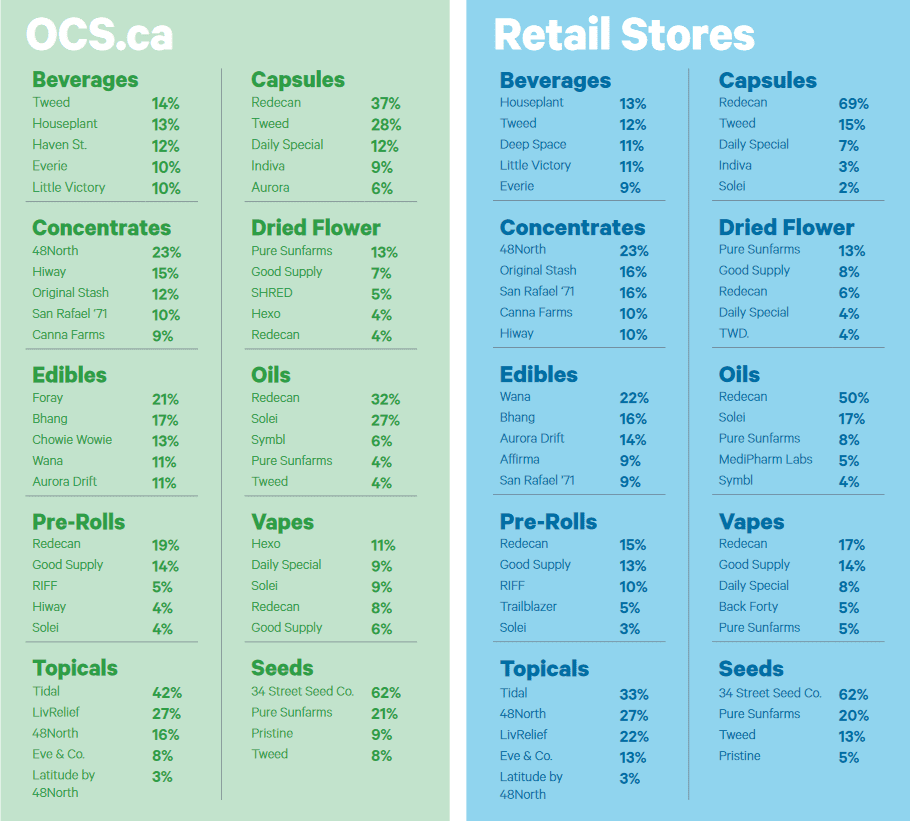 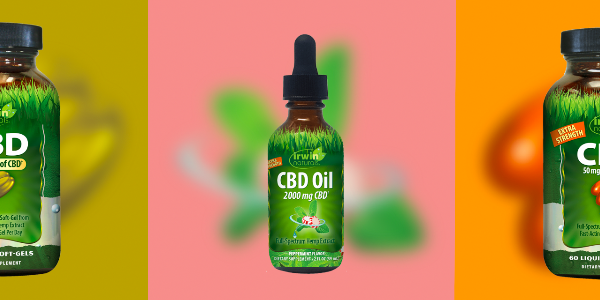