With more pot shops opening their doors and more local products on the shelves, Nova Scotia’s weed sales are on the rise.

On Tuesday, the Nova Scotia Liquor Corporation (NSLC) released its first fiscal quarter results for the period of April 1–July 4.

Compared to the same time last year, cannabis and liquor sales were up 15 per cent overall to $211.8 million, and net earnings reached $71.7 million, up 11.9 per cent.

Overall weed and liquor sales were up 15 per cent to $211.8 million compared to last year. Chart via NSLC

NSLC points out that stores had been closed on Sundays last year and there were pandemic restrictions in place, so overall sales increases can be attributed to 12 extra selling days, increased store hours, and 19 new cannabis stores overall, seven of which opened this quarter.

“The NSLC team has done a tremendous job working hard to responsibly serve our customers, expand the cannabis network, support community-based initiatives and focus on major projects to improve our service offering this quarter,” CEO Greg Hughes said in a statement.

Nova Scotia’s recent year-end results include the Q4 reporting period, but that data is mixed in with the annual totals. However, the province’s Q3 findings for the period of Sept. 28–Dec. 27, 2020 are available.

Relative to that quarter, weed sales have risen 11.3 per cent from $22.2 million.

Across the board, NSLC says local product sales increased “as customers continue to support innovative products offered by our local industry partners.”

Local weed sales shot up 85.2 per cent to $4.9 million since last year, with Nova Scotia cannabis accounting for 19.7 per cent of all sales.

On an annual basis, overall sales of local liquor and weed were up 34.5 per cent to $26.3 million. 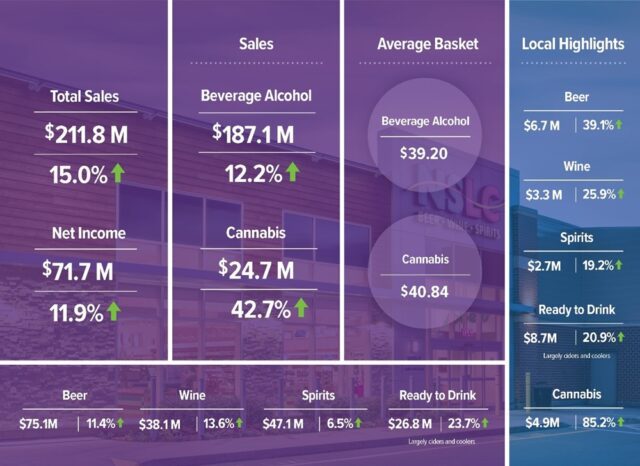 Retail transactions for weed were up 74.4 per cent while the average dollar value of each transaction decreased by 18.2 per cent to $40.84.

The average price per gram dropped 16 per cent to $6.49, which NSLC says makes their prices more competitive with the illicit market. The decrease is a result of customers buying 28-gram pack sizes and large pre-roll packs with a lower price per gram, as well as price reductions.