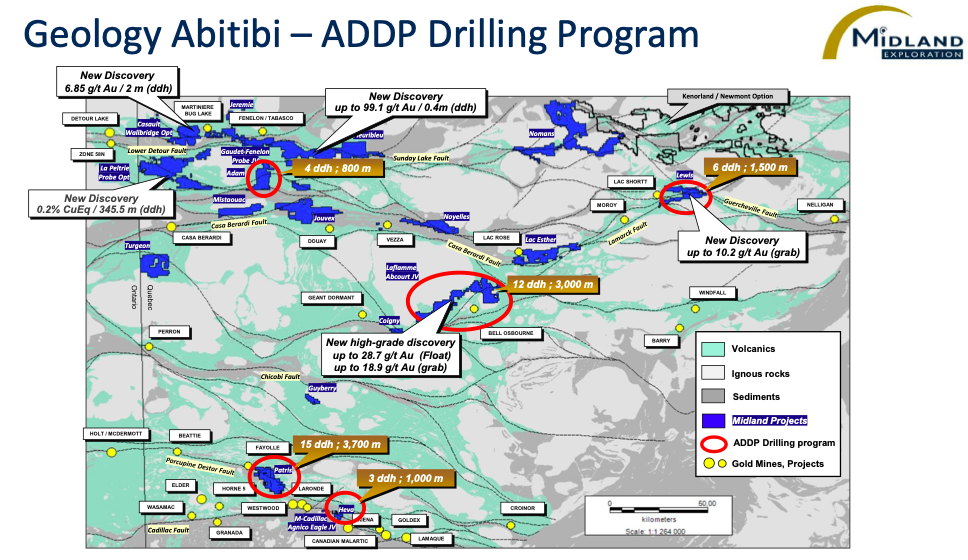 The Abitibi Discovery Drilling Program will test over 40 of the best exploration targets identified throughout the region in recent years through drilling, biogeochemical and geophysical surveys.

The program will be targeting five projects located near major gold-bearing structures in the region such as the Opawica-Guercheville faults, Cadillac-Larder Lake, Lower Detour/Bapst and Destor Porcupine formations. Midland says these large-scale regional structures are important “metallotects” hosting significant gold deposits in the Quebec territory.

The program will mobilize one drill rig constantly for a period between now and March next year on the Lewis, Patris, Adam, Heva and Laflamme JV projects. The Montreal company says logistics and planning are currently in the works for the program so that it will be able to successfully launch this month.

The majority of the targets are orogenic gold deposits but some of Midland’s other gold targets are also correlated with alkaline intrusions that had already been identified on projects such as Patris. The program will also be testing the prime targets located near high-grade gold floats found on the Laflamme JV project yielding up to 28.7 g/t Au.

At the Lewis project, testing a structure containing abnormal gold values intersected over a significant length in channel samples over the past couple of years will be the program’s primary focus.