"Kettling" is a police tactic that boxes people in and prevents them from exiting. Mexican police informally detained a group of cannabis activists for several hours Monday evening. Photo via Plantón420

On Monday evening, a small group of activists were informally and likely unlawfully detained by police on the group’s way to demonstrate for their cannabis rights at the Mexican Supreme Court.

Officers were dispatched by Mexico City’s Secretary of Citizen Security, which is in charge of preserving public order. The police surrounded the protestors and wouldn’t let them leave for several hours.

The encapsulation, as the activists called it, came unexpectedly and none of the approximately 300 cops initially talked to the group nor explained the situation, says Pepe Rivera, leader of Plantón420, which has been demonstrating outside the Senate for months. 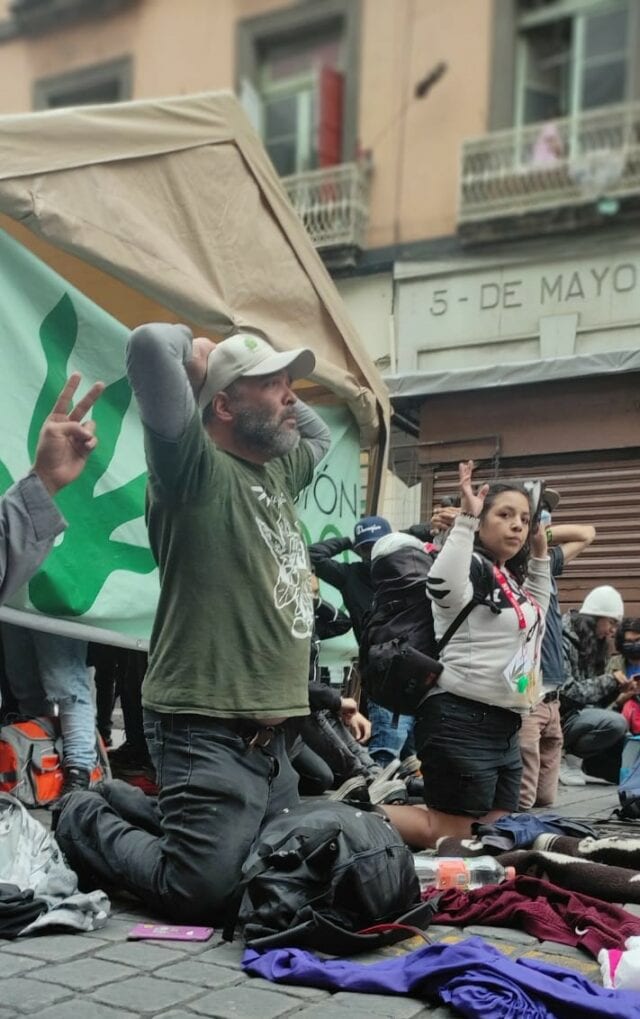 Pepe Rivera (left) and other Plantón420 activists kneeling and raising their hands while being surrounded by police. Photo via Plantón420

While regulating protests is technically unconstitutional in Mexico, encapsulation or “kettling” — a police tactic that boxes people in and prevents them from exiting — is a non-violent protocol that can be used for city safety if law enforcement can justify the action.

However, the Plantón420 demonstrators weren’t acting unlawfully, and Rivera and some of his peers have special protections that allow them to consume cannabis in public without fear of legal repercussion.

Eventually, the Mexican Commission of Human Rights intervened and spoke to city officials about the situation. The commission helped Plantón420 to arrange meetings with the city and Supreme Court representatives on Tuesday morning.

So despite being held for three to four hours, Rivera tells Mugglehead that he considers the interaction a win, as it opened a direct line of negotiation with city officials.

The incident began at around 7 p.m. and the group was let go around 11:15 p.m. with no arrests made. The group then returned to their usual spot by the Senate.

From what Rivera learned following the event, he says the action was probably the result of Plantón420 being mistaken for another, less organized group of weed protestors that has been causing more public disturbance in the city.

He says that Plantón420 will march to the Supreme Court again on June 28, the day that the cannabis vote is scheduled.

The planned demonstration was organized by Plantón420 after the Supreme Court listed on its agenda a discussion and vote to declare the further prohibition of weed as unconstitutional.

“We have been very clear for a year and four months that our way of protesting is to smoke, and to grow weed, because those are human rights that have been recognized by the Supreme Court of Justice,” Rivera said in a video shared with media, adding that Monday’s protest was lawful.

If the prohibition of weed is declared unconstitutional by the Supreme Court, all Mexican citizens would have the right for self-cultivation and personal possession of marijuana without being prosecuted, even in public areas.

Rivera and other Plantón420 activists have an “amparo” to consume and cultivate cannabis. In Mexican law, an amparo is a constitutional appeal granted to an individual or legal entity that contests any federal legislation that they believe violates their fundamental constitutional right.

Rivera and other Plantón420 defenders have also been officially designated by Mexico’s Human Rights Commission as a human rights protector.

If the Supreme Court declares the act of unconstitutionality, all Mexican citizens would receive the same rights as Rivera and the other amparo holders.

In 2018, the court told lawmakers they had a constitutional duty to legalize recreational cannabis.

After three extensions from the Supreme Court, Mexican lawmakers had until April 31 to pass the law but failed to do so.

Given Mexican Congress didn’t pass the cannabis bill on time, the Supreme Court could deem further delay as an act of unconstitutionality and remove the articles of the General Health law prohibiting users to grow and use cannabis publicly.

While Plantón420 says this is the best case scenario, other non-profit organizations such as Mexico Unido Contra la Delincuencia, a non-profit organization aiming to reduce violence and crime, said in a statement last April that declaring an act of unconstitutionality would place all Mexicans in a situation of legal insecurity given the lack of regulatory framework.

As the Plantón420 group was held in place on Monday, local businesses and representatives from the central political district were calling Rivera over the phone and telling them to leave the area, not knowing that the demonstrators were stopped on the way to their destination. 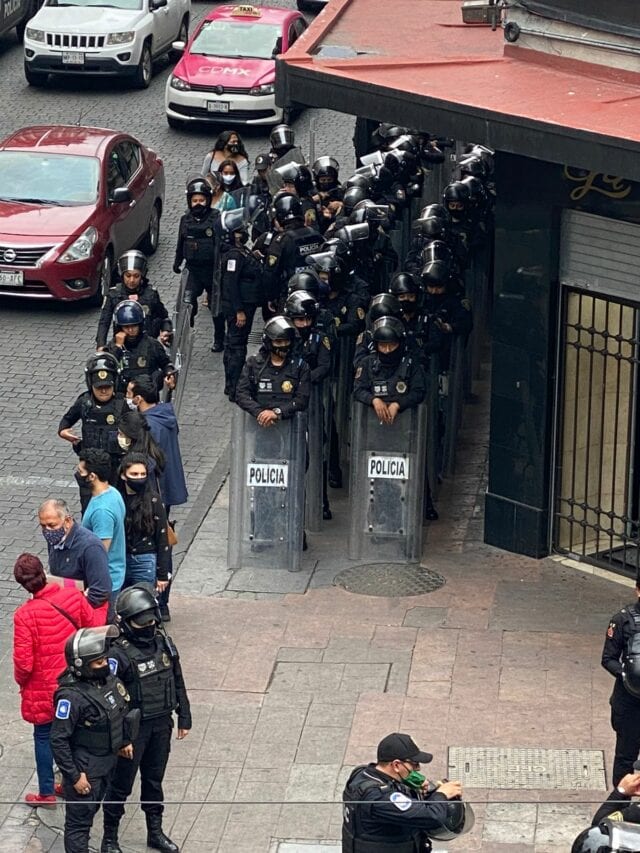 The small group of activists was met with around 300 police officers, which disrupted local businesses. Photo via Plantón420

“I told them we have no interest in staying here,” he explained. “We want to get in front of the Supreme Court at a nearby park where we won’t bother anyone.”

“We are peaceful. We don’t scratch anything. We don’t break windows. We don’t destroy trees,” Rivera said after explaining how some government officials were calling them violent.

In a video Plantón420 shared on social media, Rivera is seen kneeling along with other activists and chanting the group’s protest song.

Rivera, added they will return to their normal spot in front of the Senate but they will be back on June 28 for the Supreme Court vote. He said he will inform local businesses every step of the way and if they are stopped by authorities, shops can attribute it to city officials and not the activists.

A social media post Tuesday morning explained that the discussion with officials led to positive results and the city is now considering negotiating consumption spaces.

“Plantón420 will be the lab to reach more socially accepted norms to consume cannabis in public spaces.”