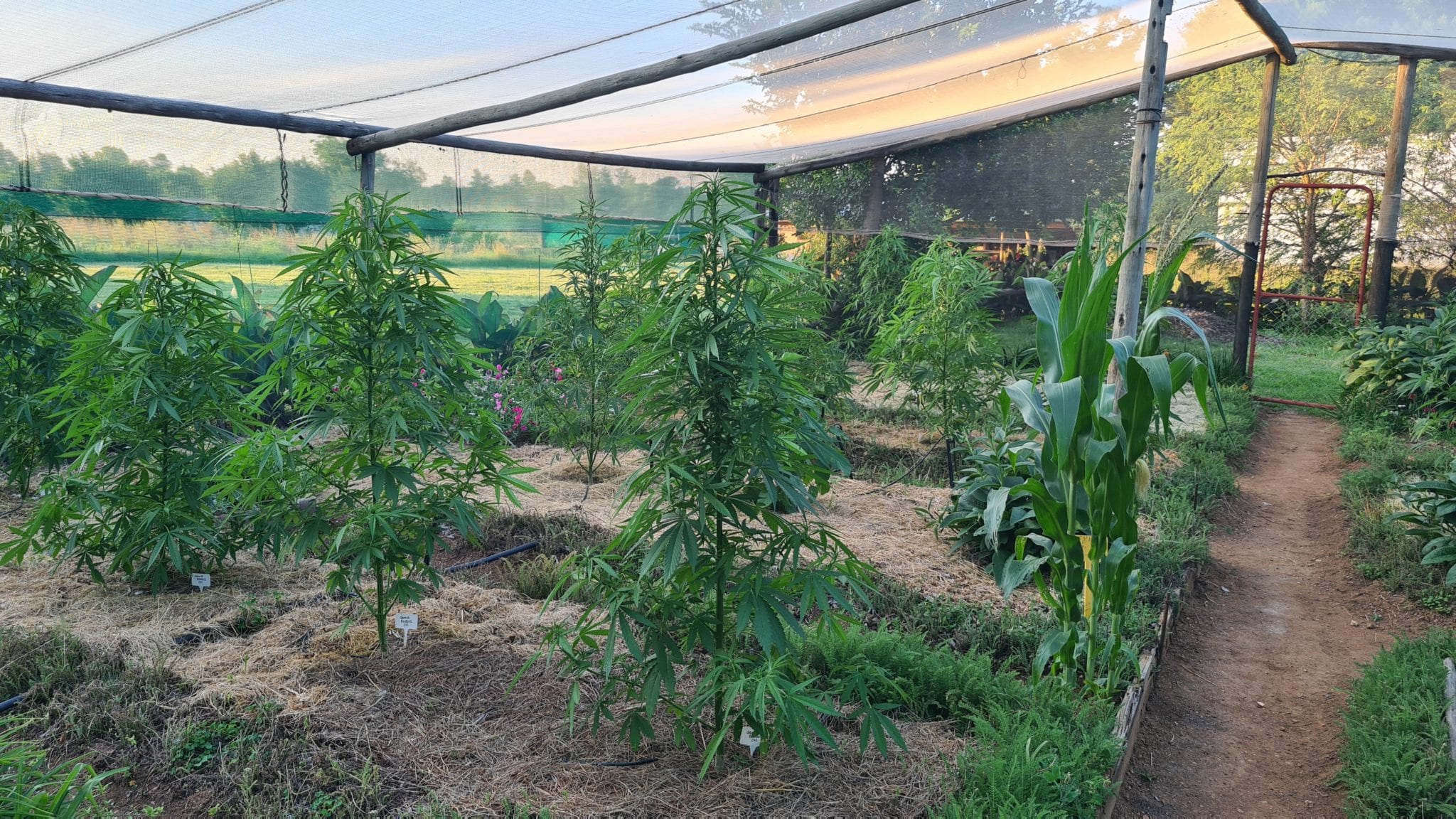 There was a huge cheer when the South African Constitutional Court legalized cannabis use in 2018. Among the cheering crowd were entrepreneurs excited by the prospects of the nation’s massive legacy dagga economy entering an emerging global market.

But the enthusiasm to open weed businesses overlooked the fine print: the judgement only called for legislation to allow consumption in private, not for legal sale.

When the Cannabis for Private Purposes Bill finally opened for public comment last year, it received widespread criticism for ignoring hundreds of years of traditional use, stifling personal freedoms and disregarding the massive monetary potential for the country’s struggling economy.

With arrests and controversy surrounding the legislation, Charl Henning of pro-legalization non-profit Fields of Green for All makes his frustrations clear.

“We are sick of hearing about the massive potential of a legal industry, while on the ground, the government is still putting people in cages for a medicinal plant with the help of our massively corrupt police force,” he says. “There is already a massive unregulated, untaxed kasinomic market with close to 900,000 dagga farmers in South Africa.”

The term kasinomics was popularized by author GG Alcock in his book KasiNomics: African Informal Economies and the People Who Inhabit Them. 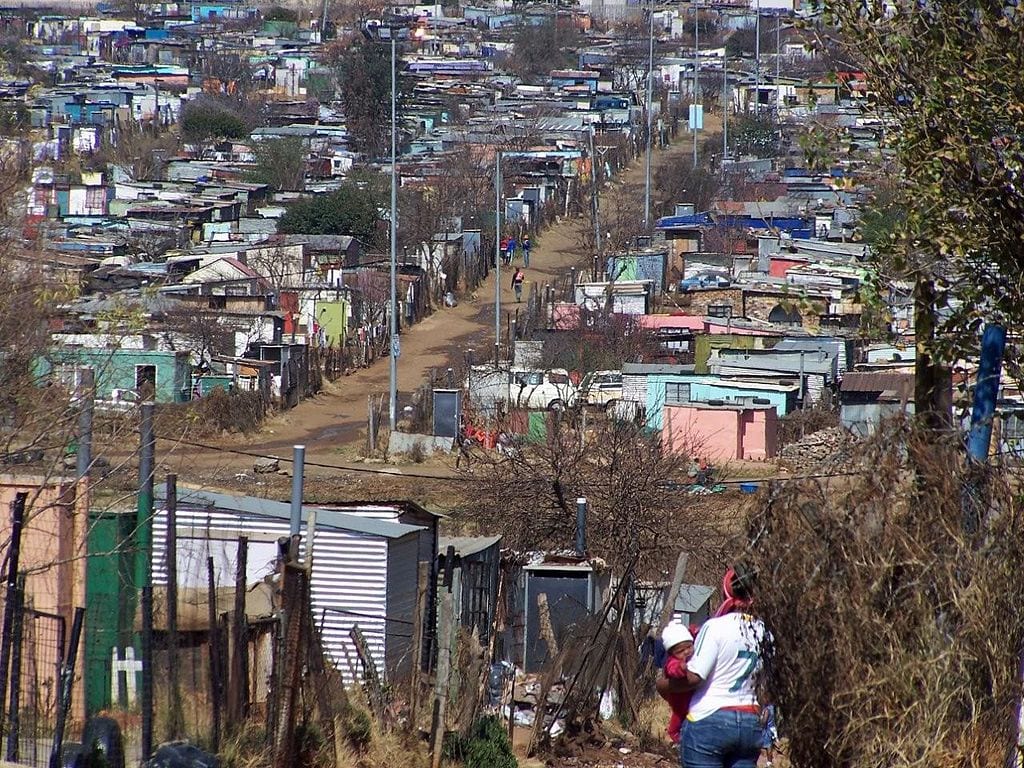 Activists point to the huge economic potential currently being held back in South Africa’s unregulated economies. Soweto is a majority Black township of 1.2 million, located south of Johannesburg. It was at the forefront of anti-apartheid resistance in the late 1970s and 1980s. While Soweto is now home to trendy suburbs, government-funded projects to lift impoverished areas have largely failed. The township hosted the FIFA World Cup in 2010. Public domain image

Prohibition Partners estimates that the domestic market, excluding CBD products, can grow to R27 billion (US$1.85 billion) by 2023. With South Africa’s economy already contracting in the years before the pandemic, it could desperately use the economic growth and job creation that a formal cannabis industry would offer.

At the end of March 2020, Moody’s was the final ratings agency to downgrade South Africa’s credit rating to junk status.

In 2019, South Africa’s unemployment rate was 29.1 per cent. By the end of last year, it had risen to 32.5 percent. According to Stats SA data, if the unemployment rate includes those discouraged from seeking work, the figure increases to 42.6 per cent.

Fields of Green for All doesn’t support the bill in its current form. Its members believe lawmakers lack an understanding and appreciation for the plant. In their eyes, the bill is vindictive and only seeks to “fill government coffers with fines instead of taxes at the expense of those that have been fighting to free the plant in the courts for years.”

Fields of Green for All wants inclusive legislation that leans on science and evidence. The organization advocates for non-punitive regulation that recognizes the commercial potential of cannabis and respects cultural and religious practices.

Its members have collected data, opinions and best practices to compile a manifesto called Cannabis in South Africa: The People’s Plant. The manifesto details pathway for legislation, policy, regulation, socialization and industrialization of dagga.

“The future will never arrive unless the government will have a change of heart and adopt scientifically sound, evidence-based policy on cannabis,” Henning says. “We cannot regulate something that is safer than both alcohol and cigarettes in a harsher manner.” 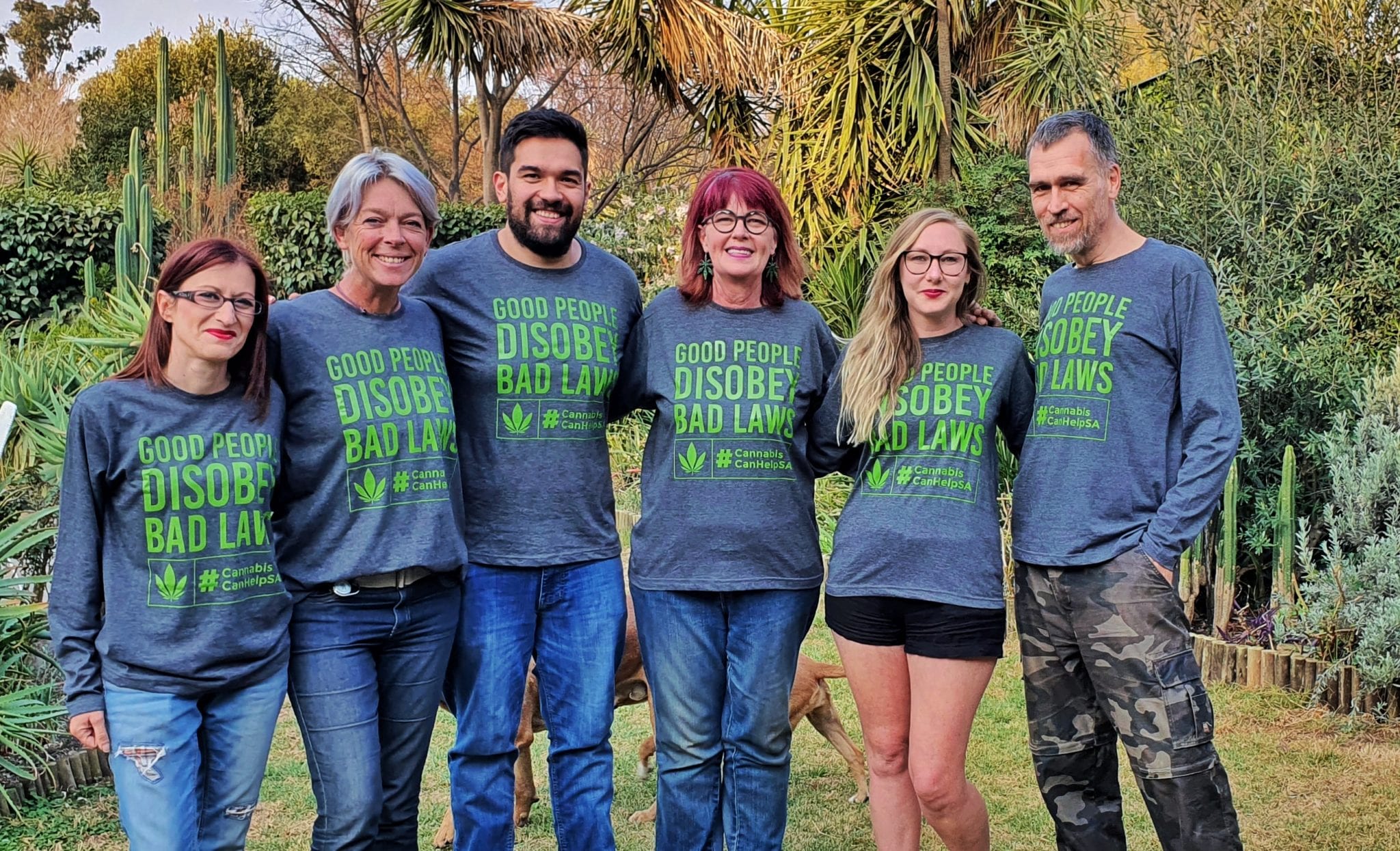 Co-founder Myrtle Clarke (third from right), Robyn Cameron (second from right) and Charl Henning (far right) and other team members of activist group Fields of Green for All. Submitted photo

Opposition parties have supported bills to legalize medical cannabis in the past. Mario Oriani-Ambrosini, a member of the Inkatha Freedom Party (IFP), drew from his experience as a cancer patient to draft the Medical Innovation Bill to regulate medicinal cannabis.

During the 2014 state of the nation address, he pleaded with President Jacob Zuma emphasizing that, “I am here today not to oppose you, but to plea with you to provide a voice to the many people who are in my condition, who do not have a voice.”

“Cancer is the greatest pandemic this country is facing. People are dying because of bad policies and because of bad laws, which we can change. There are available cancer treatments which are not made available from a legal viewpoint, and I stand here as the expression of that problem.”

He went on to explain that he had to resort to illegal soda bicarbonate treatments and dagga in South Africa. It was either that or, “I would be packed with morphine and would not be able to speak with you, Mr. President,” he said.

He died shortly after introducing the bill in 2014. Honouring his efforts, the IFP brought the bill to the parliamentary floor. The Democratic Alliance Party lent their support to the bill.

In response, the Department of Health and sister agencies adopted regulations and made promises to allow citizens to buy cannabis for medical purposes and to conduct research. It said it would conduct discussions with departments of trade, industry, agriculture and health on hemp production. 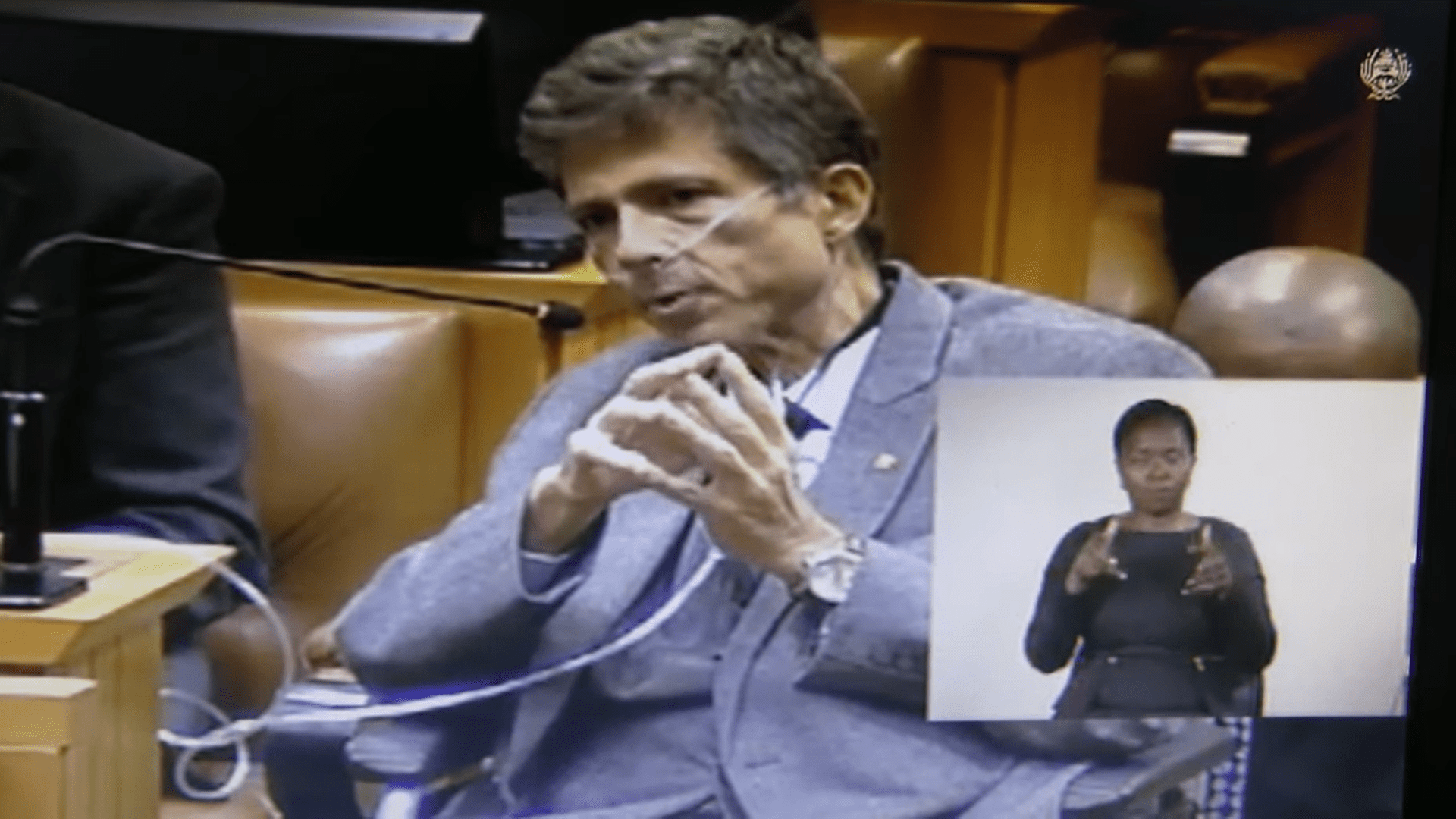 The IFP was satisfied with the government’s efforts to adapt existing health laws and regulations, so they put the proposed bill to rest. But today, medical cannabis is hard to come by in reality, and not everyone has the green thumb to grow quality product at home.

Although the Constitutional Court forced the African National Congress government to legalize cannabis for personal use, two of its senior politicians have come out to support more widespread legalization.

Finance Minister Tito Mboweni has been a supporter of the plant for recreational and economic reasons. He’s even tweeted pictures of his personal-use plants on his farm as an act of defiance against regulators last January.

Later in February, President Cyril Ramaphosa gave his State of the Nation Address and said: “This year, we will open up and regulate the commercial use of hemp products, providing opportunities for small-scale farmers, and formulate policy on the use of cannabis products for medicinal purposes, to build this industry in line with global trends. The regulatory steps will soon be announced by the relevant ministers”.

Public comments on the cannabis bill have now closed, but hasn’t yet gone through deliberations and public hearings. The public hearings aren’t on the agenda, so the next phase of the proposed legislation is unclear.

Regarding the tabled cannabis bill, van Schalkwyk disagrees with it as it stands. He wants the government to conduct more research and consultations with organizations like Fields of Green for All, “as they have already come up with a well thought out and intelligent way in which our market can grow and be built.”

The misunderstanding about the commercialization of cannabis has led some entrepreneurs to operate in the dark, whether they know it or not. And many aware of the legal situation try to find workarounds.

Some respect the law, but others are chancers trying to fool the public with obvious loopholes, Henning explains.

“Any trade in cannabis in South Africa is still illegal, except for some imported CBD and hemp products,” he explains.

Fields of Green for All was founded by Julian Stobbs and Myrtle Clarke, who are widely known in South Africa as the Dagga Couple. Their organization provides legal assistance to citizens arrested on cannabis charges. It’s expanded to include lobbying efforts and educational programs for medical use.

They even work with local universities to strategize routes to cannabis entrepreneurship while avoiding legal punishment.

The Dagga Couple assisted in the constitutional court case that led to the personal-use judgment by offering information and expertise on cannabis. They have an ongoing GoFundMe campaign that seeks to fund Fields of Green operations and keep the farm started by the couple safe. During a house robbery last year, Stobbs was murdered in his sleep.

One operation that tried to skirt the law was Canapax, founded by Russell de Beer. De Beer reasoned that he could sell cannabis as medicine because he’s a traditional healer operating under the Traditional Health Practitioners Act. He had roped in other entrepreneurs who paid R25,000 to open a Canapax store. The fee covers a short course to become a “qualified traditional healer,” and Russell provided the products to sell. 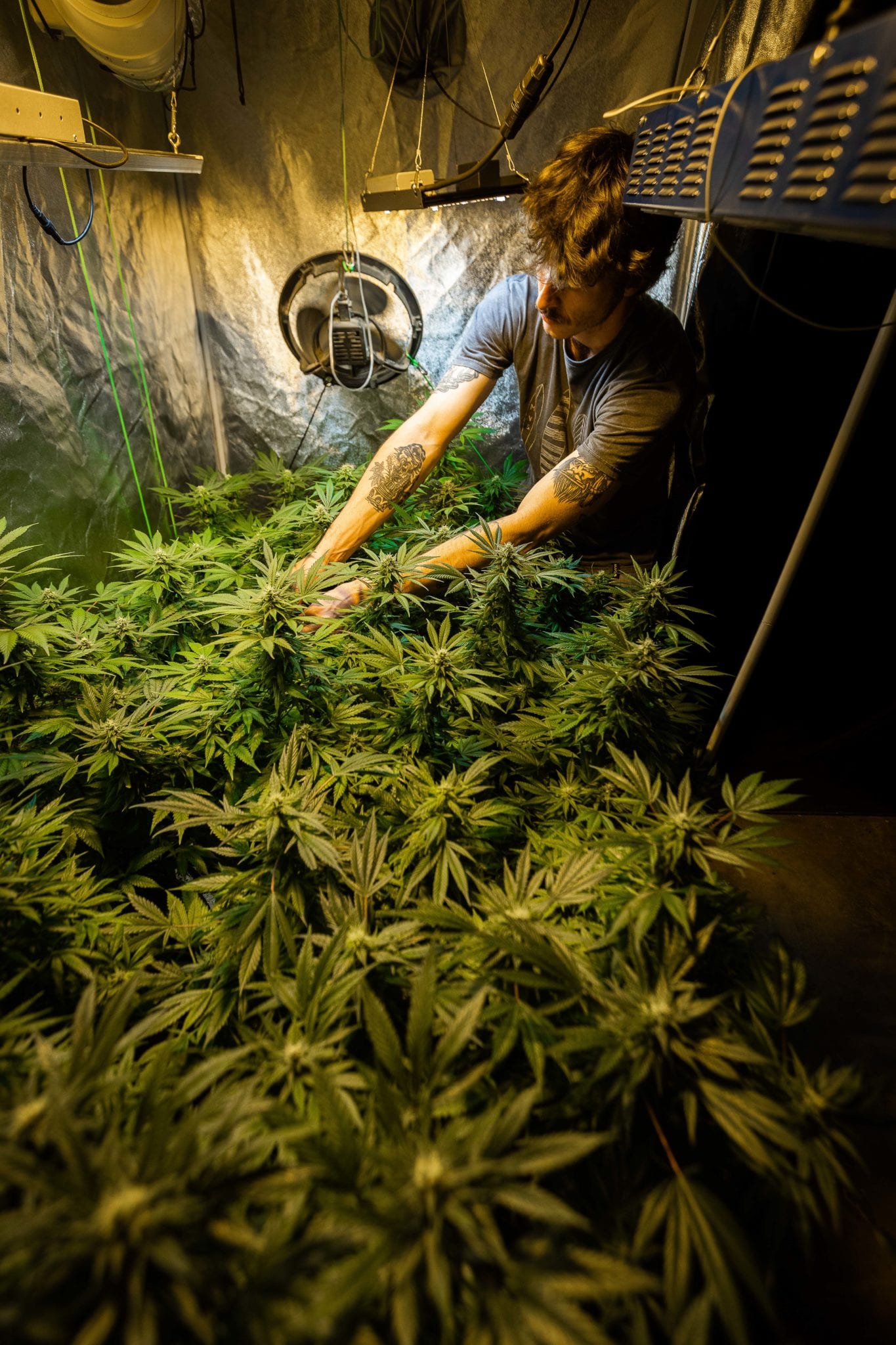 Marijuana SA head of operations Dean van Schalkwyk tending to an indoor grow. His company provides supplies and education to South Africans wanting to cultivate their own cannabis. Submitted photo

The South African Police (SAP) disagreed with his reasoning. In November 2019, they arrested Russell and closed the Canapax shops. The SAP and the South African Health Products Regulatory Authority (SAHPRA) released a joint statement that mentioned no names but could easily apply to entrepreneurs like Russell. They made it clear that selling cannabis is still illegal in South Africa.

“These illegal businesses, purporting to be operating legally in terms of the Traditional Health Practitioners Act (No. 22 of 2007), are also being sold to members of the public as franchises authorized to deal in cannabis and cannabis-related products,” reads the statement. “The Traditional Health Practitioners Act does not create a mechanism to sell cannabis and cannabis-related products that are not exempted in terms of the Medicines Act.”

On the other hand, there are businesses like Marijuana SA, an online store. It stays on the legal side by supplying equipment and education to grow its plants. Co-founder van Schalkwyk says this is their growth strategy while waiting for legal avenues to further expand operations.

Other entrepreneurs have tried to leverage privacy rights mentioned in the ruling by creating private grow clubs. These clubs take monthly membership fees and seeds from members then lease out space in a garden to grow them into plants. Then club experts harvest the plant, dry and deliver the finished product back to the member.

The Haze Club ran such an operation, but authorities arrested its founders last October. The club’s defence is that they lease out a plot and provide a gardening service. Their case is yet to appear before the court, but the ruling could have significant implications for the industry.