Indiva products are the top selling edibles in Canada. Image via Indiva

With strong brands in the category, Indiva Limited (TSXV: NDVA) continues to expand its dominance of the legal Canadian edibles sector.

On Tuesday, Ontario-based Indiva, which owns cannabis edibles brands Bhang and Wana Sour Gummies, reported its second-quarter earnings for the three months ended June 30 with net revenue of $9 million, a 45.9-per-cent increase from the previous quarter.

The increase is attributed to higher sales of its popular edibles including Wana Sour Gummies with a 38-per-cent total category share, and Bhang Chocolate, the top-selling chocolate edible in Canada. Edible sales represented 93 per cent of net revenue in the quarter.

According to retail analytics platform Hifyre, Invida’s provincial market share from edibles is strongest in Alberta with 59-per-cent market share, followed by Manitoba with 53 per cent, British Columbia with 50 per cent, Ontario with 48 per cent and Saskatchewan with 32 per cent.

Indiva says it now controls 50 per cent of the edible category overall, up from 48 per cent last quarter. 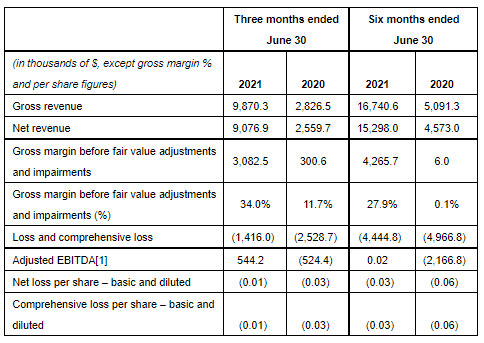 Net revenue from edibles grew to $8.43 million from $5.53 million, a 52 per cent increase from the first quarter.

Indiva sold 52 million milligrams of distillate in its edible products, a 73-per-cent increase over the 30 million sold in the previous quarter. The cost of the distillate decreased from $0.038 per milligram to $0.02.

“Becoming a top 10 ranked licensed producer nationally by dollar share and top three measured by units, and doing so by driving organic growth rather than through acquisition, is a testament to the talent, dedication and hard work of the entire Indiva team.” president Niel Marotta said in a statement.

The company reported adjusted earnings before interest, taxes, depreciation and amortization of $0.54 million.

Total operating expenses were $3 million up from $2.2 million, a 39.5-per-cent increase. This was attributed to higher marketing and sales commissions driven by higher sales volumes, as well as higher public company costs.

At the end of the quarter, Indiva reported a cash balance $3.4 million, decreasing 52.3 per cent.

Comprehensive loss dropped 53 per cent to $1.4 million from $3 million.

Company stock decreased by 3.57 per cent on Tuesday to $0.40 on the TSX Venture Exchange.

The company recently released its Bhang Caramel Mocha Milk Chocolate, as well as its Bhang Cookies and Cream chocolate. In the coming months, it will be releasing multi-pack Wana gummies, as well as its Slow Ride Bakery cookies, its first baked good on the market.

During the quarter, Indiva released its Wana Quick fast-acting gummies in six provinces and one territory. Wana gummies were also listed at Medical Cannabis by Shoppers for medical users.