Canadian cannabis producer Indiva Limited (TSXV: NDVA) (OTCQX: NDVAF) has boosted its revenue once more thanks to its gummies and chocolate sales.

On Wednesday, the leading edible producer released its fourth quarter and yearly financial statements ended Dec. 31 this year and reported an increase in net revenue of 18 per cent to $9.5 million from $7.7 million in the previous quarter.

The increase is attributed to the company’s success in edible sales which contributed $8.2 million in this quarter up 19 per cent from $6.9 million in the last quarter. Edible product sales represent 87 per cent of net revenue in Q4 2021.

Adjusted earnings before interest, taxes and depreciation declined in Q4 dropping to a negative $490,000 from a profit of $170,000 in the last quarter.  The company closed the quarter with cash by the end of the quarter totalling $2.5 million, a decrease of around 4 per cent from $2.6 million in Q3.

For the quarter, the company spent close to $5 million on marketing and sales operations from $1.1 million in the last quarter.

The company saw a quarterly net loss and comprehensive loss of negative $15 million from negative $6.4 million in the last quarter.

Indiva explained that $1 million in impairment charges were because of a write-off of aged finished goods and bulk cannabis products aging as well as outdated packaging.

Company stock stayed flat on Wednesday at C$0.25 on the Canadian Ventures Exchange.

Indiva’s yearly net revenue was also driven by higher sales of edibles such as Wana Sour Gummies and Bhang chocolates. By the end of the year, net revenue totalled $32.4 million which is a 122 per cent year-over-year increase from $14.7 million in 2020.

Operating expenses for the year were $12.4 million up by around 55 per cent from $8 million year-over-year. Total cash by the end of period was greatly increased to $2.5 million from $314,000 in the previous fiscal year. 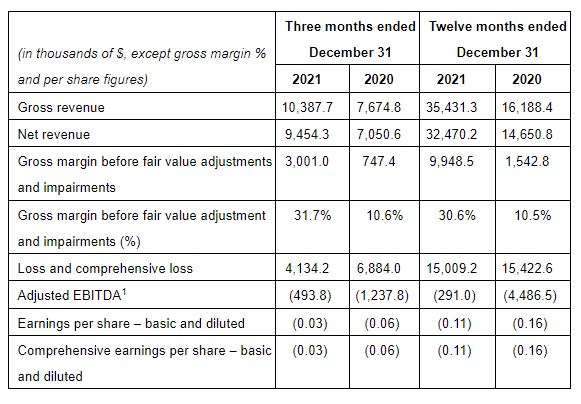 Indiva CEO Niel Marotta said in a statement that as one of the leaders in the edibles category in Canada the company aims to expand to other international markets.

“While in the short-term, licensing deals remain our core revenue contributor, creating the backdrop for our current success, Indiva’s future lies in innovating better products, while continuing to delight our clients and customers,” Marotta said.

According to data analytics firm Hifyre Inc. which is a subsidiary of Fire & Flower Holdings Corp. (TSX: FAF) (OTCQX: FFLWF), Indiva is one of the market share leaders in edibles category in 2021.

Wana produces and sells edible gummies in Colorado and licenses its intellectual property to partners for producing Wana-branded gummies in California, Arizona, Illinois, Michigan, Florida and across Canada via Indiva.

Indiva now distributes products in the recreational channel to all 13 provinces and territories in Canada.