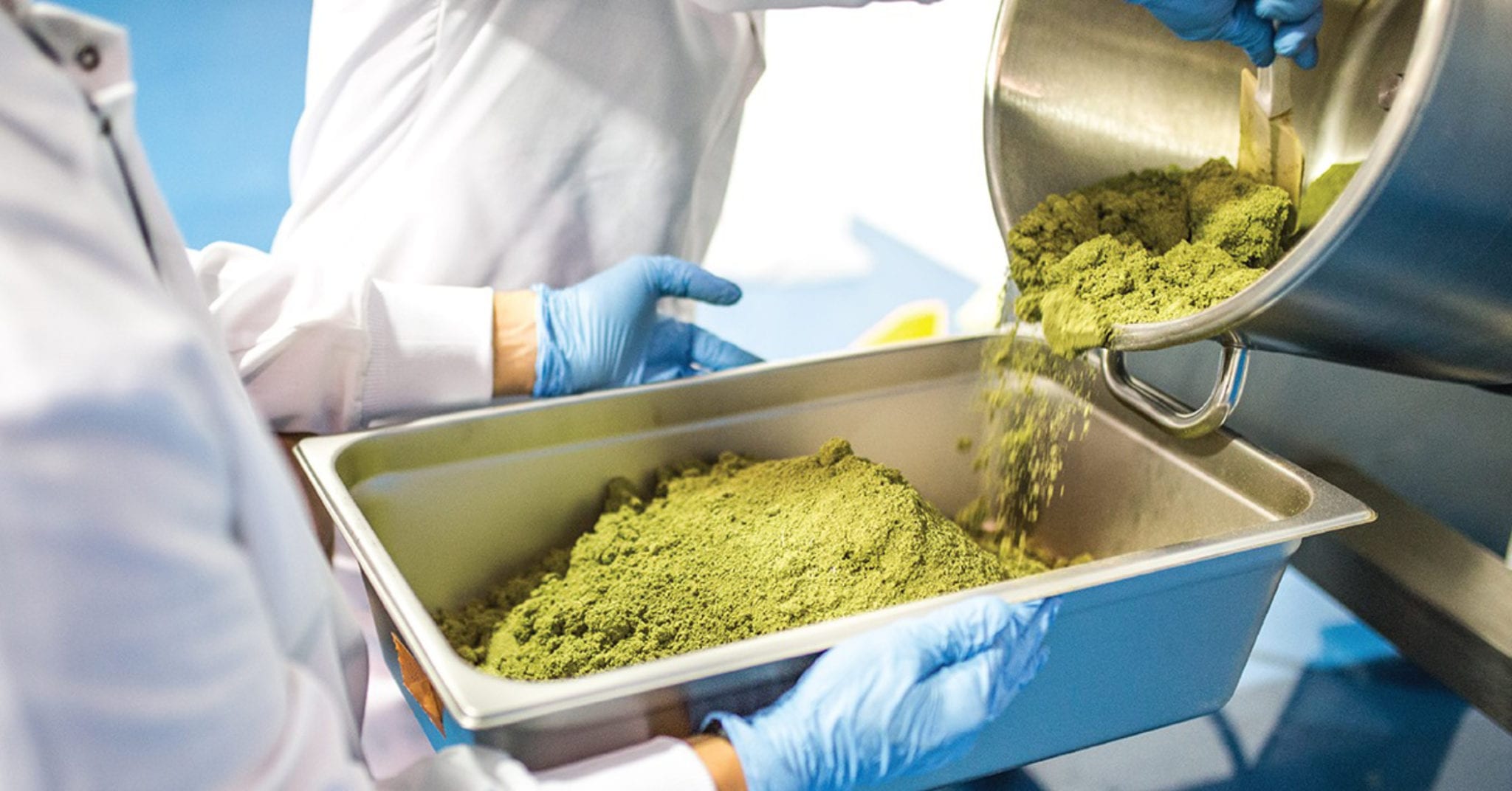 Leading cannabis extractors, retailers and frontier psychedelic firms are looking to drum up precious capital amid the most extensive economic downturn of global markets to date.

As under-employed folks sparked up around the globe for the famous stoner holiday, executives and investors gathered online Monday for the KCSA Cannabis and Psychedelic Investor Conference.

Visuals of people in business attire ambling outside a non-descript conference building decorated the website with an uncanny valley sense of corporate normalcy. Logistically, the conference itself ran smoothly with clear notifications for upcoming presentations, and an easy portal to follow slide decks and type questions to the presenters.

Major themes that prevailed through the event ran from the promising future of extraction for global medical and recreational markets, and Herculean uphill battle required to extract investment dollars for early operators in the psychedelic space.

From an immediate-term investment point of view, the most exciting company to present was Valens, who posted the strongest earnings in the Canadian cannabis sector in their quarterly report last week.

With an adjusted EBITDA of $14.3 million, their reported earnings are the cream of the crop in the world’s most developed legal cannabis economy. Other companies to report recent profitability were mega-producer Aphria, Inc. (TSX: APHA) and MediPharm.

Speaking on behalf of Valens was VP of strategy and investments Everett Knight. The youthful executive has been with the company since January 2019 and was previously a portfolio manager for the small cap and cannabis fund at Matco Financial.

To Knight and Matco, cannabis is an ingredient. 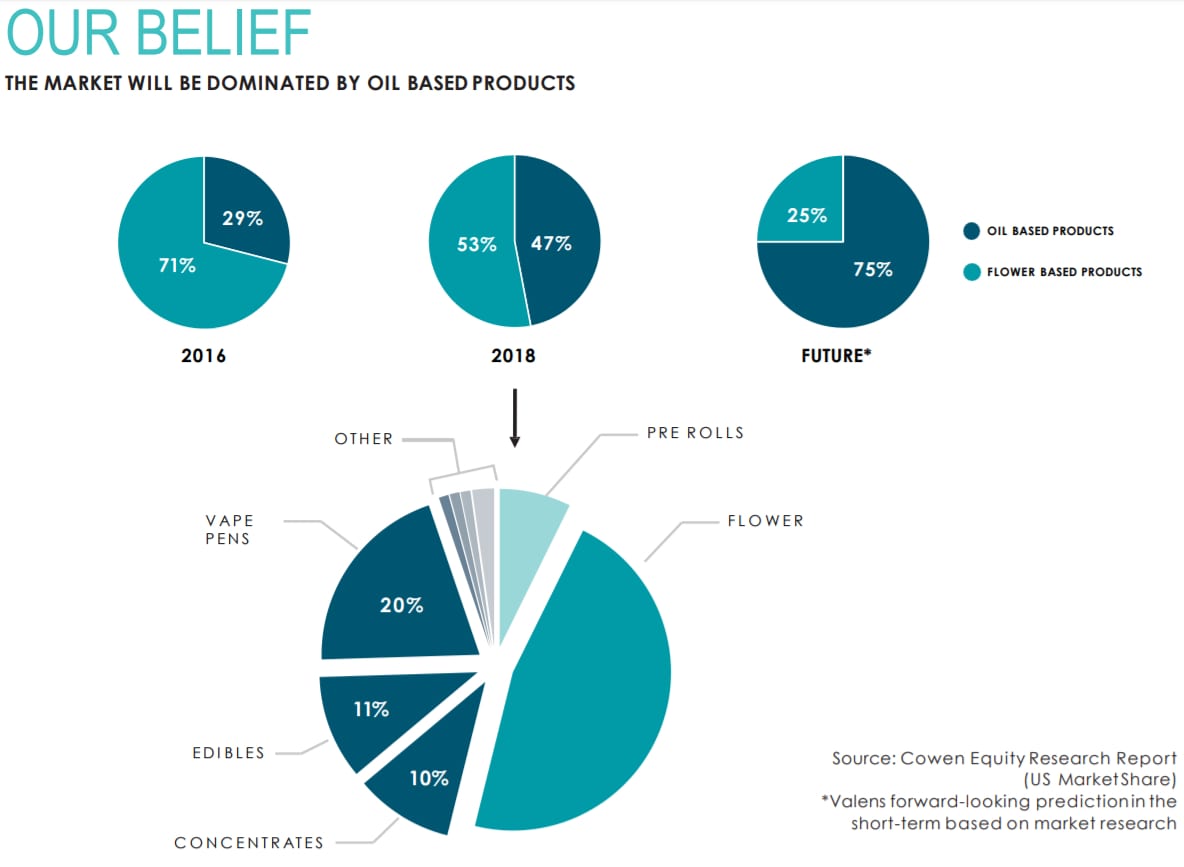 So when Knight was first eyeing the emerging legal weed industry, he said he came across extraction when we was looking for ancillary companies with margin profiles.

“What we really liked about it back then was the EBITDA margins and the EBITDA stability of margins over the long term,” Knight said.

That’s when he came across CEO Tyler Robson and the rest of Valens, saying he was blown away by the proprietary technology and knowledge base.

Matco started out as a small investor and is now the largest institutional investor in the company. Knight said he liked it so much that he joined the business.

The future is oil, according to Knight, who showed predictions that extracts will dominate the market share of products in weed space.

Concentrates have been gaining market share in both the Canadian and legal U.S. markets. BDS Analytics predicts that U.S. concentrate sales will catch up to flower by 2022, with 36 per cent of the overall market share a piece.

North of the border, recent data from Headset showed cannabis 2.0 sales rapidly ramping up in their first four months of legalization, accounting now for almost 15 per cent of the market share. 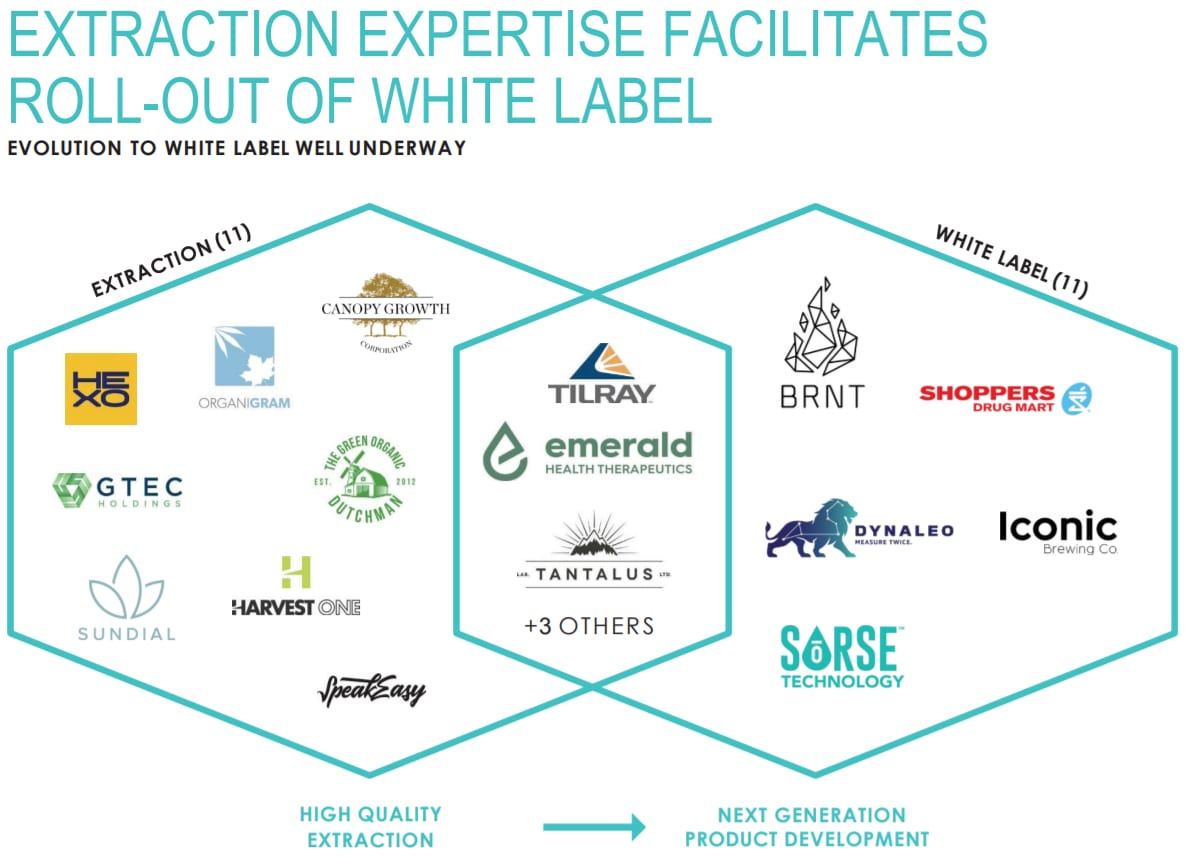 Valens has a wide client base of licensed weed producers and branded companies. Chart via Valens

Valens’s wide variety of extraction techniques has made it the top pick for third-party extraction services in the country.

“One of the other biggest competitive advantages we have is a very diversified customer base,” Knight said. “No customer, we forecast for 2020, will be over 10 per cent of our revenues.”

The core of the Valens client base is licensed producers, but Knight noted growth on their branded customer side, which included a white label deal with Shoppers Drug Mart.

Knight says he expects revenues from white label branded customers to surpass similar deals with LPs in the next quarter.

Tablula Rasa on the need for education in the psychedelic space

While the stoke on the psychedelic movement remains consistently high, it looks like thought leaders in the sector are finally realizing just how big the uphill battle is to bring its products to the mainstream.

That’s why companies like Tabula Rasa Ventures are focusing the majority of their business model on building platforms to educate potential investors about psychedelic companies and the types of research that drive economic opportunities. 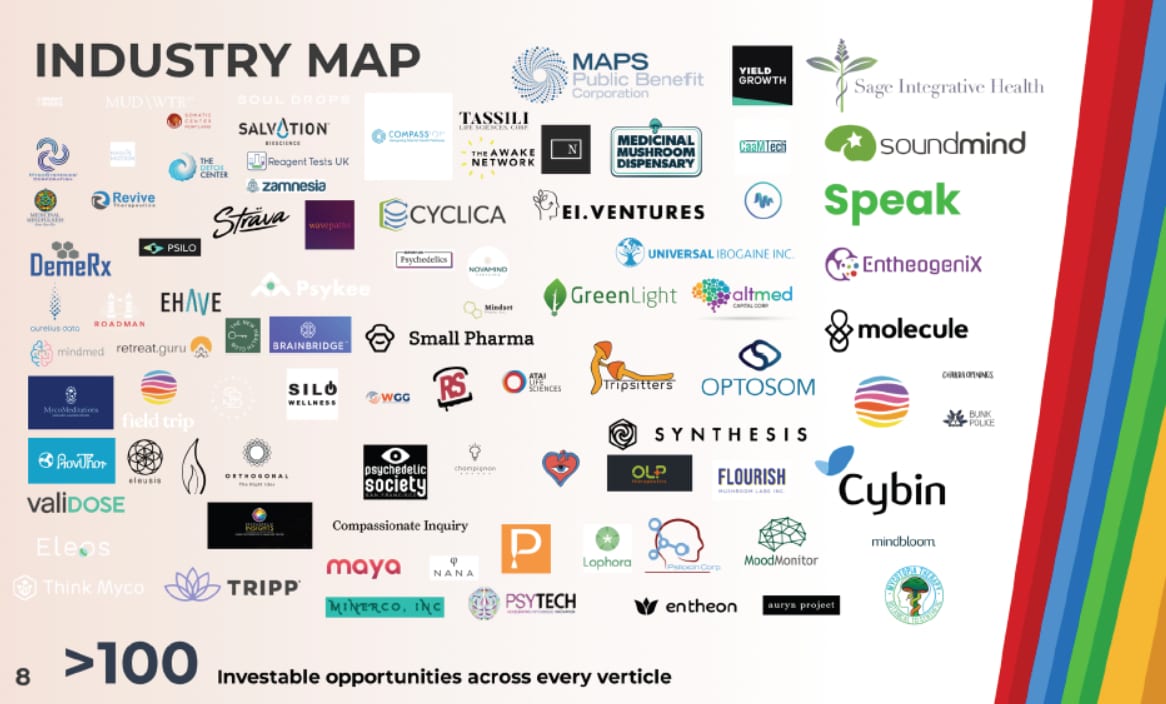 Many companies have popped up to capitalize on the promise of psychedelics. Slide image via Tabula Rasa

The business model behind Tabula Rasa involves creating a network of companies and other players in the space via a series of platforms. These platforms, according to the company, involve sharing ideas, learning about business opportunities and raising capital.

The research pillar, called Fraqtal, Hazan explained as featuring more than 100 companies identified by Tabula Rasa with write-ups about each one and more information at higher membership tiers.

“This is a platform that allows anyone to do research on the psychedelic ecosystem,” Hazan said. “And allows for us to be able to capture the data and analyze what the opportunities are that people are interested in.” 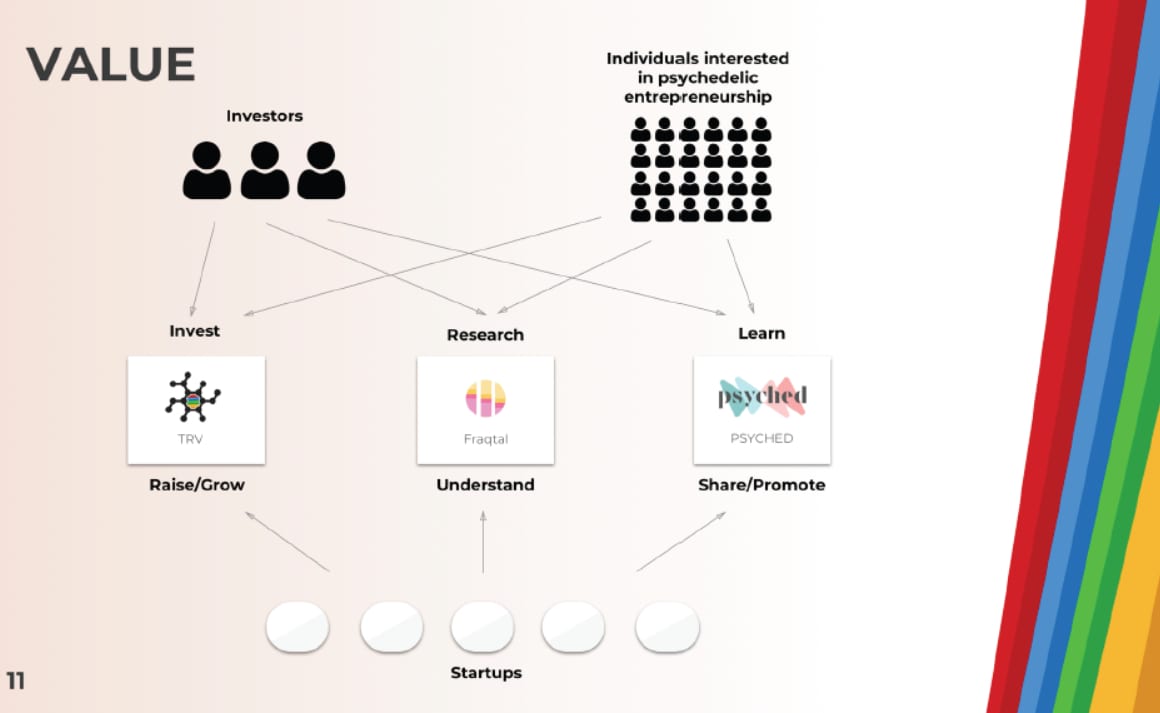 The outline of Tabula Rasa’s three-pillared business model. Slide via the company

At a more granular level, Hazan said the platform allows his team to find out what parts of companies people are interested in learning more about.

Hazan — answering a question from the online audience — said psychedelic media companies will be seeing the most early returns.

Hazan concluded his presentation by sharing the belief from within the community that humanity’s favourite trippy substances will have a worldwide healing role to play in our current crisis.

“There’s this belief that we’re really experiencing now is very much its own trauma, its own global trauma, and that psychedelics are going to be able to help us through that communally.”