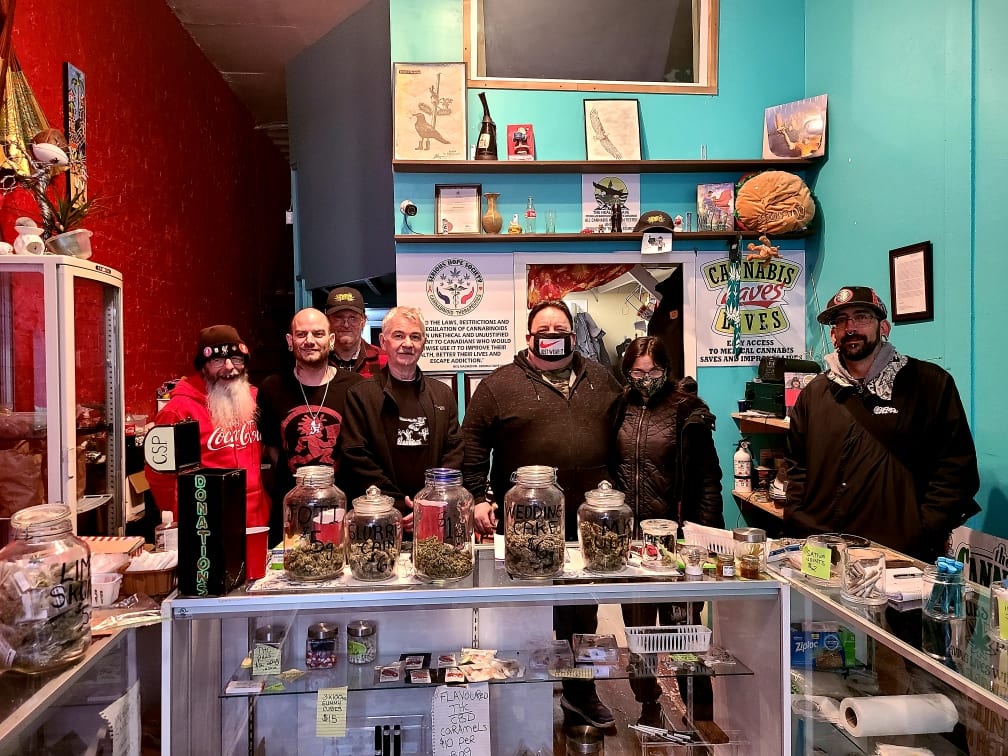 People at high risk of overdose on Vancouver’s Downtown Eastside could be losing access to a harm-reduction initiative that hands out free cannabis as an alternative to more dangerous drugs.

The Serious Hope Society, Healing Wave and Cannabis Substitution Project are being evicted from their current storefront at 157 East Cordova St. after losing a court case with their landlord.

The Serious Hope Society operates outside of the law, but does so to save lives during the ongoing overdose crisis, explains founder Neil Magnuson. His efforts have gained him the support of researchers and city officials.

The Cannabis Substitution Project hands out free cannabis to a couple hundred people who use it as an alternative to harmful street drugs that have claimed far more lives in British Columbia this year than Covid-19. 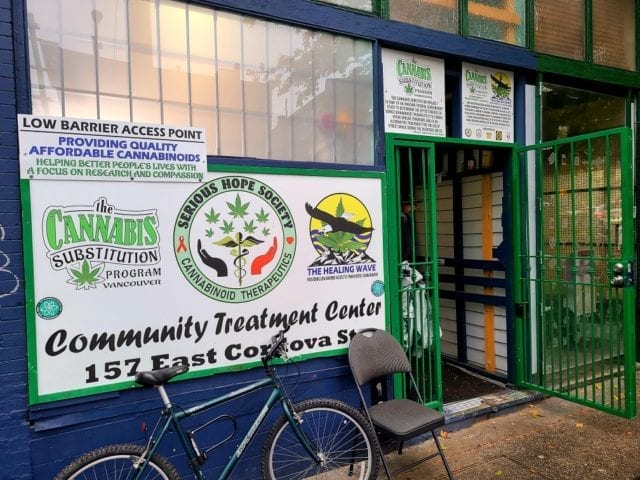 However, as the CSP’s harm-reduction efforts break almost every cannabis law that exists under Canada’s current system, Magnuson’s landlord was told by the City of Vancouver to evict the society or be prosecuted himself.

The society went before the B.C. Supreme Court last week to ask for more time. Magnuson was expecting the judge to grant them a six-month adjournment — instead they got seven days to vacate from the ruling on Friday.

Over the phone Magnuson’s voice is hoarse; he’s shocked and horrified by the ruling.

“We can’t — can’t not help these people who are counting on us and have been for three-and-a-half years,” he says.

Magnuson says the judge told his lawyer, John Conroy, they were in court with “unclean hands.”

“That was probably the main basis for his cruel decision — that we’ve been breaking laws to do what we’ve been doing,” Magnuson says. “But that’s what you have to do to save people. If my hands are dirty it’s because that’s what that kind of work results in.”

If a law blocks harm prevention then it shouldn’t be considered a law at all, he adds.

Magnuson moved the CSP to a permanent location after Vancouver Councillor Rebecca Bligh put forward a motion June 2019 calling for city staff to look into how it could facilitate low barrier cannabis access in the Downtown Eastside. Bligh has been a vocal advocate for using cannabis as a harm-reduction tool during the overdose crisis.

We need federal and provincial leadership to enable low-barrier access to cannabis. The high-cost retail model leaves low-income people without access to cannabis, a clean and safe alternative to dangerous drugs. 1/2 https://t.co/LERp8yysKR

The staff report, published Oct. 20, concludes that low-barrier access to cannabis is important during the overdose crisis — which has killed 1,507 people in Vancouver alone since January 2016 — but the city’s hands are tied when it comes to providing it. Prices for recreational cannabis are set by the province, and medical cannabis is controlled by the federal government.

It’s difficult for the city to support Magnuson’s initiative because he’s operating outside of the law, Bligh explains over the phone.

“Neil is just so grassroots in his approach that he doesn’t fit into existing rules and regulations which our bylaws are derived from,” she says.

Vancouver was able to regulate cannabis under its Medical Marijuana-Related Uses bylaw, which was in effect from June 2015 to October 2018, but there doesn’t seem to be the same access point under the Cannabis Act, Bligh says.

The Serious Hope Society was in court with unclean hands because there aren’t laws for what Magnuson does, cannabis lawyer Conroy says.

The society has applied for an exemption under section 140 of the Cannabis Act to be allowed to operate at their current location. If granted, it would allow the society to sell medical cannabis from a storefront, its members to carry licit and illicit cannabis up to 30 grams, and legal protection for its suppliers.

The federal exemption has been supported by Bligh, Vancouver Councillor Jean Swanson, lead cannabis researcher M-J Milloy, University of British Columbia professor Zach Walsh and many more, notes Magnuson, adding they make a very strong case and it will likely be approved. But when it will be approved is anyone’s guess. 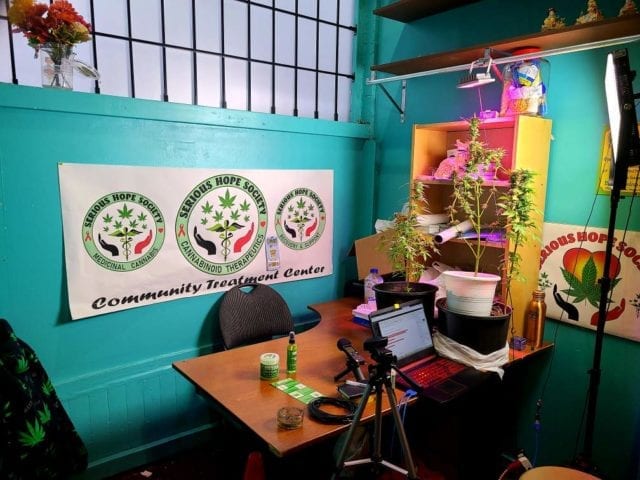 Founder Neil Magnuson says he has until October 30 at 5 p.m. to vacate the store. As he has also been living at the location he has until Friday to find a new place to live. Photo by Greg Wells

For now Conroy says the society will keep trying to help people at high risk of overdose, while he tries to figure out a way to do it legally.

That plan includes: being granted the federal exemption so the store can be licensed with exceptions to allow medical sales from a storefront, the sale or donation of high potency edibles and extracts, low barrier access and finding a way to bring legacy growers into the regulated market, Conroy says.

Until then Magnuson is exploring options for where to go next. The society will continue to operate six days a week, eight hours a day, he says. On Friday they’re moving into an RV parked out front of the store, where they will continue to operate with reduced product selection and staff. Magnuson is looking at other possible retail locations in the neighbourhood, and is even considering renting a shipping container.

They will not go back to the previous setup of having people line up for hours twice a week.

Top image of the staff and volunteers at the Serious Hope Society and Healing Wave. Neil Magnuson is fourth from the right. Photo by Glen Wells 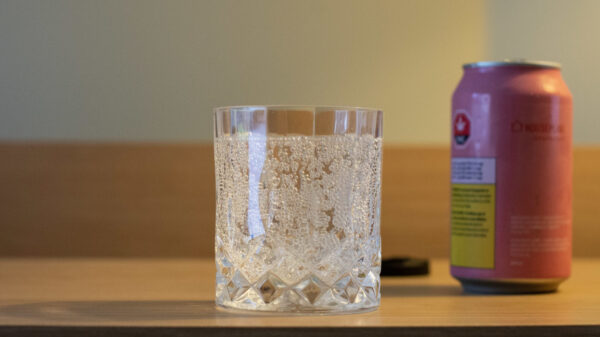 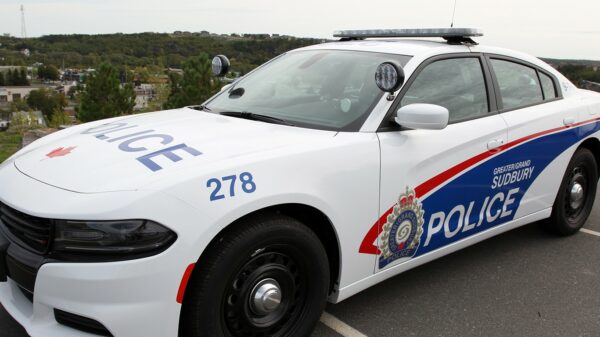