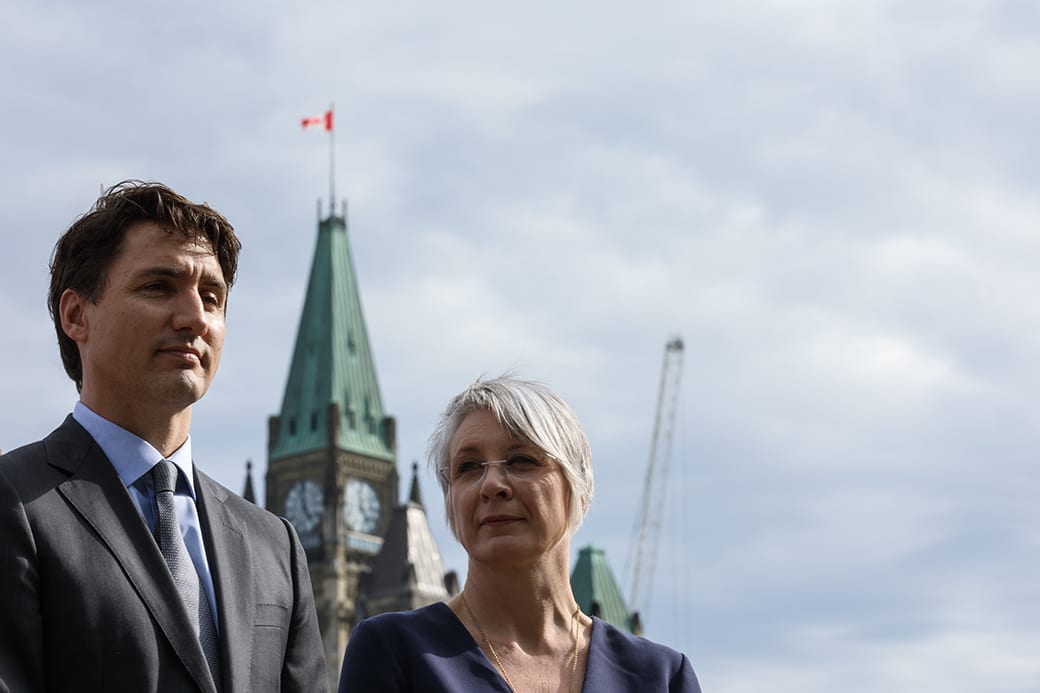 Cannabis isn’t nearly as dangerous as tobacco or alcohol for Canadians.

That’s Health Canada’s message to Health Minister Patty Hajdu in documents briefing her on her new role. Hajdu was sworn into cabinet Nov. 20 2019.

This message contrasts with Prime Minister Justin Trudeau’s mandate to the new minister, which contains a call to continue the strict regulation of cannabis but mentions neither tobacco nor alcohol.

Health Canada’s briefing summarizes, among other things, the costs associated with substance use. Those costs include lives lost and economic harm.

In the report, which was released in September but has since been updated, its authors break down medical expenses by substance.

A huge honour to be appointed the next Minister of Health. I’m looking forward to continuing the incredible work of @GinettePT to promote and advance the health and well-being of all Canadians. 🇨🇦 pic.twitter.com/szdZUCaeoR

In 2018, tobacco reportedly killed 47,562 Canadians, alcohol killed 14,827 and opioids killed 4,460. No national numbers are available on how many people died from cocaine, hallucinogens or amphetamine use. There were no known deaths from cannabis use.

“Alcohol is the most costly substance to Canadian society, and causes nearly 15,000 death a year,” the document reads. Tobacco is also labelled by Health Canada as the leading cause of premature death and disease in Canada. Both are dangerous because they are normalized, the document states.

The cost of tobacco

Tobacco, including nicotine vapes and cigarettes, is the country’s most harmful substance. And it’s used by 18 per cent of the population.

As well as killing 47,500 people, it sends almost 240,000 people to the emergency room each year, and puts half that number in the hospital for longer visits. 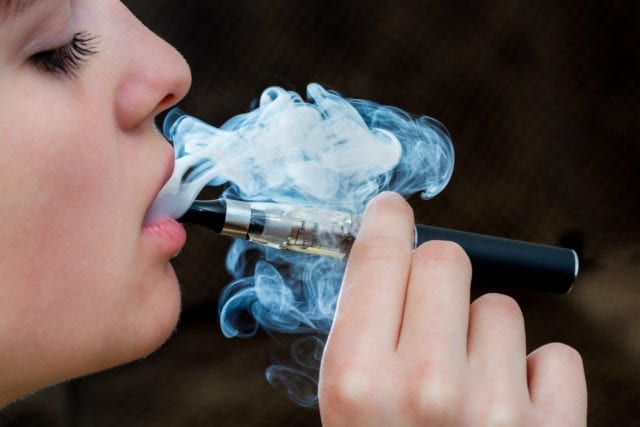 Tobacco is considered the most dangerous substance used by Canadians.

It’s an expensive habit for more than just the people buying cigarettes, according to the data. Through smoke breaks and missed days at work, tobacco costs the Canadian economy $12 billion annually, the second-most costly substance behind alcohol.

The cost of alcohol

Alcohol is the second deadliest substance, Health Canada says, but costs Canadians the most through lost productivity and policing costs.

Some 78 per cent of Canadians hit the bottle each year, with just over 649,000 people ending up in the ER, and almost 88,000 people hospitalized due to alcohol use in 2014. Hangovers cause $14.6 billion in lost productivity and have one of the largest costs to police too, with 250,000 counts of policing in 2014, the briefing states.

Substance-use-attributable costs — in areas including healthcare, the criminal justice system and economic productivity — cost Canadians $38.4 billion in 2014. The cost has been slowly rising since 2007, when substance-use cost an annual $34 billion, and is likely higher today, though that data has not yet been released by the government.

The cost of cannabis

In 2019, around 15 per cent of Canadians reported using cannabis in the past year, according to the report.

Younger people use cannabis more frequently, with 27 per cent of Canadians aged 15 to 24 reporting use within the past three months. These rates slowly decrease as the population gets older, with only 12 per cent of people aged 45 to 64-years-old reporting frequent use. 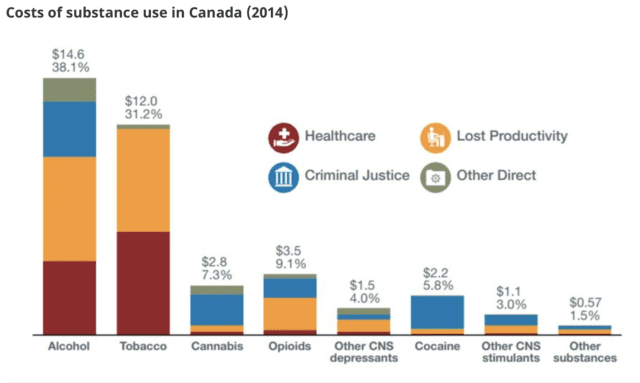 The cost created by substance use in Canada in 2014. Graph from the briefing report for the Health Minister.

There aren’t any known deaths caused by cannabis use, but 638 people died from lung cancer and 212 died from car accidents that were related to cannabis in 2019, according to Health Canada.

Cannabis sent 3,800 people to the ER and cost the economy $2.8 million in 2014 — mostly in expenses related to the criminal justice system.

The cost of opioids

Opioids cost the economy $3.5 billion annually, the third-highest out of any other substance, according to the report.

Health Canada says alcohol use, including binge-drinking, is normalized in Canada. In the briefing, it states the government’s approach to alcohol is far more relaxed than its approach to tobacco or opioids. Tobacco too is highlighted as the most deadly substance available, and as the leading cause of premature death and disease.

Cannabis legalization and regulation are still in their early days and should be monitored closely, the document reads, but for now weed is referred to as a “lower risk substance,” while tobacco, cocaine and opioids are considered “higher risk substances.”

The rising rate of methamphetamine use, especially in the prairies, is also listed as a concern.

In this article:alcohol, opioids, Patty Hajdu, substance use, tobacco