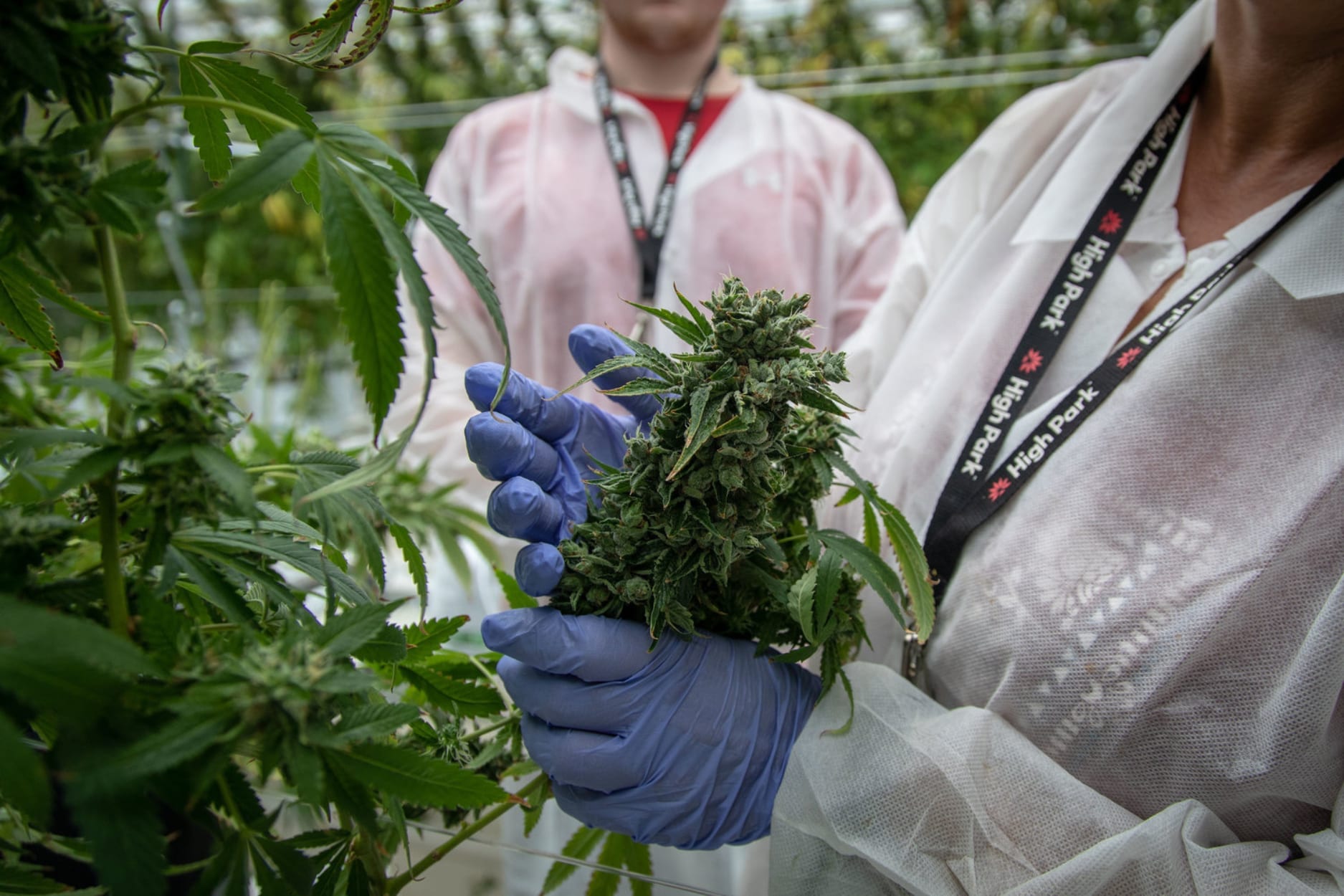 As Canadian provinces and the U.S. report record numbers of suspected overdose deaths in 2020, compelling research is continuing to signal that cannabis could be a useful tool in combatting this deadly public health crisis.

A new study that tracked 1,145 Tilray-registered cannabis patients over a six-month period shows baseline opioid use in 28 per cent of participants dropping to 11.3 per cent, and daily opioid use falling from a 152 milligram morphine milligram equivalent (MME) to a 32.2 milligram MME — a 78 per cent reduction.

The research was funded by licensed producer Tilray Inc. (Nasdaq: TLRY) and published in the journal Pain Medicine.

Unfortunately, we’ve lost sight of the overdose crisis during Covid-19, says Philippe Lucas, a researcher at the University of Victoria who lead the study and Tilray’s VP of patient research.

British Columbia’s coroners service reported 1,548 overdose deaths from January to November 2020, compared to the record number of deaths for the full-year 2018, when 1,549 people died. The U.S. Centers for Disease Control and prevention said over 81,000 drug overdose deaths occurred in the U.S. in the 12 months ending May 2020, the highest number of overdose deaths ever recorded in a year.

Both agencies cite the pandemic exasperating conditions that lead to widespread increases in mortality, largely related to a toxic supply of synthetic opioids.

In a worsening overdose crisis, research suggests cannabis could save lives

“We can’t lose sight of the incredible impact that the opioid crisis is having on morbidity and mortality in Canada, North America and around the world right now,” Lucas tells Mugglehead in a phone interview. “And I am strongly supportive of cannabis-based interventions in that crisis.”

These can take many forms, he says.

One example that follows evidence from University of British Columbia researcher M-J Milloy and the BC Centre on Substance Use is making cannabis available to people enrolled in opioid agonist therapy. Weed use in conjunction with therapy has been shown to increase overall success rates and adherence to treatment, while reducing withdrawal symptoms and cravings for opioids. 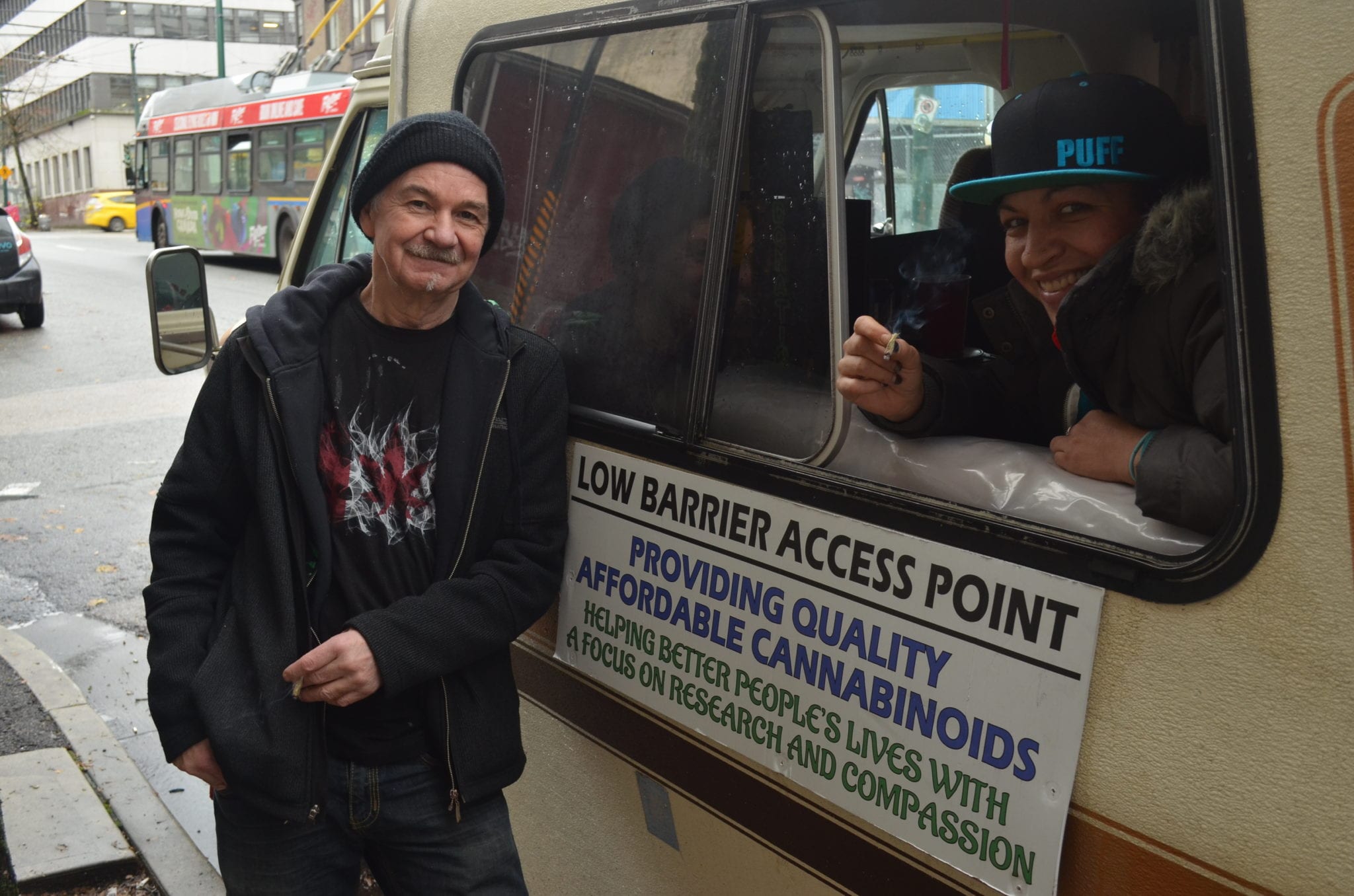 Activist Neil Magnuson, whose Cannabis Substitution Project provides low-barrier access to weed in Vancouver’s Downtown Eastside, has been evicted from his storefront following a court order. The initiative continues to operate from a camper van. Photo by Michelle Gamage

Canopy Growth professor Milloy, who has published numerous papers on cannabis and opioid use, has called for initiatives like Vancouver’s Cannabis Substitution Project to be given pilot intervention status by government to address the overdose crisis.

In September, B.C.’s Ministry of Mental Health and Addictions said it was authorizing an emergency list of substances health workers could prescribe and dispense to curb the increasing death toll. Mugglehead asked the public agency in September if cannabis would be included. The list, which a spokesperson said was expected to be published in October, has still not been released.

While research in previous years had cast doubt on cannabis as a substitute for opioid use, Lucas explains that the physician-tracked methodology of this study provides a next level of confidence in the findings.

“This study really moves us beyond what our current understanding is of cannabis and opioids,” he says. “There have been a lot of other studies that have looked at this, but they’ve largely been cross-sectional, based on patient self-report, or they’ve been retrospective population level studies that have looked at changes in opioid use following medical cannabis or recreational cannabis legalization in the U.S.”

“What makes this study quite different is its individual level. Instead of looking at population level, we’re actually looking at changes within patients over time,” Lucas continues. “We’re not asking patients whether or not they reduce their use of opioids or the other drugs in this study, we’re tracking it over six months time with the data being entered by by physicians in a highly detailed manner down to the milligrams per day of each prescription drug that these patients were using.” 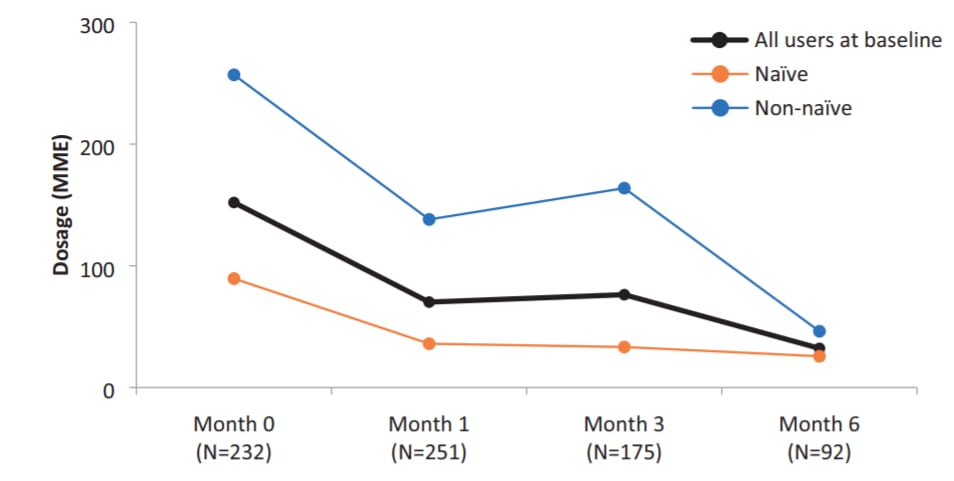 Data showing reduction in opioid use over a six-month period for naïve and non-naïve cannabis patients. Chart via “Cannabis Significantly Reduces the Use of Prescription Opioids and Improves Quality of Life in Authorized Patients: Results of a Large Prospective Study”

This provides a much more granular view than anything that’s come before, and relies on objective tracking measures over time instead of self-report or retrospective population-level analysis.

Another important aspect of the Tilray patient study is that it differentiated between people who had previously used pot, which represent the majority of medical cannabis patients in Canada, and those who are new to it.

The researchers found that “non-naïve” patients experienced the same reductions as naïve patients.

“People might have presumed that those who have been using medical cannabis already aren’t going to see medically significant benefits once they get into the legal, authorized medical cannabis system,” Lucas said. “But what we saw was quite the opposite.”

Patients with histories of cannabis use decreased their dependence on pharmaceuticals and experienced the same quality of life improvements, which Lucas believes could be related to having access to a consistent, quality controlled source. 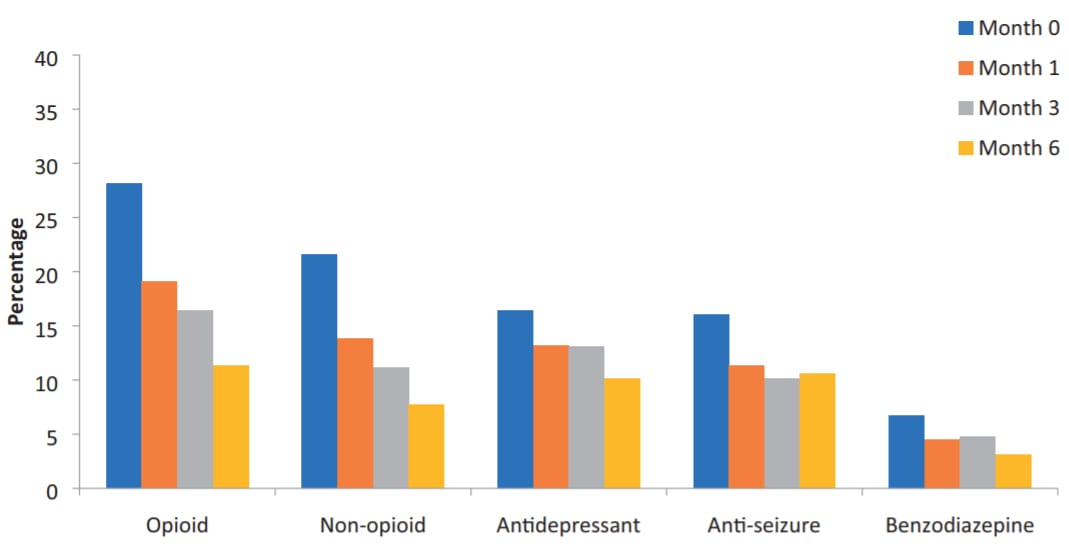 Data showing percentage reductions in opioid medications as well as other prescription drugs. Chart via “Cannabis Significantly Reduces the Use of Prescription Opioids and Improves Quality of Life in Authorized Patients: Results of a Large Prospective Study”

The study also shows that prescribed cannabis lead to reductions in non-opioid medications including antidepressants, anti-seizure pharmaceuticals and benzodiazepines.

Although licensed production of medical cannabis has been a legal regime since 2013, most of the country’s insurance programs don’t provide coverage. Of the patients in the Tilray study, only 10 per cent had their medical weed covered.

But the research suggests insurers could be saving money if more patients were prescribed cannabis. At the beginning of the study, the average monthly spend on prescription drugs was $106 per month, which fell to $18 by the end of the study — an 87 per cent cost reduction.

That’s why Lucas says he and his peers have been working hard with the insurance industry to increase private payer coverage, which would ultimately lead to public payer coverage. There are other trickle-down benefits, he notes, like reductions in ancillary health care costs, like less emergency room visits, less visits to the doctor overall, as well as reducing the morbidity and mortality associated with many of the prescription drugs that decrease when medical cannabis is introduced.