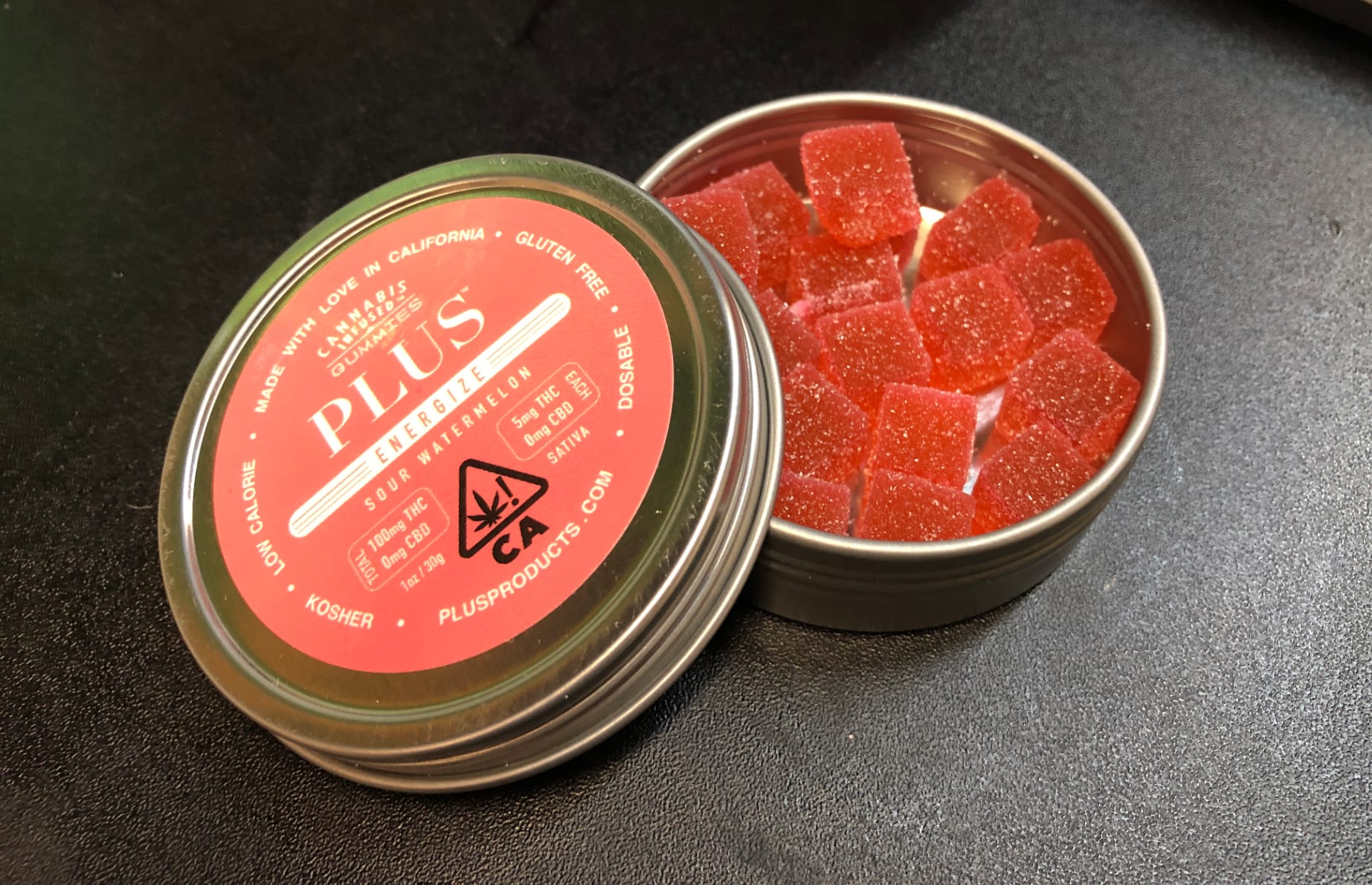 While vape sales continue to dominate the cannabis 2.0 category in Canada, gummies are poised to eat up more market share as manufacturing catches up to demand.

That’s according to the latest round of data from weed analytics firm Headset, which shows vaporizers commanding two-thirds of 2.0 product sales and 15.96 per cent of total sales in July. 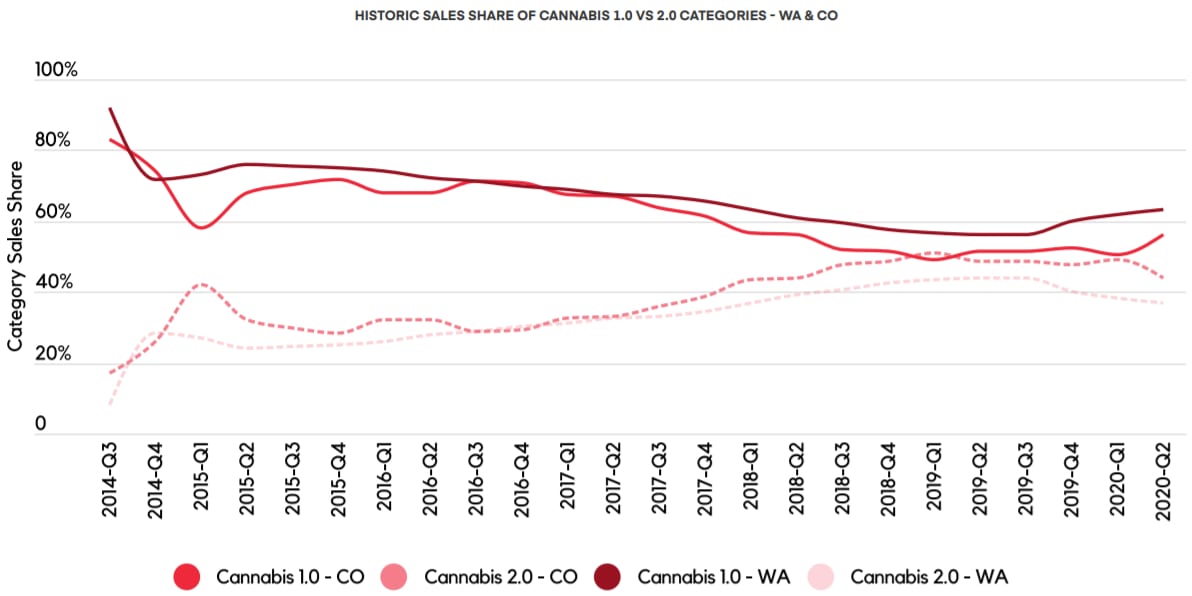 Cannabis 2.0 products including beverages, concentrates, topicals and vaporizer pens became available to Canada’s regulated market in late December. Based on data from more mature U.S. markets, Headset predicts this category to eventually make up 40 per cent of total weed sales. 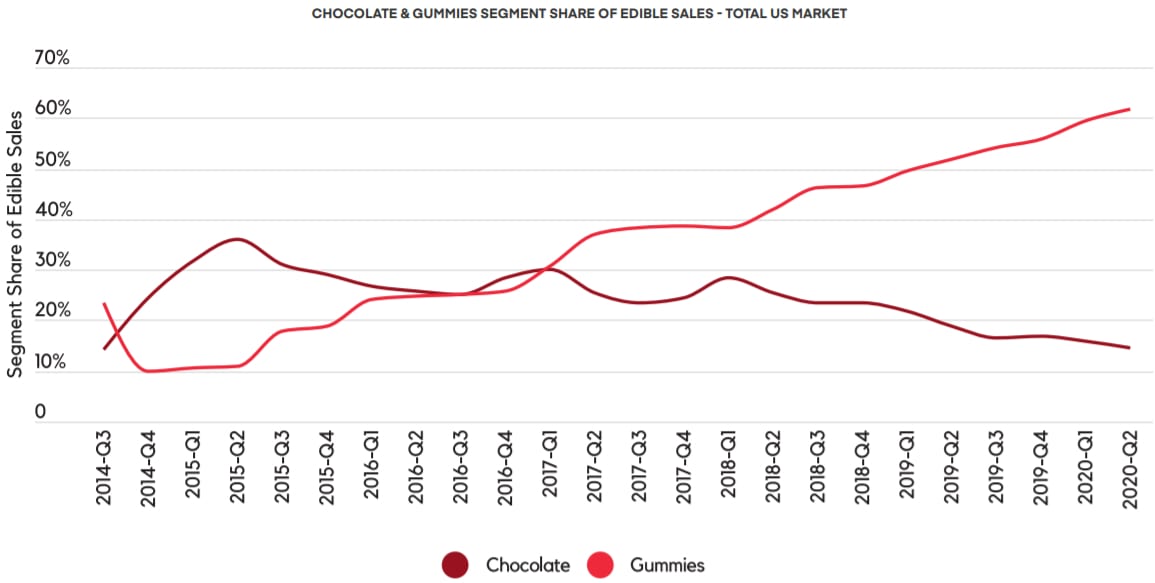 Since 2014, gummy sales have steadily grown to command over 60 per cent of the edibles segment today, while chocolate makes up only 15 per cent. Chart via Headset

A chart depicting chocolate and gummy market share over time in the states shows chocolate with the initial lead followed by an eventual dominance of gummy sales.

A second chart shows infused chocolates in Canada dominating the edibles space with an average 65 per cent market share over the past seven months — a portion Headset says is not unlike chocolate’s initial 36 per cent share of the U.S. edibles market in 2015. The main reason for the initial discrepancy, the data company explains, is that the U.S. has had many more segments in the edibles market — 11 in the states compared to just six in Canada. 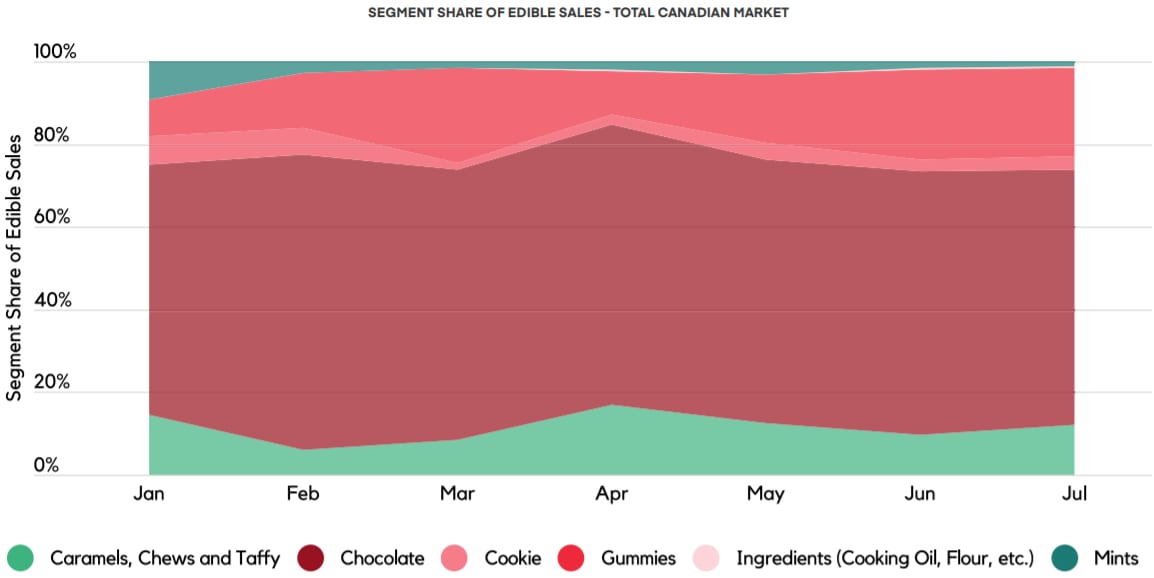 Headset has identified a significant opportunity for gummy producers. Chart via Headset

Headset also points out that only two of the 12 currently operational edible brands in Canada make gummies.

“To put this in perspective, in the US there are 187 brands that make gummies,” the data report reads. “All of this data, when viewed together, suggests that gummies in Canada are primed to see increases in sales share within the edibles category and that there is an opportunity for new brands to enter the space.”

Although markets tend to move in predictable directions, segments vary meaningfully from region to region. 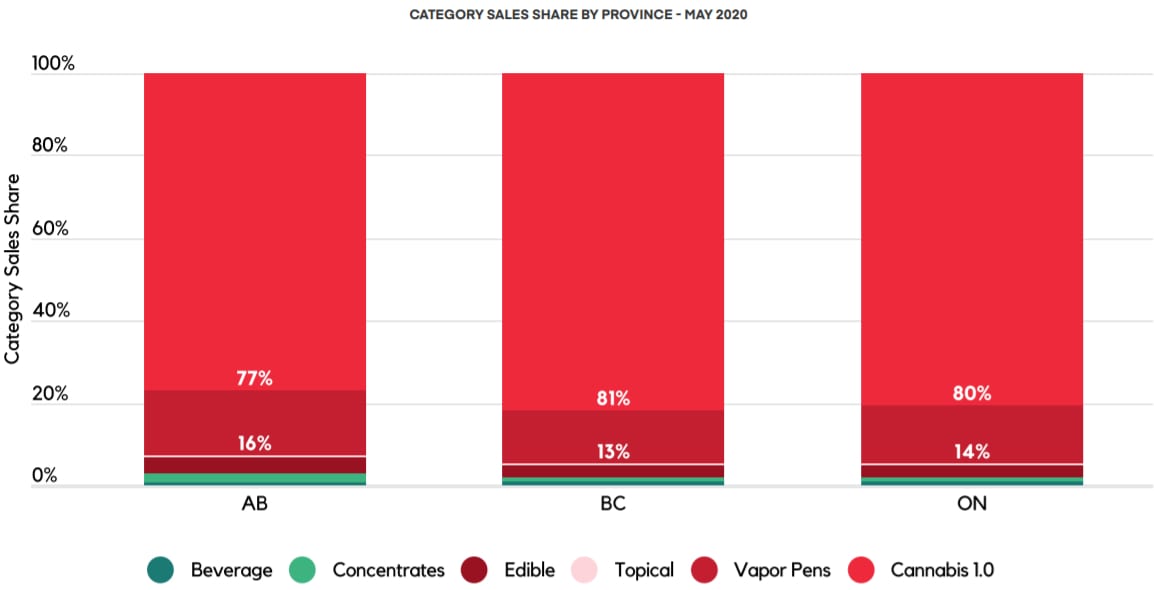 With approximately 500 stores, Alberta has Canada’s most advanced private retail market. This could suggest that vape sales will command more of the market as products become available to a wider consumer base. However, it could also be the case that B.C. consumers prefer bud over vapes. Chart via Headset

While the pandemic has added challenges to an industry still breaking out of the gates, the licit Canadian cannabis market has been growing at a steady tick. The introduction of new product categories, Headset says, will greatly change the growth trajectory of the market as well as the product landscape.

“By using developed U.S. markets, such as [Colorado and Washington], as proxies for the future composition of the Canadian market, one can expect to see rapid sales growth of cannabis 2.0 products and a more even split of category sales share between cannabis 1.0 and 2.0 products,” the report reads. “Within cannabis 2.0 categories, it appears likely that vapor pens and edibles will lead the growth surge, and within edibles we expect to see an increased sales share of the gummies segment, which has become a dominant segment in U.S. markets.”