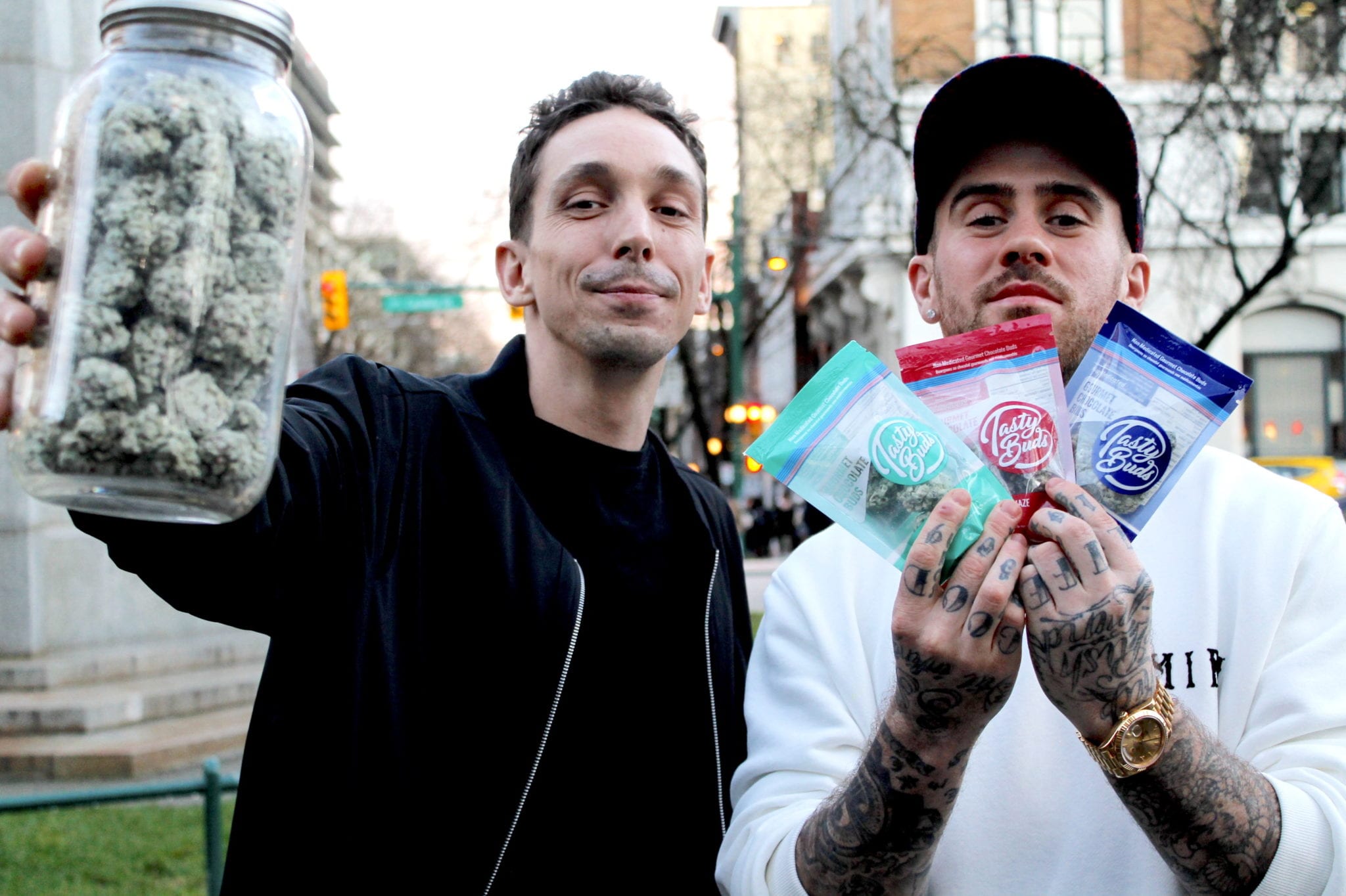 Tasty Buds co-founders Scott Symons and Duane Hase have been buds for over 15 years. They talk over one another explaining how they met at Vancouver’s Plaza Skate Park. Hase had weed on him, Symons had papers — instant friendship.

Together they run a cannabis-mimicking confectionery company called Tasty Buds, which ships internationally to over 10 countries.

It looks so similar to weed that Netflix has requested jars of Tasty Buds to use as props, Hase said.

But that’s where the comparison ends. The cookies are for popping in your mouth, not in a bong, and come in flavours like mint, blueberry, raspberry and maple. 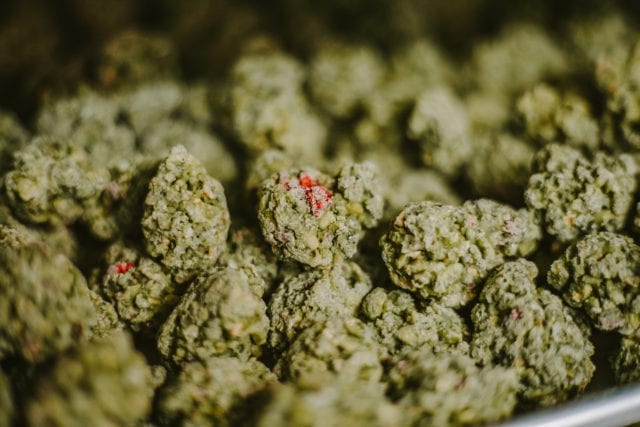 Tasty Buds cookies might look like weed but these nugs are cannabis free — but that will soon change, co-founders Scott Symons and Duane Hase said. Photo courtesy of Tasty Buds. 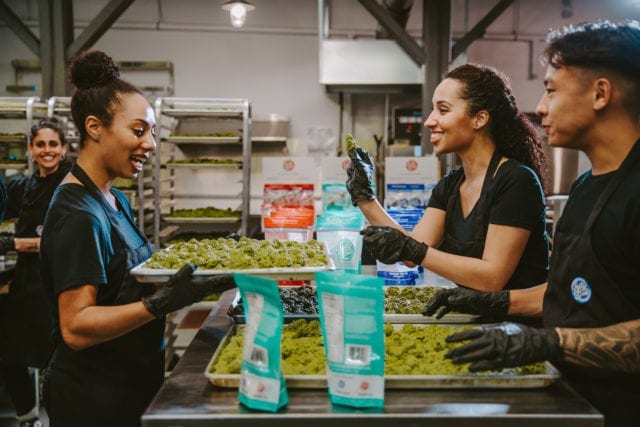 The Tasty Buds team is small at just five employees, but can expand to 10 during production at the kitchen located in East Vancouver. Photo courtesy of Tasty Buds.

The friends stumbled across the idea of Tasty Buds back in 2018 when Canada was gearing up for legalization. They started experimenting with recipes in April 2018 and were ready to launch to retail October 2018.

To spread the word they set out on a tasty tour across Canada to peddle their product to cannabis head shops and retail stores. That target market quickly expanded when they tried pitching Tasty Buds to a souvenir shop in Victoria. The owner of the store thought the idea was a riot and customers were trying to buy the product before Symons and Hase had left the store.

Since the company launch, Tasty Buds has sold around 120,000 bags, or around 10,000 packages per month, Symons estimates. After pairing up with some national head shop distributors Tasty Buds can be found in over 500 stores in all 10 provinces and the North West Territories.

Standing in front of dragons

The pair even appeared on Dragon’s Den.

They offered the dragons 10 per cent of their equity for a $150,000 investment — and were willing to hand over at least 20 per cent if they asked, Hase said. Lucky for the buds, dragon Manjit Minhas offered to invest for 15 per cent and they took her offer. 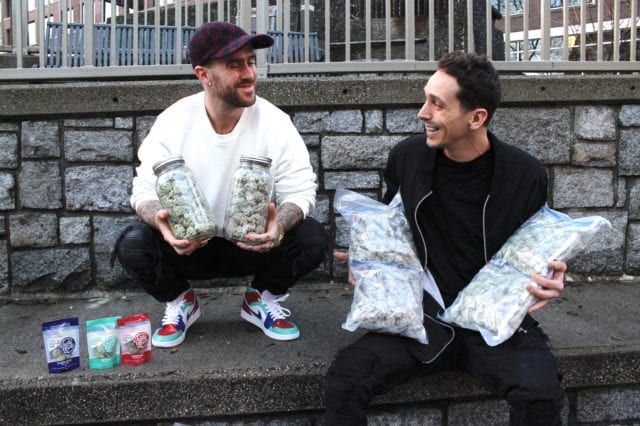 Many of the dragons were unimpressed with the tongue-in-cheek fun of the product and voiced concern it would encourage kids to use cannabis. Minhas is seen dramatically rolling her eyes at these concerns.

The questions didn’t phase the buds either — it’s a concern retailers raise with them often.

“We had already had these conversations with candy store and gift shop owners all across Canada,” Symons said.

The cookies aren’t designed for kids and don’t encourage kids to use cannabis any more than Popeye candy cigarettes get people hooked on nicotine, he added.

“This product has always had a focus on breaking down the stigma around cannabis… Cannabis is legal now. They sell liquor confectionery and candy confectionery as cigarettes. We’re no different,” Symons said.

For now the cannabis lookalike cookie will only give consumers a sugar buzz, but the buds are looking to change that.

Infused cookies is where the company has always been heading, Hase said. 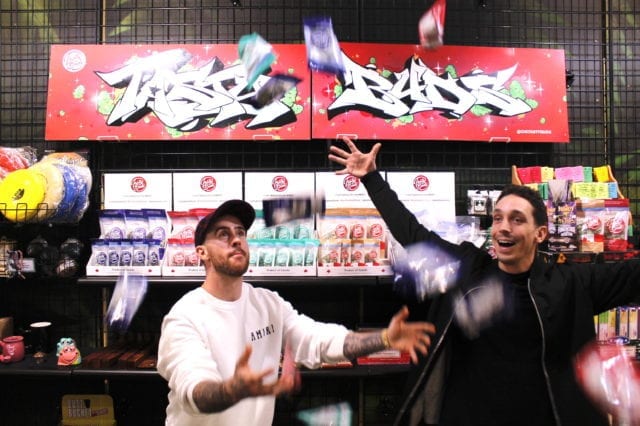 Current Canadian restrictions mean the buds would have to choose between producing infused or non-medicated products — the rules say you can’t have both, Hase said. Tasty Buds would also have to move to plain packaging, slash their advertising and fire their mascot, a three-metre tall animated nug called Mr. Tasty.

That is why the duo have their sights set on the American market where their brand could continue to grow, Symons said.

Brand recognition from consumers, he added, is how companies will succeed in the weed business.

“There are hundreds of companies making pre-rolls, hundreds of companies launching new strains. The power of this industry and what everything will come down to is the brands,” Symons said. “Flower, extract, edibles or novelty chocolate — they’re all something that can be replicated…. What the consumer will end up following is that go-to brand.”

The duo will likely start off infusing products with THC before other cannabinoids, because CBD is being built up to be a wellness product — and chocolate cookies aren’t really a healthy snack, Hase said.

For now, the buds are focusing on building their brand and exploring their options in different emerging markets. That certainly includes keeping up with the ever-changing regulations in their own Canadian back yard, he added.