Through its subsidiaries, Flowr has licensed outdoor and indoor production in Portugal. Image via Flowr

On Tuesday, the Kelowna-based company announced its financial results for the three months ended March 31.

Selling, general and administrative expenses amounted to $2.9 million in the first quarter, a 29 per cent decrease from $4 million during the same period last year.

Flowr reported that the sale of retail products totalled 257 kilograms in the first quarter, compared with 541 kilograms in Q1 2021.

Sale of cannabis through bulk wholesale channels totalled 923 kilograms versus 131 kilograms, primarily due to higher production from the company’s K1 facility in Kelowna.

“The first quarter of 2022 showed that we remain on track with our objective on maintaining our status as a premium cannabis producer. Also, our continued focus on cost reductions is showing in our bottom-line improvements,” interim CEO Tom Flow said in a statement. 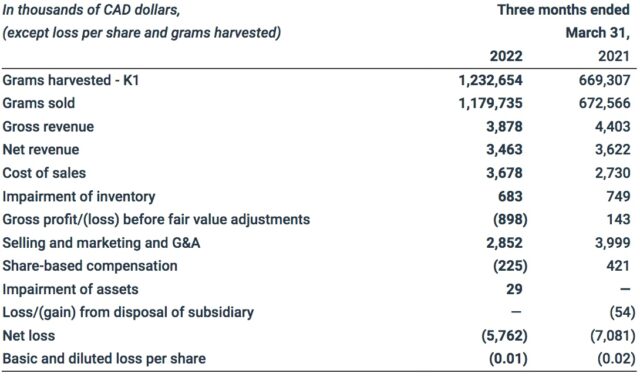 Chart via The Flowr Corporation

Operational highlights in the first quarter included full operation of all 20 grow rooms at the company’s K1 facility, while THC levels increased by an average of 4.9 per cent compared to Q1 2021.

Flowr’s harvest yield was 84 per cent higher than the previous year (1.2 million grams compared to 669,000 grams).

In addition, the company continued to trial more than 50 new genetic strains to offer consumers a variety of THC levels and terpene contents.

The company has shown retail growth across its core markets of Alberta, British Columbia and Ontario, with more than 60 per cent of cannabis stores carrying Flowr products.

Flowr increased its product offerings during the quarter with the launch of BC Vanilla Frost and BC Tropical Zktlz in Quebec, BC Clementine Crush in British Columbia, and BC Strawnana in Alberta.

Earlier this month, Flowr completed the sale of wholly owned subsidiary Holigen Holdings and an arm’s length third party received a cash payment of $1.2 million and 96,354 common shares of Akanda Corp. as an advisory fee as part of the sale.

The company recently paid $1.6 million from the Holigen sale towards the repayment of the ATB term facility upon closing of the transaction.

Company stock was down 10 per cent Tuesday, falling to $0.045 on the Canadian Venture Exchange.