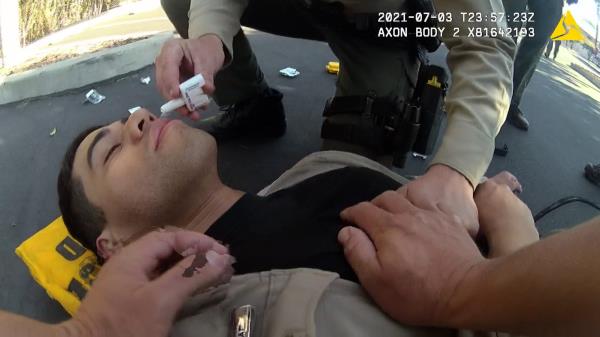 A contested video put out by a Californian sheriff’s department about the dangers of fentanyl perpetuates false narratives and puts lives at risk, advocates argue, while hundreds of frontline workers, health researchers and people with lived experiences are demanding a correction.

A video circulated by the San Diego County Sheriff’s Department shows a trainee dropping to the ground on July 3, after being exposed to a white substance that officers believed to be fentanyl. The video has drawn criticism for suggesting casual contact with fentanyl can cause an overdose.

The video pieces together the scene with body camera footage accompanied with a dramatic narrative by the officers involved, explicitly stating the trainee “nearly died after the exposure.”

Narcan was administered to the trainee before he was taken to hospital. The department’s “Dangers of Fentanyl” video and statement is listed as “public safety.”

Dear @SDSheriff: Please take down this dangerously inaccurate video immediately. As a group of >300 drug experts, we are begging you to hear reason. Read our letter at https://t.co/ExwRxKTWiE.@Vimeo Please pull this nonsense now. Lives depend on it. https://t.co/7zKDCLuIMa

“It is unconscionable and completely irresponsible for law enforcement organizations to continue fabricating false narratives around fentanyl,” argues Kassandra Frederique, executive director of the Drug Policy Alliance (DPA), in a statement.

“Content like this simply creates more fear and irrational panic that fuels further punitive responses to the overdose crisis, instead of the public health approach we need. We already know how this story goes, because we experienced it in the ’80s and ’90s with crack-cocaine. Law enforcement-driven, media-perpetuated hysteria inevitably leads to extreme racially-biased enforcement and mandatory minimum sentencing.”

As of Tuesday, more than 350 health professionals, first responders, public health researchers, drug journalists, and people with lived experience have signed a retraction request about the myth that contact with fentanyl is a risk for overdose responders.

In the request addressed to writers and editors, the group links to medical and scientific evidence that overdosing from fentanyl exposure doesn’t happen by being in close proximity to the drug. A statement of correction is provided along with links to educational resources.

“Fentanyl and fentanyl analogues do not readily cross the skin barrier and do not aerosolize well. The only way to overdose on these substances is from injecting, snorting, or otherwise ingesting them, or in the case of the fentanyl patch, from mixing with an absorbable solvent and applying very large quantities for very long durations of time. Furthermore, opioid overdose is a clinical syndrome with well-defined characteristics that do not align with these reports,” Marino says in a statement.

Despite the evidence, misinformation persists, including within law enforcement.

“Based on our experience reading hundreds of similar news articles, we recognize that a reliance on reports from law enforcement officials, rather than medical experts in toxicology, often contributes to spread of incorrect information. We implore you to avoid this mistake in future drug reporting,” reads the retraction request.

The consequences of misinformation can be dire, the group of experts argues. Not only is stigmatization against people who use drugs furthered during a public health crisis, but misinformation can delay a timely overdose response with unnecessary precautions, such as waiting to administer naloxone. There’s also concern first responders may suffer emotional trauma under the impression that passive exposure put their lives at risk.

As the U.S. faces the highest overdose rates in its history, DPA’s Frederique says it’s “incredibly dangerous” to go down a path of misinformation and instead calls for health and evidence-based approaches to address fentanyl-related overdoses over punishment-first strategies.

“We call on media to think twice about amplifying these harmful narratives that have devastated Black, Latinx and Indigenous communities over the last 50 years and led to more dire public health and societal consequences as a result,” Frederique continues.

Mugglehead has reached out to the San Diego County Sheriff’s Department for comment.

Read more: BC first in Canada to bring in prescribed safe supply of illicit drugs