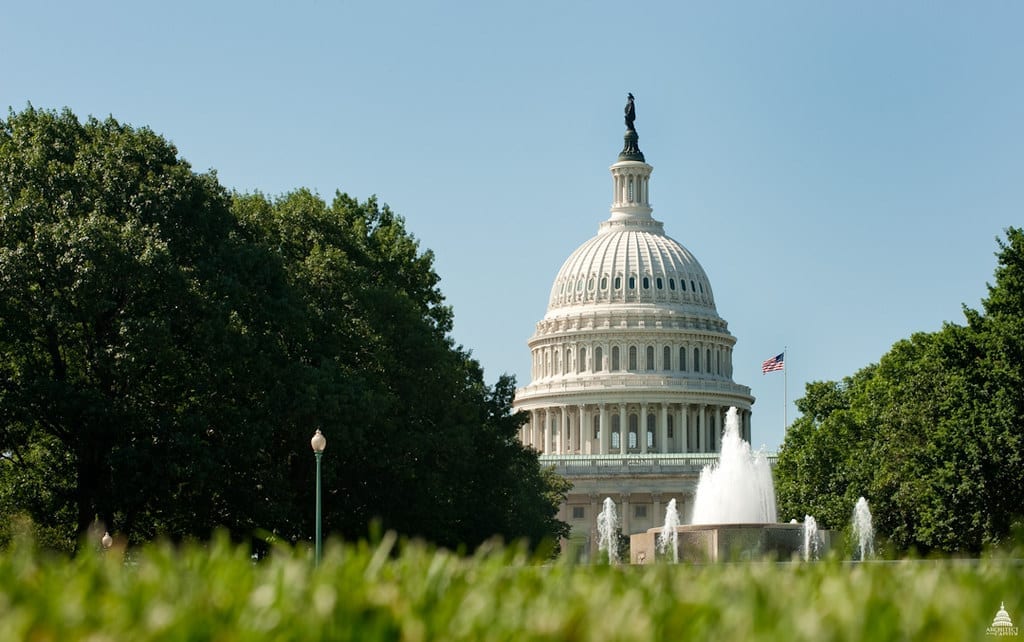 The U.S. Capitol and Senate fountain. Image via US Capitol Flickr

A bill to decriminalize all drugs in the U.S. has been introduced for the first time in hopes of replacing policies focused on criminalization and punishment.

Reps. Bonnie Watson Coleman and Cori Bush brought forward the Drug Policy Reform Act Tuesday. The bill takes aim at the ineffectiveness of the war on drugs and offers a health-focused approach to substance use. Within a few weeks, the bill is expected to be formally filed in Congress. Building out support through cosponsorship of the bill will follow while the decriminalization conversation and education begins in Congress.

From 2001 to 2010 over 7 million people were arrested simply for possession of marijuana. This has contributed to the United States – the land of the free – with the highest incarceration rate in the world. And none of this has made a dent in our use of drugs.

The bill would decriminalize all drugs at a federal level, expunge current records and allow for resentencing. Life-long consequences as a result of drug arrests and convictions — like the denial of work, public benefits, immigration status, driver’s licences and voting rights — would be eliminated.

Read more: California decriminalizes personal possession and use of psychedelics

Queen Adesuyi, policy manager for the office of national affairs at the Drug Policy Alliance (DPA), noted in a statement the bill offers support and “gives people who have been harmed by these draconian laws a chance to move forward and embrace some semblance of the life they have long been denied.”

The DPA has been a strategic partner in the development of the proposed legislation.

“Every 23 seconds, a person’s life is ruined for simply possessing drugs. Drug possession remains the most arrested offense in the United States despite the well-known fact that drug criminalization does nothing to help communities, it ruins them. It tears families apart, and causes trauma that can be felt for generations,” Adesuyi said.

Wellness and compassion ahead of trauma and punishment

Instead of the Attorney General as the regulatory authority, the bill would shift the responsibility to the Secretary of Health and Human Services (HHS), emphasizing substance use is a health issue, not a criminal one. The HHS would set benchmark amounts for drug possession and release a report.

Reinvestments also would be made for health-centered approaches and evidence-based drug research and education would be improved. State and local governments would be incentivized to bring in their own decriminalization policies because federal funding from the Byrne and COPS grant programs would be limited.

Bush said in a statement it’s time to put wellness and compassion ahead of trauma and punishment, as well as repair harm to Black and brown communities.

“Growing up in St. Louis, I saw the crack-cocaine epidemic rob my community of so many lives. I lived through a malicious marijuana war that saw Black people arrested for possession at three times the rate of their white counterparts, even though usage rates are similar,” Bush said. “As a nurse, I’ve watched Black families criminalized for heroin use while white families are treated for opioid use. And now, as a Congresswoman, I am seeing the pattern repeat itself with fentanyl, as the DEA presses for an expanded classification that would criminalize possession and use.”

50 years since war on drugs began

The introduction of the bill comes days before the 50th anniversary of former president Richard Nixon declaring drugs are “public enemy number one.”

“The United States has not simply failed in how we carried out the war on drugs — the war on drugs stands as a stain on our national conscience since its very inception,” Watson Coleman said in a statement. “Begun in 1972 as a cynical political tactic of the Nixon Administration, the war on drugs has destroyed the lives of countless Americans and their families. As we work to solve this issue, it is essential that we change tactics in how we address drug use away from the failed punitive approach and towards a health-based and evidence-based approach.”

A recent poll by the DPA in collaboration with the American Civil Liberties Union found strong support from voters who expressed they want to see a change in American drug policies.

Sixty-six per cent agreed with getting rid of criminal penalties and reinvesting drug enforcement into addiction services. Eighty-two per cent of voters believed it’s important for the president and Congress to reform drug laws in the U.S.

Meanwhile, the Marijuana Opportunity Reinvestment and Expungement Act has been reintroduced into the House of Representatives. The proposed legislation would see cannabis legalized federally and erase most weed-related criminal records.

Update (2021-6-16): This article has been updated to add the timeline of the bill’s formal introduction intro Congress.