The company released its earnings results for its fourth quarter and fiscal year ended Aug. 31, where it reported annual gross revenue of $17.3 million, rising 565 per cent from $2.6 million in its last fiscal year.

Cannara attributes the growth to its retail activities in Quebec, investments in operational development as well as licensing for two giant cultivation facilities spanning around 1.7 million square feet. The facilities have the potential to output around 125,000 kilograms of cannabis per year. The company said it sold around 1,700 kilograms of cannabis during its fourth quarter.

“Our impressive increase in revenue this quarter and incredible overall results for this year demonstrate a year of sustained growth and profitability, one which continued to drive our net income and adjusted EBITDA up,” CEO Zohar Krivorot said in a statement.

During the fourth quarter, the company expanded to Ontario and launched two new hash products under the Nugz brand in Quebec, as well as Old School Hash and Ice Water Hash.

Company stock rose by almost 4 per cent Wednesday to $0.14 on the TSX Venture Exchange. 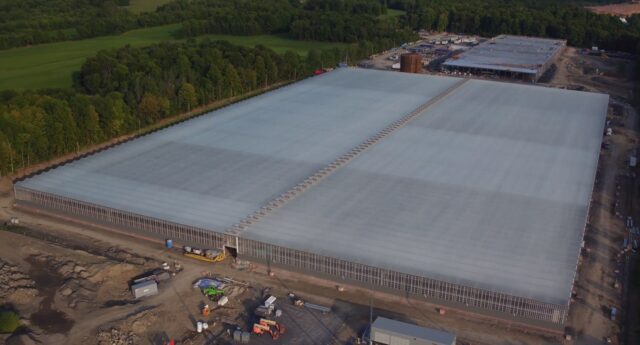 This facility in Valleyfield, Quebec, is one of the world’s largest certified cannabis cultivation facilities. Photo via The Green Organic Dutchman

“The incredible performance, strong balance sheet and increase in gross profit all underscore our long-term growth strategy and commitment to our customers, against the backdrop of strong demand for our products, CFO Nicholas Sosiak said.

“As we continue to generate profitable growth and outsized returns, we will move forward from a position of financial strength and are ideally positioned to showcase continued positive adjusted EBITDA.”

In June, Cannara acquired a one-million-square-foot cultivation and manufacturing facility in Valleyfield, Quebec, from The Green Organic Dutchman Holdings Ltd. (CSE: TGOD) (US-OTC: TGODF) in a $27-million transaction, plus funding of certain deposit requirements of around $5.7 million by a letter of credit.

The facility received its cultivation licence in September, and propagated its first 9,600 plants in November.

Cannara recently introduced new products in Quebec including Cuban Linx and Do-Si-Dos via its Tribal brand and CBD Runtz via its Orchid CBD brand in both 3.5-gram dry flower and 2.5-gram pre-roll formats. Cannara also expanded to Saskatchewan in the fourth quarter.