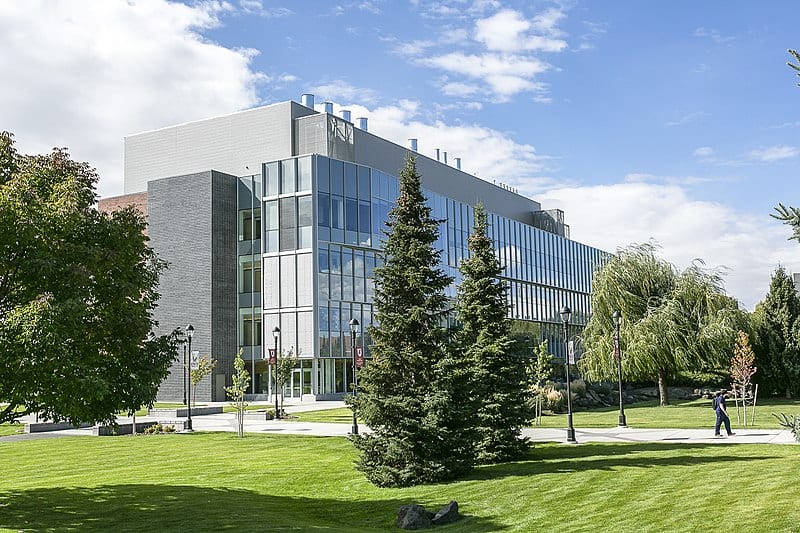 The Elson S. Floyd College of Medicine at WSU in Spokane, Washington. Photo by WSU via Wikimedia Commons

What began as early strides to study cannabis has evolved into a multi-disciplinary research centre at Washington State University (WSU).

Now officially the Center for Cannabis Policy, Research and Outreach (CCPRO), the centre has nearly 100 scientists on weed-related projects.

Cannabis research started at WSU a decade ago, before the state legalized recreational weed in 2012, but the new designation provides dedicated infrastructure and organization, said Michael McDonell, CCPRO director and professor at the Elson S. Floyd College of Medicine, in an email.

The centre’s research ranges from the impact of cannabis and health; policy and the effects of decriminalization on crime and the justice system; as well as the economics of the cannabis industry, among other topics.

“The centre status recognizes our researchers’ outstanding, multi-disciplinary scholarship on cannabis. It also brings together under one centre work on everything from research focused on the impact of cannabis on development to scholarship on cannabis and public safety, as well as our growing hemp research,” McDonell said in a statement.

However, there are still barriers to studying weed in America because it’s considered a Schedule 1 drug at the federal level, despite a recent announcement from the Drug Enforcement Agency (DEA) to expand access to cannabis for research.

In May, the DEA said it was in the process of approving applications for several state-legal growers to become federally authorized cannabis producers for medical and scientific research. The University of Mississippi has been the only source to supply cannabis to U.S. researchers since 1968.

McDonell said in an email that the DEA allowing more locations to grow weed for research was a “step in the right direction, though it’s not the ultimate solution.” A Schedule 1 DEA licence, which McDonell noted is the highest level of approval, is still needed to get cannabis from the approved growers and there isn’t an option to get cannabis from dispensaries.

Even so, McDonnel says he believes the change will result in increased supply to researchers who are looking into specific doses of THC in clinical trials, for example, which had been a challenge before.

“All this said, the barriers of getting a Schedule 1 [licence] for cannabis are still pretty onerous and keep people from pursuing the work. I think there is wide agreement in the scientific field that research cannabis should not be a Schedule 1 drug, though I don’t know exactly what the government will do to address this issue in the U.S.,” he said, explaining that the federal change is “great news” for current Schedule 1 researchers, but that it wasn’t as relevant to most of the cannabis-related scholarship at WSU.