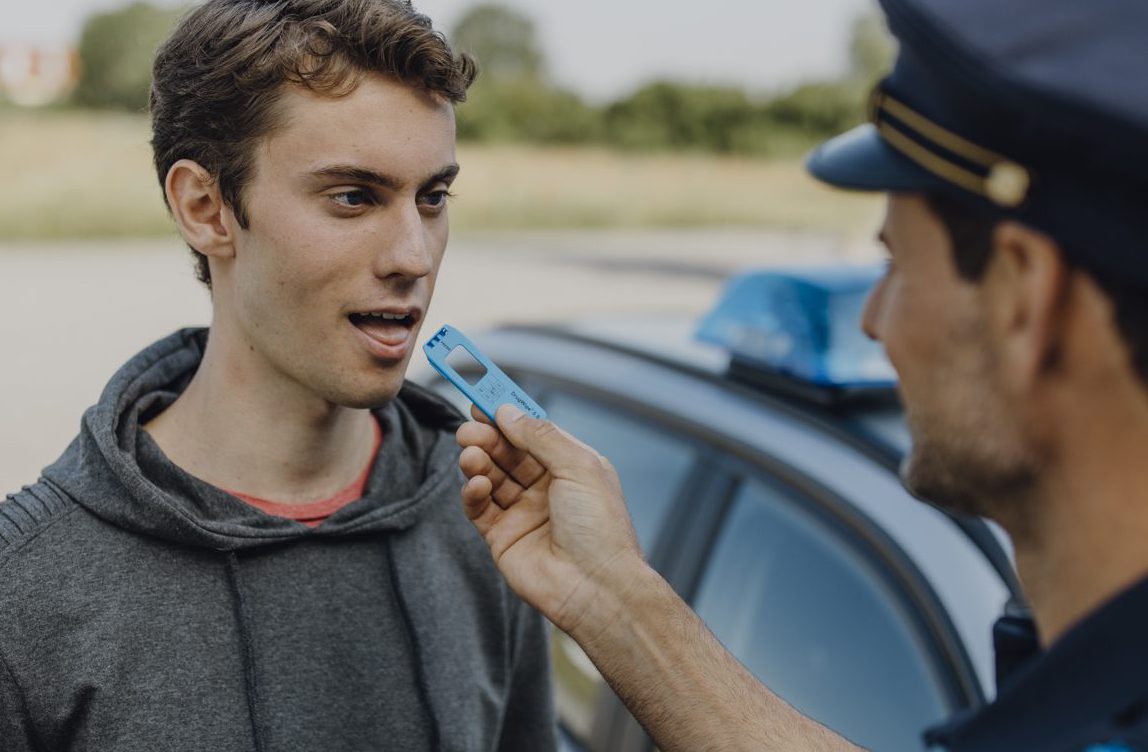 Devices like the Securetec DrugWipe 5S are used widely to detect cannabis impairment at the roadside. Image via Securetec

American researchers have found that looking at brain activity may be a more accurate and reliable way to test for cannabis impairment than other widely used roadside tests.

In a study published on Saturday in the journal Neuropsychopharmacology, researchers at Massachusetts General Hospital say they’ve developed a non-invasive impairment test for cannabis that measures brain activation patterns correlated to impairment from THC.

“Our research represents a novel direction for impairment testing in the field,” lead author Jodi Gilman says in a statement. “Our goal was to determine if cannabis impairment could be detected from activity of the brain on an individual level.

“This is a critical issue because a ‘breathalyzer’ type of approach will not work for detecting cannabis impairment, which makes it very difficult to objectively assess impairment from THC during a traffic stop.”

Unlike alcohol, testing THC concentrations in breath or body fluids doesn’t reliably determine functional impairment. People who use cannabis often can have high levels of THC in their bodies and not be impaired. And metabolites of THC can linger in the bloodstream for weeks after cannabis use.

Since most states have legalized cannabis in some form and cannabis use is on the rise, researchers emphasize the “urgent need” for a portable brain-imagining method that can distinguish between impairment and mild intoxication from THC.

For the study, researchers looked at the brain patterns of 169 cannabis users, aged 18–55 years old, before and after receiving oral THC or a placebo. To do this, participants underwent functional near-infrared spectroscopy (fNIRS), a technique that uses imaging technology.

Dosage varied for participants to account for a wide scope of tolerance while trying to become intoxicated and minimize adverse experiences. With flexible dosing, only about half of the participants became intoxicated. 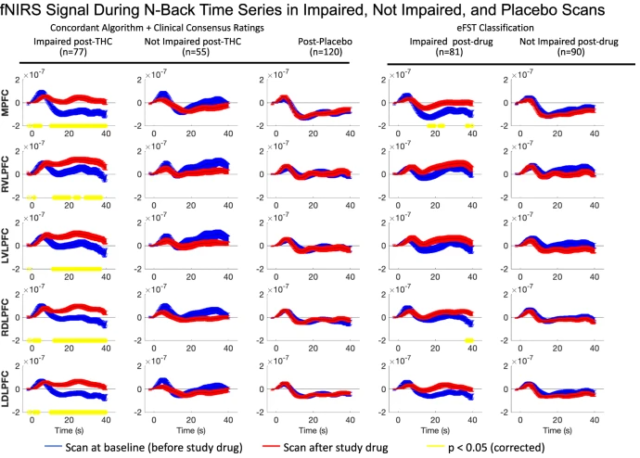 Participants who reported intoxication after consuming THC showed an increased oxygenated hemoglobin concentration (HbO) — a type of neural activity signature from the prefrontal cortex region of the brain — compared to those who reported low or no intoxication.

The study suggests that prefrontal cortex activation is a marker for acute THC intoxication itself, rather than for recent exposure of a similar dose of THC that didn’t cause intoxication or of chronic THC exposure alone.

According to the study, fNIRS could be used in roadside assessments of impaired driving from cannabis. There are portable, lightweight, wireless, battery-powered fNIRS devices that allow data to either be stored on wearable recording units or transmitted wirelessly to a laptop. The assessment can be done without sedation and while a person is moving. It’s also relatively easy to set up.

“Companies are developing breathalyzer devices that only measure exposure to cannabis but not impairment from cannabis,” Gilman explains. “We need a method that won’t penalize medical marijuana users or others with insufficient amounts of cannabis in their system to impair their performance.”

“While it requires further study, we believe brain-based testing could provide an objective, practical and much needed solution.”

Using the HbO response to gauge impairment was more accurate than the extended field sobriety test (eFST), at around 76 per cent compared to 69 per cent, and it had a lower false-positive rate than the eFST, at 10 per cent versus 36 per cent. 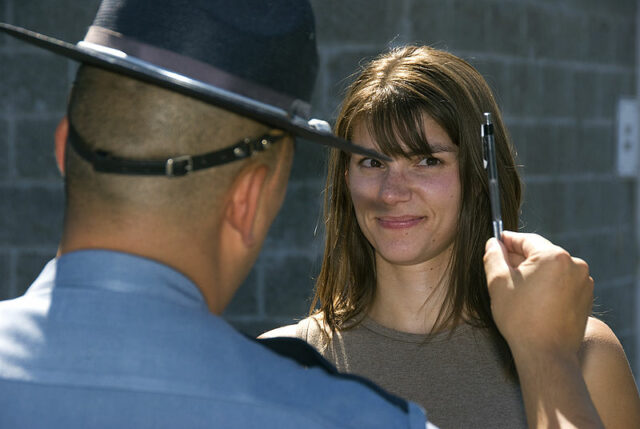 Extended field sobriety tests include the walk and turn test, one leg stand and horizontal gaze nystagmus test (pictured above), among other assessments. Image by Oregon Department of Transportation via Wikimedia Commons

Without a reliable biometric test, impairment due to cannabis intoxication has been measured and defined legally in many places using eFSTs during traffic stops, according to the study. But those tests have been found to be prone to false-positive bias.

A recent pilot study out of Switzerland found that smoking high-CBD cannabis didn’t significantly impact driving ability even though participants were over the legal limit for THC.

Previous studies have reported links between THC-rich cannabis and physiological impacts, and between impacted driving ability and THC blood concentrations.

Studies from Canada and the U.S. have also concluded that legalization hasn’t resulted in higher rates of traffic injuries or fatalities.