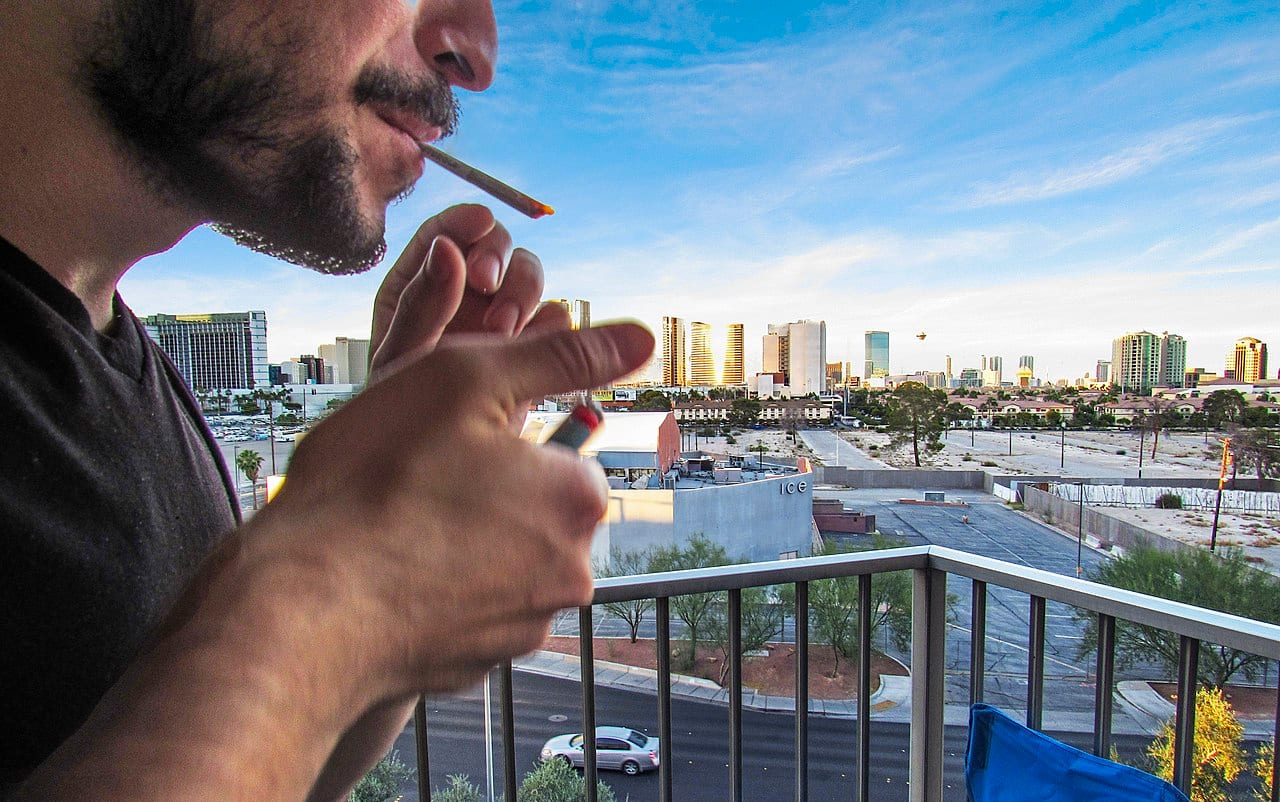 On Sunday, March 15, 2020, as whispers of a new reality called “social distancing” began to settle into the everyday lives of Canadians, Natalie Barthel was having a panic attack.

But then her housemate came home and they went for a nice, long walk.

“And I actually got a CBD-based drink that afternoon, which was still psychoactive in some ways,” she said. “They recommended that you take it really slowly and so I just sipped it over a long period of time.”

Barthel said the fizzy, lemon-lime beverage really helped to calm her down, even though she had started to already.

The 24-year-old Vancouverite said she’s upped her cannabis usage since the coronavirus pandemic began sending Canadians inside. And she’s far from the only one to do so.

To avoid overloading the health care system, Canadians were asked to practice social distancing before it became mandated by government. Image by Siouxsie Wiles and Toby Morris via Wikimedia Commons

Cannabis retail has seen an unprecedented boom in the world’s legalized regions, many of which are now deeming weed necessary to society. Ontario, Quebec and now Saskatchewan have all named it as “essential,” allowing weed stores to avoid the lockdown status of less requisite businesses.

To experienced users, the phenomenon of getting high before doing things around the house is a way of life more than an activity. But for a nation new to legal weed facing the stress of COVID-19, it begs the question: Can cannabis actually help Canadians cope with social distancing?

Zach Walsh, an associate professor of psychology at the University of British Columbia, says it’s a very human thing to use substances to moderate levels of arousal, which often come in the form of anxiety and stress.

“So, I think the question becomes: What’s the consequence?” he said.

Whether it’s alcohol, cannabis or binge-watching a TV show, if the consequences aren’t dire, be kind to yourself, Walsh says — there’s nothing wrong with enjoying simple pleasures in a time of stress.

Unlike alcohol, weed can be therapeutic for the body and mind

But stress also comes in physical forms. A lot of physical stress is released during physical activity, which is harder to get when you’re confined to the indoors.

While Barthel says cannabis can be great for stoking more giggles when she and her roommate watch a movie together, the main reason she’s increased her use lately is to compensate for physio and other therapeutic exercise that’s a part of her usual, non-quarantined routine.

Barthel has a form of Ehlers-Danlows syndrome (EDS), a genetic disorder that affects connective tissues in the body. As a result, her muscles have to be extremely tight to compensate for her loose ligaments. Activities like physio and pilates help to manage her symptoms, which are much harder to come by when most of the world is under lockdown.

Countries that have been hit hard by COVID-19, like Spain, have been under full lockdown for weeks. Photo by Pacopac via Wikimedia Commons

After suffering a major concussion in 2018, weed really started to come into Barthel’s life as a pain management tool. Whether it was for relieving physical symptoms, dealing with the stress of trying to maintain a job, or when it became hard to differentiate between the two, she said cannabis would allow her to calm it all down.

“It was very hard to differentiate all the time and I’d be like, ‘Is this just me, or is it my body?’” she said. “I think cannabis really allowed me to take it down a notch to a place that was manageable.”

Unlike alcohol — a popular depressant which has also experienced recent waves of shelf-clearing — the complex chemistry of the cannabis plant has huge therapeutic potential. As its legal status has become more liberalized, millions of dollars have been dedicated to researching weed as a potential treatment for physical ailments including muscle fatigue, cancer and post-traumatic stress disorder.

“I personally have gone from consuming alcohol as a teenager to really choosing weed — at least for a fun experience or a release,” Barthel said, who has a degree in neuroscience. “Primarily because the way alcohol acts on the brain is it just depletes you of everything.”

For Walsh, who directs a lot of his research at how people use cannabis as a substitute for other substances like alcohol, the risks associated with cannabis are much lower. He also noted that he doesn’t expect an uptick in problematic use following the pandemic.

Weed can shift your way of thinking

Like Barthel experienced with her fizzy drink, and what many socially distanced people are looking for right now, research shows cannabis can shift your way of thinking.

“It allows you to break those chains of repetitious thoughts,” says professor Walsh.

In some of the research he’s done on chronic pain, it’s not always about reducing the pain itself – it’s about moving your focus away from the pain. And weed can help with that, he said.

“It helps me to have a good time despite the fact that I’m in pain. And perhaps with all the worries that people are having about COVID, it can be the same thing,” Walsh said. “It’s certainly not going to make the concerns go away, but it might give you a time where you’re not so worried about it or you’re able to enjoy other things despite your concerns.”

From a lay perspective, weed seems to go well with a lot of home activities: Listening to music, watching movies, playing board games and even doing chores. Walsh says this association is backed by science.

Cannabis interrupts regular activity in the hippocampus, the part of the brain where memory storage and retrieval takes place, which Walsh says can manifest as being more present-minded.

“So, maybe that’s part of it,” he said. “All of those things that you talked about are kind of cognitive flow activities: Whether it’s watching a movie, playing a game, listening to music — they’re all about being in the moment rather than in the past or the future.”

But for those who are worried that a bit of fun now could turn into a negative habit later, Walsh says to practice intentionality.

Will the handshake ever return to its former glory? Image by Siouxsie Wiles and Toby Morris via Wikimedia Commons

“I think absolutely intention is huge with cannabis,” he said. “I would say the piece of advice to people using cannabis during this time is to be mindful of why you’re doing it.”

There’s an increased risk of use becoming compulsive when you’re stuck at home in the absence of natural constraints, so Walsh recommends to remind yourself about why you’re using it and what your aims are.

It could actually be a really good time to give cannabis a go, according to Barthel, given that you can find a sense of safety within yourself.

“I don’t think it’s gonna cure your anxiety from the pandemic that’s outside, but it’ll be a nice distraction,” she said. “Or at least a cool point to be like, ‘Oh, I was calm like that. Maybe I could return there.’”