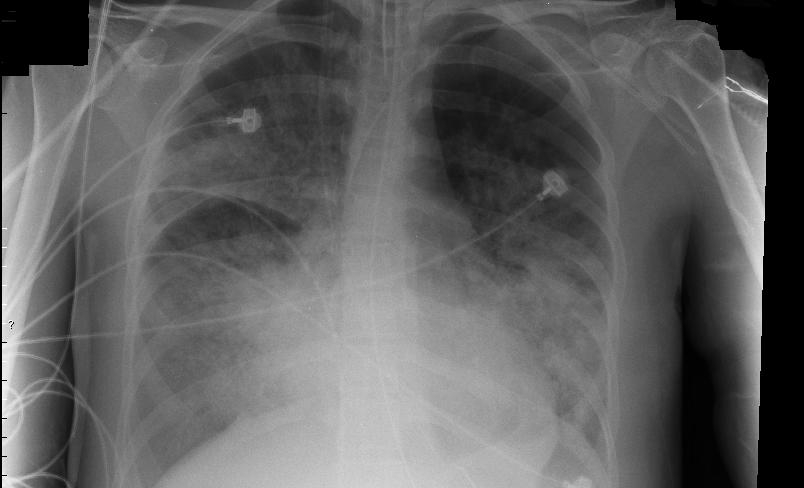 An X-ray of a patient with acute respiratory distress syndrome. Image by Samir via Wikimedia Commons

On Wednesday, the company said the $4.5-million participative loan will come from the ministère de l’Économie et de l’Innovation under the biomed propulsion program.

According to Tetra, the funding will support development of ARDS-003 for acute respiratory distress syndrome (ARDS), whether caused by Covid or not. The formulation will also be tested for its treatment of sepsis, the body’s extreme response to an infection.

The transaction is conditional to shareholder approval, which will be decided at a general meeting in May, as it would involve moving the firm’s head office to Quebec from Ontario. More than 60 per cent of Tetra’s staff are already located in Quebec.

The support for Tetra will lead to the development of medication to treat ARDS, such as in severe cases of Covid-19, Economic Minister Pierre Fitzgibbon said in a statement.

“Our government will always be there to support potentially life-changing initiatives for the population, especially when they contribute to the vitality of the Quebec life-sciences sector and Quebec’s reputation in the field of biotechnology.”

Tetra CCO Steeve Néron says his company has been the subject of several diligent reviews by the province’s economic ministry and Investissement Québec, which validates the firm’s scientific, financial and commercial approach.

“In addition, the MEI/IQ adheres to the strategic vision of the team of scientists and managers behind the development of our products. I know that investors have been waiting for this announcement for a long time and I am delighted that it has finally arrived.”