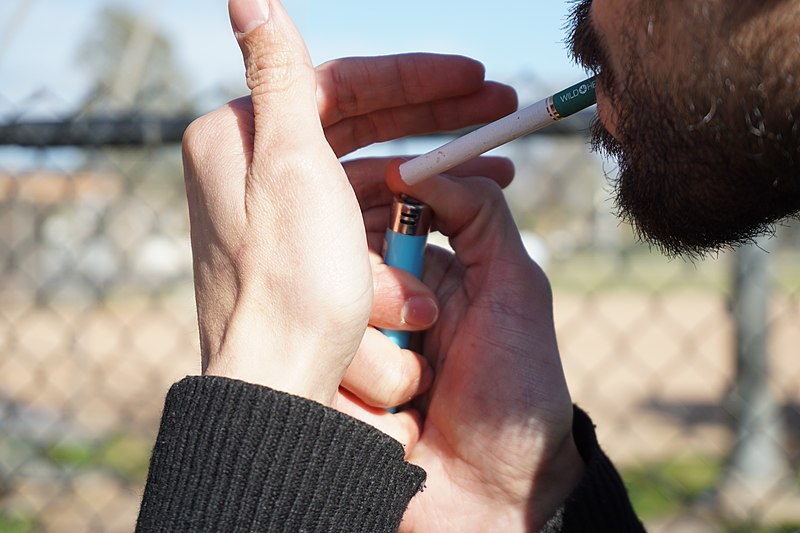 A group of international researchers have found a possible link between the use of CBD cigarettes and patients with schizophrenia or psychotic disorders taking less antipsychotic medication, according to the results of a recent clinical trial.

Published in Frontiers in Psychiatry in November, “Cannabidiol cigarettes as adjunctive treatment for psychotic disorders – a randomized, open-label pilot study,” is said to be the first study evaluating the effects of smoked CBD-cigarettes as a complementary therapy for psychotic symptoms.

A team of researchers from Canada, Switzerland and Germany conducted the trial where patients were given CBD or placebo (tobacco) cigarettes along with their daily treatment for 28 days.

Overall, both groups saw similar reductions in psychotic symptoms and depression. However, the CBD group used less antipsychotic medication while those in the placebo group used more.

“Smoked CBD might offer a harm-reductive intervention in psychotic patients with tobacco dependency and comorbid cannabis use,” researchers say. “However, future studies with more rigorous study designs and larger samples are needed.”

Previous research has found CBD administration has anxiolytic and antipsychotic effects on humans, and its use is linked to changes in brain activity that may lower some people’s risk of a psychotic episode.

While THC can cause temporary dose-dependent psychotic symptoms, researchers note that some clinical findings suggest CBD has a different effect. CBD has had a positive impact on patients with schizophrenia, psychotic symptoms, or people who are at high risk of psychosis, they add.

For example, a double-blind, randomized clinical trial to assess the effects of antipsychotic medication amisulpride — one of the most effective drugs used to treat schizophrenia — versus CBD showed both medications demonstrated “similar, significant antipsychotic efficacy,” but that CBD displayed “a superior side effect profile.”

“As encouraging as previous study outcomes have seemed, recent systematic reviews found only mixed evidence supporting the antipsychotic efficacy of CBD and call for further, more extensive investigations,” researchers say. “Despite the debatable effectiveness of CBD in psychotic disorders, treatments with CBD displayed a favorable side effect profile relative to standard pharmacological therapies.”

For the CBD cigarette study, 31 acutely psychotic patients who smoke cigarettes participated in the trial, with 71 per cent of them being male. The average age was about 35 years old, and almost 52 per cent of participants used cannabis. 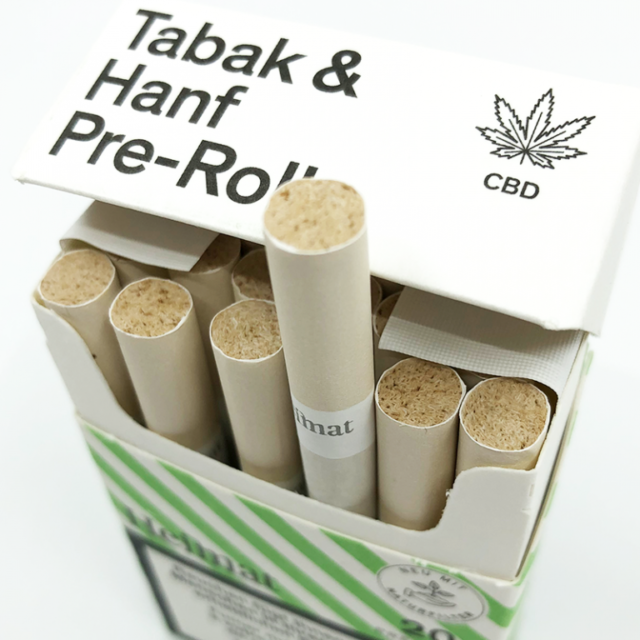 CBD cigarettes were from the Swiss tobacco manufacturer Heimat, and were 20 per cent hemp and 80 per cent tobacco. Each pack had 20 CBD cigarettes with 4 grams of Swiss hemp and a concentration of 10 per cent CBD and less than 1 per cent THC. Image via Heimat

CBD cigarettes — obtained from swiss tobacco manufacturer Heimat — contained 20 milligrams of CBD. The placebo cigarettes, containing only tobacco, were from the same manufacturer.

Participants in the CBD group smoked nearly 10 CBD cigarettes a day on average.

Given the strong smell of the CBD cigarettes, the researchers say they didn’t use any blinding procedures, which was a limiting factor, and the staff and participants could easily tell the difference between the two kinds of cigarettes.

Researchers acknowledge the clinical trial had a low number of participants and a high dropout rate, and a larger sample with a more rigorous study design may show different results.

Researchers suggest the higher drop out rate for the placebo group could be, in part, because the participants knew they weren’t getting the CBD cigarettes and didn’t see a point in continuing.

The non-CBD cigarettes used weren’t “well accepted” either, so researchers suggest that it may be beneficial to use a preferred brand in future studies.