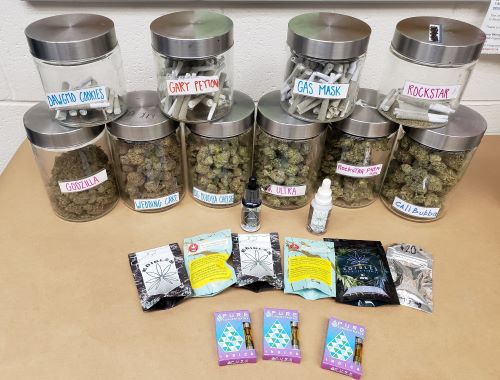 Police in Burnaby say they’ve shut down an illicit storefront selling cannabis and other drugs.

In a statement Thursday, Mounties say an investigation started after a tip came in about a teen who allegedly bought cannabis from a storefront on Hastings Street and Beta Avenue.

The store’s signage was for a tattoo studio, but it was operating without a business licence set up as a “drug dispensary,” according to police.

Through the use of a search warrant, RCMP accompanied by bylaw officers raided the location on Feb. 18.

Burnaby RCMP officers have shut down an illegal dispensary after the store allegedly sold drugs to an underage teen.
Cannabis, magic mushrooms, and suspected MDMA were seized.
Details: https://t.co/SSddv1zjxh pic.twitter.com/jdbYFcuyn8

Police seized cannabis products, psilocybin mushrooms and what they suspect is MDMA.

“It is of particular concern to our officers and to the community that an underage teenager was allegedly able to purchase drugs from this location,” says Cpl. Mike Kalanj.

He warned of the risk of buying and using unregulated drugs.

Read more: $13M in cannabis and psilocybin seized in Alberta and BC raids