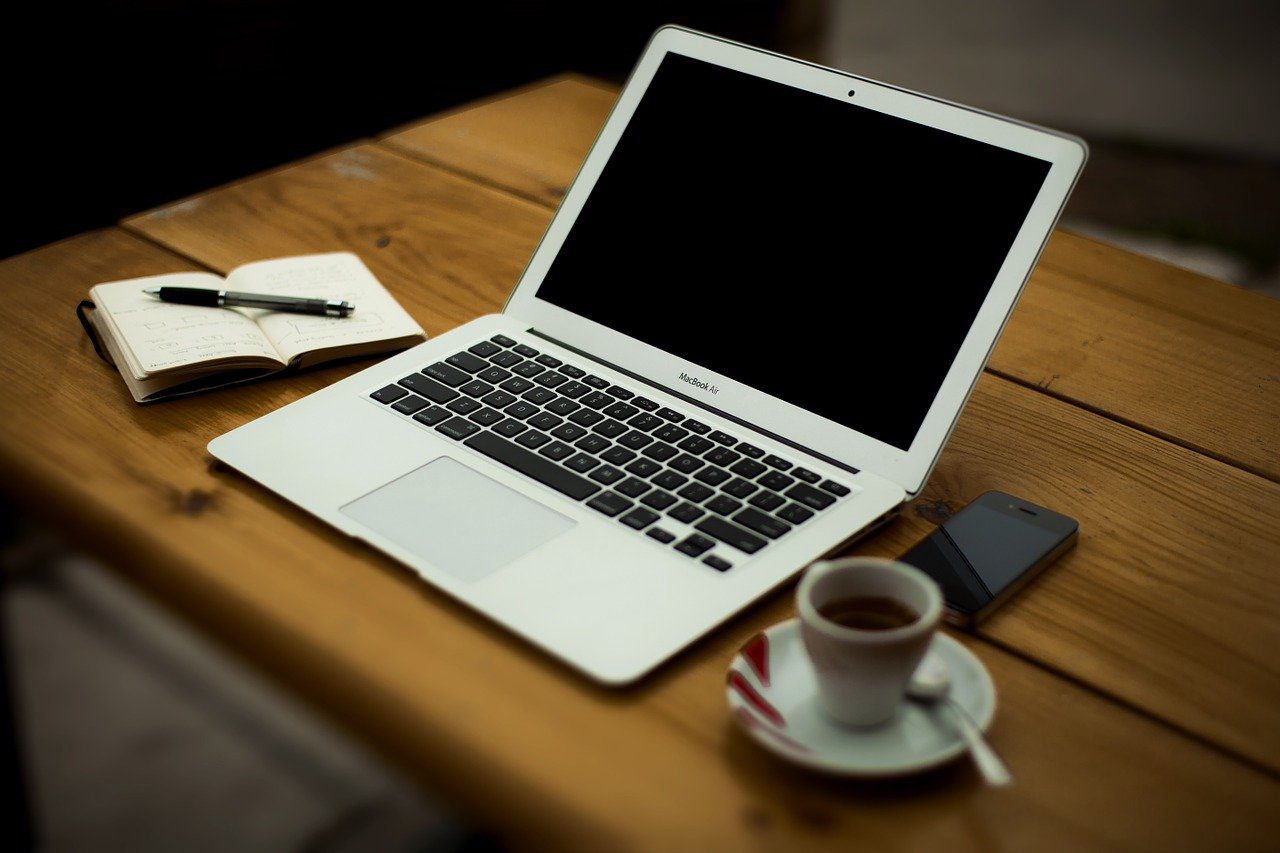 15% of remote employees smoked weed while working from home during the pandemic, according to a survey. Image via Pixabay

As many employees have adjusted to remote work during the pandemic, polling data shows some workers are using weed at the home office to reduce stress.

A survey from AmericanMarijuana.org has found about 15 per cent of remote employees have smoked pot while working from home with Covid-19 at large.

“The relatively recent onset of legally enforced social isolation policies as a result of Covid-19 begs the question of whether there is some sort of association between the pandemic and recreational substance use now within the larger workforce, especially while employees are working from home,” reads the survey. “It’s also increasingly difficult for management and co-workers to virtually monitor a respective employee’s activity throughout the workday.”

For the results, 1,001 full-time remote workers were surveyed using Amazon Mechanical Turk, a crowdsourcing marketplace. Through self-reporting, respondents shared their thoughts on getting high while working remotely.

Overall, more than half (52.9 per cent) of remote employees pointed to decreasing stress as the number one reason they’ve been under the influence during a workday. Increased creativity and productivity were also cited as top benefits, at 51.1 per cent and 42.6 per cent respectively. 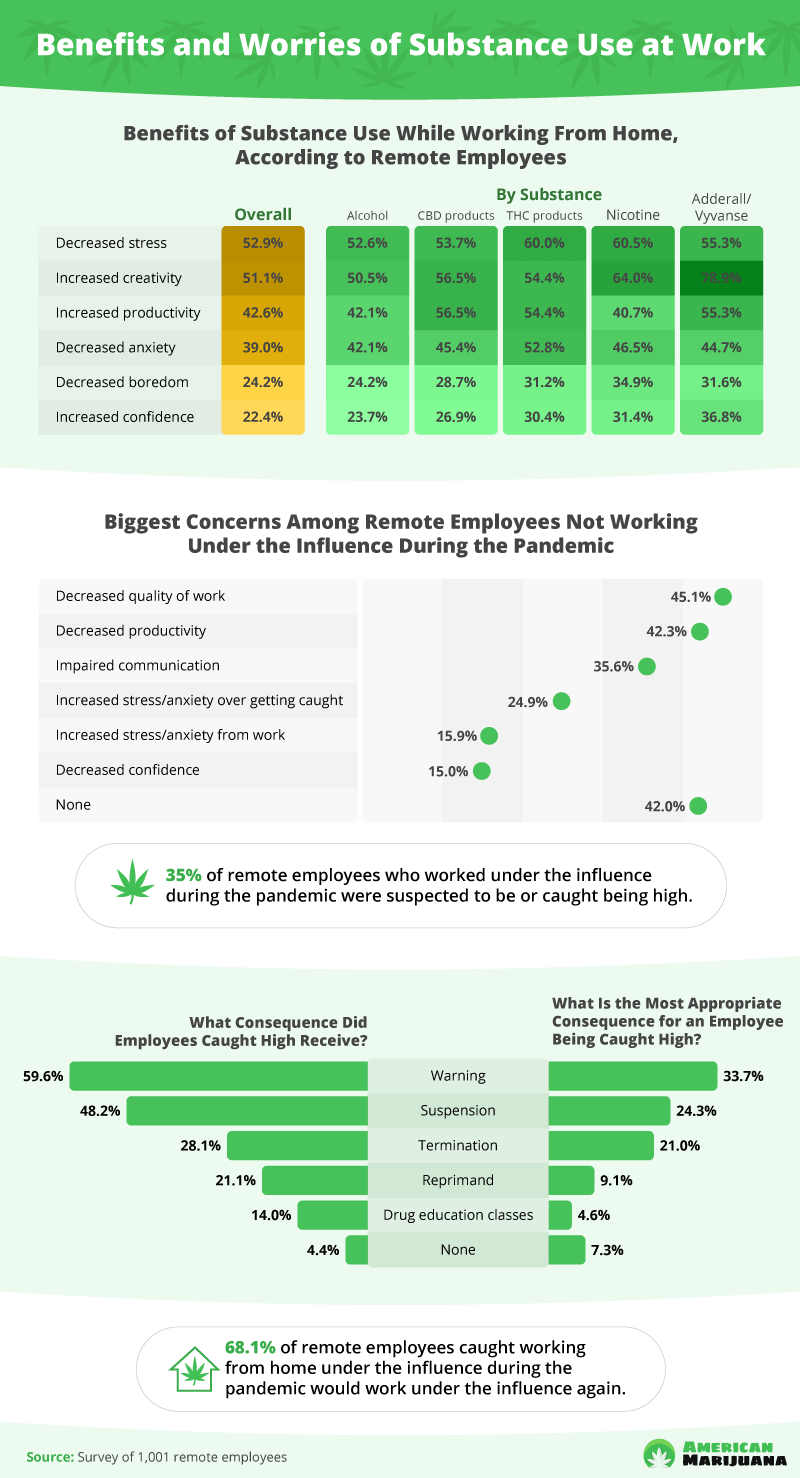 Reducing stress is the top reason for substance use during the workday. Chart via AmericanMarijuana.org

There isn’t a notable difference when breaking the results down by gender, with slightly more women (37.9 per cent) than men (36.6 per cent) saying they’ve been high while working from home.

In the 20–29 age group who regularly smoked weed before the pandemic, more than 41 per cent did so while working from home during the health crisis, compared to 29.8 per cent of remote workers aged 50 and older. 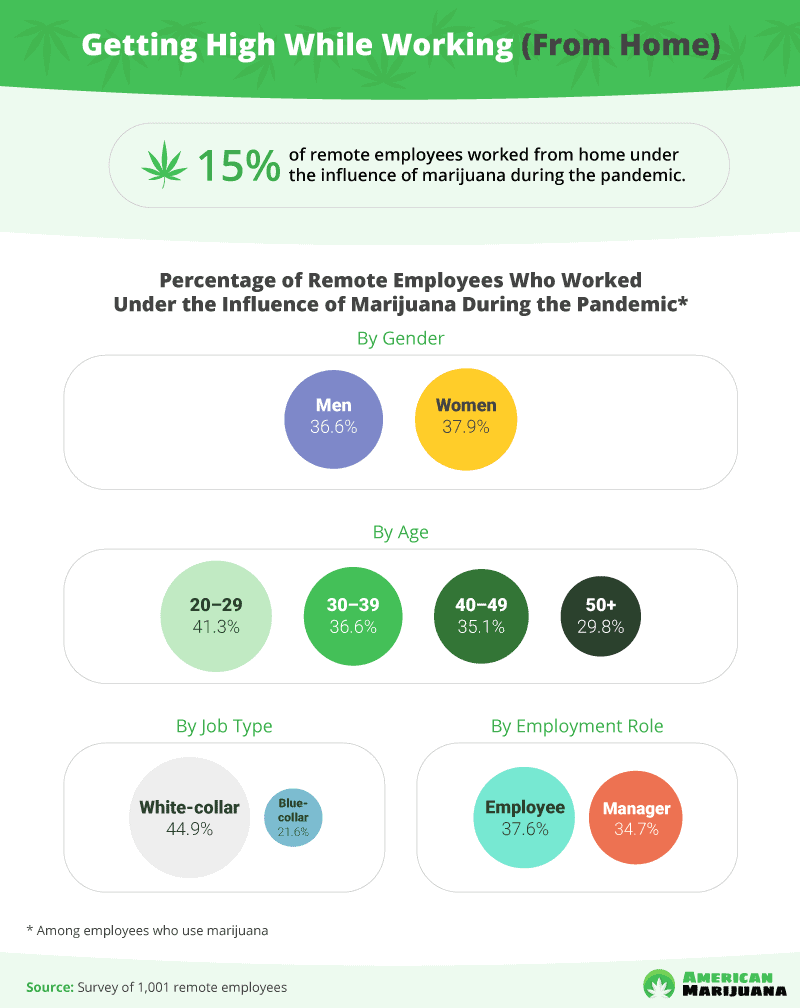 There’s a notable decrease in pot smoking from younger to older remote employees. Nearly 45% of ‘white collar’ employees say they’ve worked under the influence of cannabis. Image via AmericanMarijuana.org

More employees getting high during work but it isn’t habitual

For 47.3 per cent of people, their first time getting high at work from home was during the pandemic. Before the health crisis, 52.7 per cent say they had been under the influence while working at home at least once.

But 78 per cent of people indicated that getting high during work at home wasn’t a habit while 23.7 per cent said they were under the influence at least once per day throughout the workweek.

If a remote worker is getting high at home during the pandemic, it’s usually during a break or near the end of a shift.

While most people aren’t taking tokes before jumping on a Zoom call, almost 11 per cent said they smoked pot before a stressful meeting.

Quite a few remote workers (28 per cent) wanted to share a joint with coworkers, and 17.8 per cent hoped to smoke up with their boss. About 13 per cent said they wanted to smoke with both.

Over-the-counter medications and alcohol are the most commonly used substances by remote employees working from home, while psychedelics were far from the top spot. CBD products were preferred over THC products for worktime use. 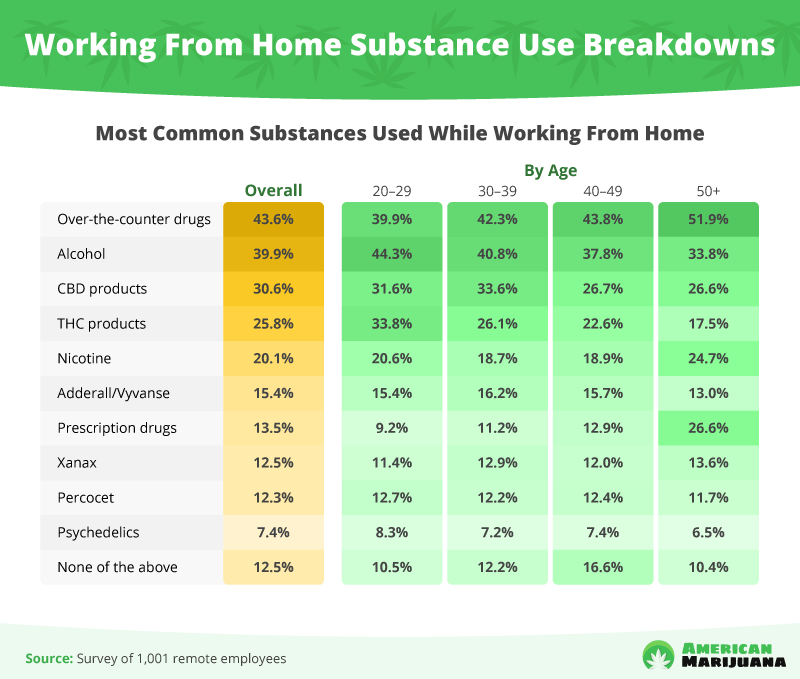 Over-the-counter medications are the most used substance while psychedelics are the least used. Chart via AmericanMarijuana.org

“Now, it’s rather obvious how the accessibility, legality, and purpose of OTC medications may cause this outcome. It similarly seems apparent why psychedelics are uncommon in the workplace. It’s unlikely mid-shift hallucinations would produce a high-yield workday,” reads the survey.